Characters added to Beast Wars in the comics and/or Japanese cartoons, in additon to the toy lines. See the main Characters index here. 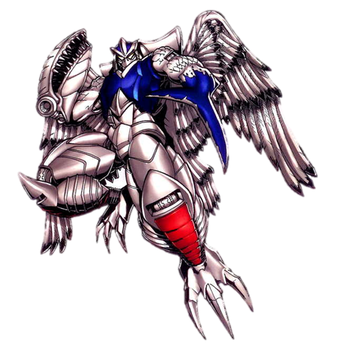 "If you see me, you've already lost."
A Maximal of few words, he's a Fuzor with a Hawk and Hammerhead Shark Beast Mode. His aerodynamic structure helps Air Hammer to be equally dexterous in water as in the air. 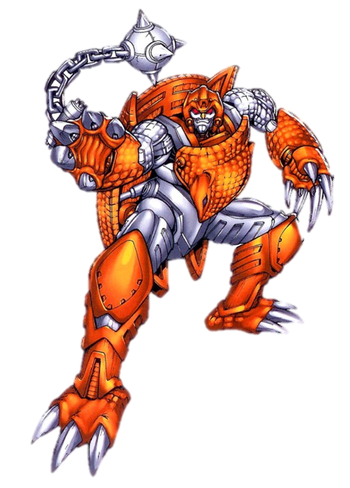 "Be patient and victory will come to you."
A master mechanic and explosives expert who carts a vast array of tools and devices around beneath his heavily armored shell. 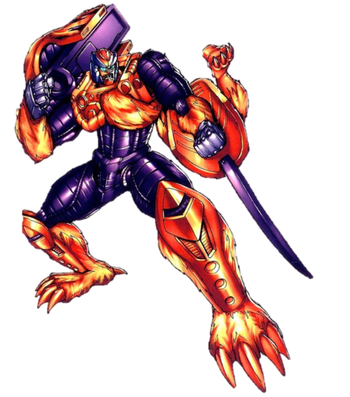 "Patience may be a virtue, but a punch-up is pure delight."
A Maximal Fuzor who relishes in the boosts in power that his animal fusion gives him. He is a natural warrior in total flux with the ways of combat. 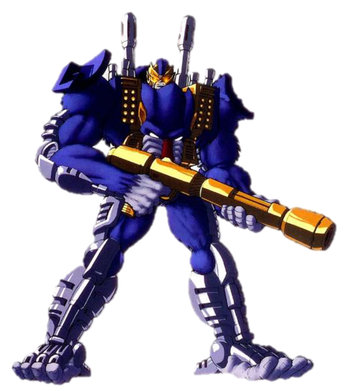 "Show me the wall...I'll bang my head against it."
B'Boom is one of the fiercest and most unpredictable of the Maximals. A heavy-hitting bot that turns into a metallic-blue organic mandrill B'Boom is an expert in guerilla warfare. 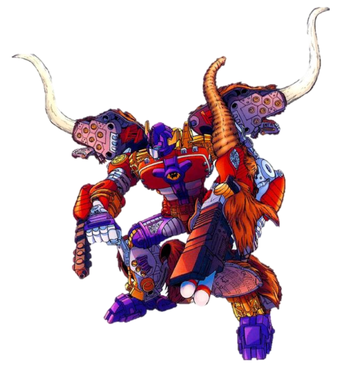 "All for one and one for all."
The main character of Beast Wars Neo, Big Convoy is an astoundingly powerful warrior but prefers being alone, heading onto battlefields by himself. He wields the Big Cannon, which can blitz enemies with a single shot. On orders from Vector Sigma, Big Convoy has been appointed as an instructor to a group of young warriors where's he's pulled into the quest of stopping the revival of Unicron. 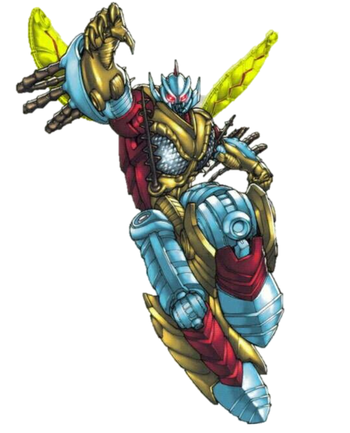 "Don't do anything I wouldn't."
Leader of the Insectron forcesm who became sick of the ceaseless wars plaguing Cybertron and encouraged his comrades to find peace by wandering the universe. 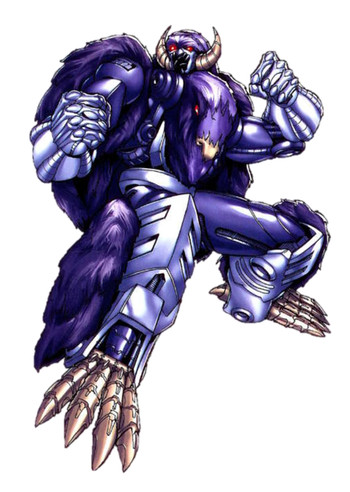 "Three heads are better than one: headfirst, headlong, headstrong."
A stubborn and strong Maximal who loves to battle Predacons, Bonecrusher charges into battle with head and horns that are super-reinforced to withstand any impact. 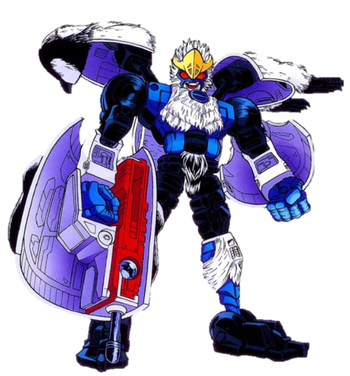 "The light of my spark will dispel the darkness of evil."
A Maximal recruit that appears in the Beast Wars Neo cartoon who wants to be the best. 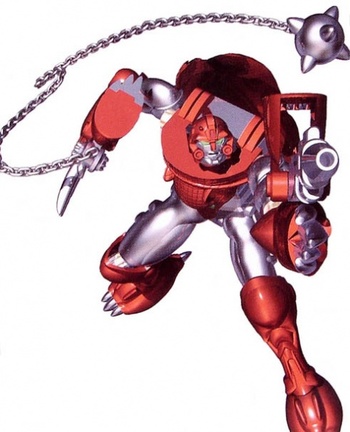 "The secrets of the universe reveal themselves to those who open their minds."
A Maximal who's exceedingly reserved of character, but is a genius inventor. 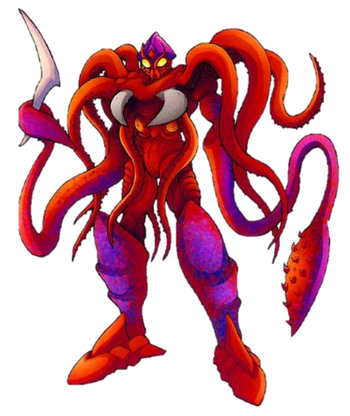 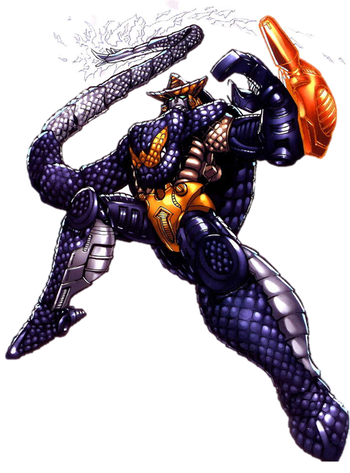 "I have no time for patience!"
Cohrada is a lone wolf Maximal cobra who appears in the Beast Wars Neo cartoon, later joining up with Big Convoy's Maximal crew. 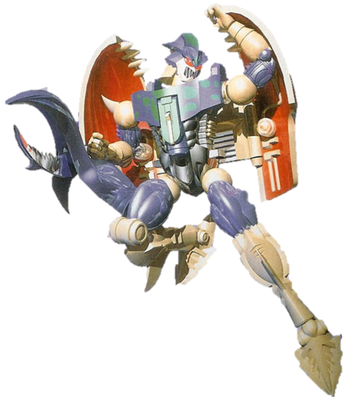 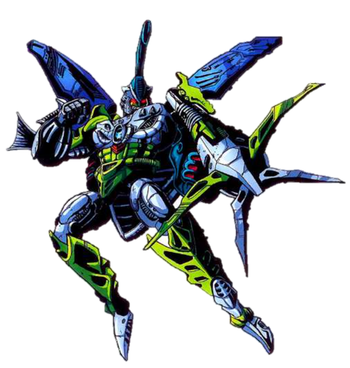 "The Ocean Depths conceal all intentions."
"One cannot cross a sea merely by standing and staring at the water."
A Maximal who is a skilled tracker and expert in undersea combat, Cybershark hunts the pirate Seacons for centuries. 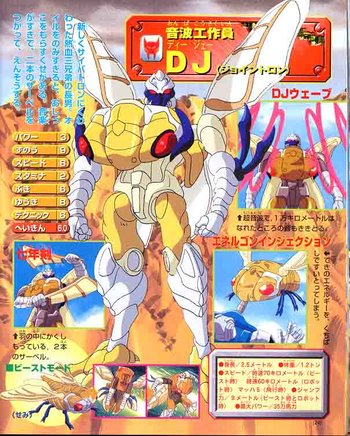 DJ is the eldest of the three Jointron brothers that appear in the Beast Wars II cartoon. He's just as dumb as the rest of his brothers. 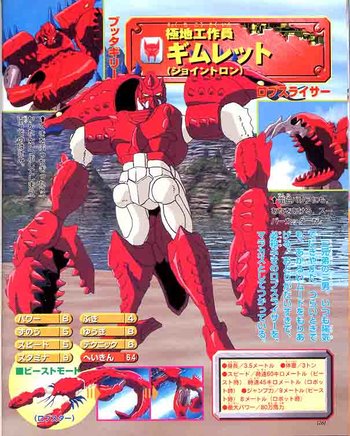 Gimlet is the youngest of the Jointrons. He appears in the Beast Wars II cartoon alongside his brothers; he's dumb as the rest of them. 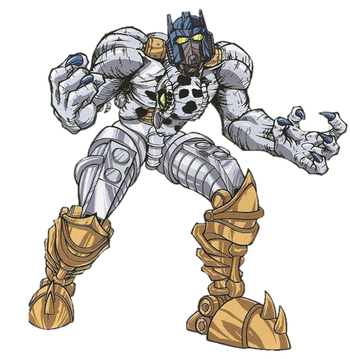 "Me Grimlock, king of beasts." 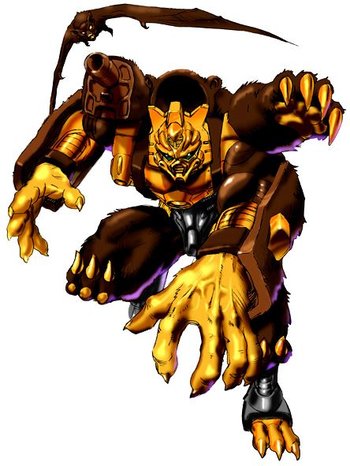 "Sometimes crazy works." note Yes, it's the phrase spoken twice by Optimal Primal in the cartoon.

A Maximal who could turn into, you guessed it, a grizzly bear. Grizzly-1 is a legend in the Beast Wars, going missing during a mission to the artic before being reawoken and returning to battlelines. He forms a team with his robotic bat partner Nightshriek.

"Laugh and the world laughs with you; howl and you howl alone."

"Loyalty means nothing unless it is based upon self-sacrifice."

"If you do not think before you act, do not act at all."

"There are no speed limits on the road to victory."

"May wisdom nourish my spirit and courage guide my sword."

"Between peace and chaos lies the courage to act."

"Tell your friends a lie. If they keep it secret, then tell them the truth."

"Knowing the right thing to do and not doing it shows lack of courage, principles or both."

"Vigilance is the hallmark of a good defence."

"The best place to hide something is where everyone can see it."

"Peace is maintained through the preparation for war."

"Chaos is just the state before order."

"Logic provides the structure to be filled by the soul of creativity." 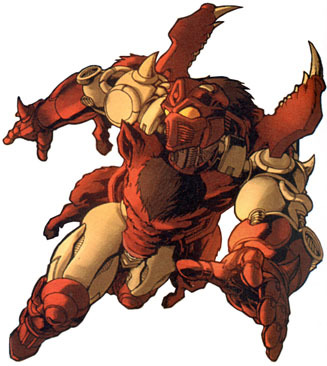 "Watch for my hidden depths. They'll be your downfall."
Razorbeast is a stubborn infantry fighter with great strength and tenacity befitting a warthog. He will keep struggling and fighting ferociously against all odds, no matter how hopeless the situation.

"The greatest darkness is the one created by ignorance."

"Depend on yourself and you will never have anyone else to blame for failure."

"Too much thinking results in too little action."

"Listen to others only when they say what you want to hear."

"A strategic retreat is better than a tactical defeat."

"Nine-tenths of the battle is fought within the imagination."

"Fall in line or fall-out."

"Tyranny cannot topple those who stand united against it."

"The strength of wisdom and the power of youth are an unbeatable combination."

"We are but parts of a whole."
Predacons 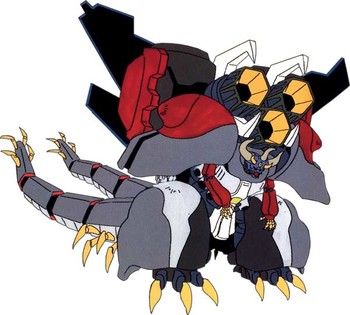 Majin Zarak is a massive monster of a behemoth pulled from Cybertron's past to aid Galvatron's forces in battle. This titanic killing machine is capable of storming the battlefield from both land and sea, thanks to his amphibious aircraft carrier alt mode. 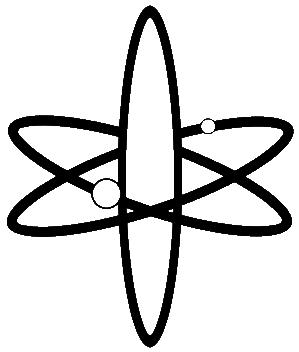 The Mutants, aka the Mutant Beasts, are a powerful group of Transformers who've lost their robot modes but can instead transform between two beast modes. Though they still retain their original heads from their robot modes, albeit hidden. The Mutants are led by Icebird and seek to create a purely organic existence. The Mutants are mainly neutral and will attack any Predacons on sight but tolerate and ally with the Maximals as a necessary component of their goals. 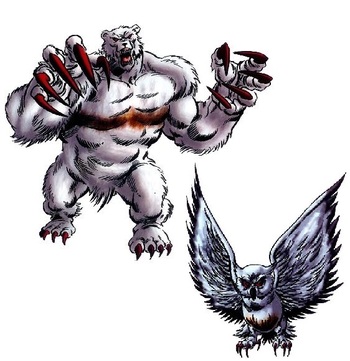 "He who fights with monsters should take care lest he becomes a monster."
The Sage-like leader of the Mutants, Icebird is very wise and powerful. He lost his robot mode long ago and instead gained two beast modes, transforming from a snow owl to a polar bear.