The various characters belonging to the United Peacekeeping Republics of Gearbox's game Battleborn.

A collection of civilizations banded together under the banner of mutual protection, freedom, and equality, the nomadic UPR – like the other factions – now find themselves in Solus with no home to call their own. Though recently crippled by the secession of one of their strongest constituents, the Last Light Consortium, the UPR remains nonetheless committed to their idealistic sense of justice. 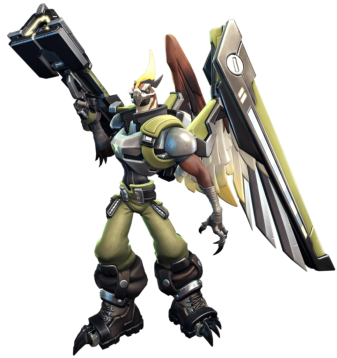 Brash and arrogant August Benedict loves three things: himself, rockets, and himself. A decorated war hero, he fought bravely to defend his homeworld, Madan, when the Varelsi arrived. As a result of the battle, he was gravely wounded. His left wing was utterly shattered, rendering him incapable of unassisted flight. Benedict and what remained of his people – called, "Aviants" by those in the Solus system – evacuated as their home star was plunged into darkness. Since then, Benedict’s been outfitted with an Aviary Exosuit that grants him limited flight capabilities. And he’ll be the first to remind you of how awesome he is in battle. So, yeah, while he is an accomplished solider, he doesn’t have many friends. Or any.

Benedict is a Peacekeepers Attacker. Initially, he was unlocked as a playable character upon reaching Command Rank 10 or by winning 5 matches as a Peacekeeper character. After the Winter Update though, he and the rest of the core 25 Battleborn became all unlockable after completing the Prologue mission. 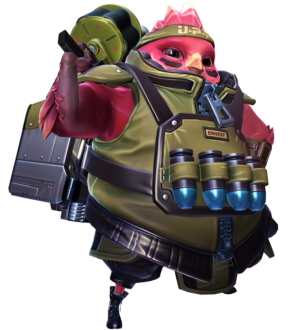 Ernest is explosive on the battlefield, but he isn't in this fight for glory or vengeance. Some might call him a well-aged boy scout, but Ernest's sense of honor and duty brings a new means of support and defense previously absent from the Peacekeepers – this is no small part thanks to his grenade launcher. The various explosive ordinance rounds help Ernest lean on the offensive or provide a mean line of defense for his team. As one of Menneck B's premiere demolitions experts, he's a brilliant tactician, known for his "outside the box" perspective on decimating his foes.

Steadfast, courageous, and prepared for just about any threat, Ernest Igrin is a paragon of the Peacekeeper ethic: strength through unity, and through strength, liberation for all!

Born to a family of soldiers, Ernest always believed it was his destiny to die in the service of his people, on the field of battle. But his path veered a bit when, at a young age, Ernest demonstrated a keen understanding of rescue operation logistics, cleaning up after disasters and coordinating demolition projects to free survivors of earthquakes and other natural disasters.

As the Varelsi scourge reared its miserable head in Ernest's native Menneck system, though, the demobird felt powerless to do anything about it, cleaning up the aftermath. That's when Ernest signed up for general combat duty in the UPR. Ernest's considerable talents with explosive ordinance translated fluidly to combat, and he accomplished much in his three years alongside the Rapid Deployment Corps.

When the war finally arrived on Menneck’s doorstep, Ernest begged for reassignment to his home system. The aviant that returned was different than the one who left. His optimism, tempered and hardened. His spirit and devotion to his people, however, remained intact. In the battle to save Menneck, Ernest served on the front lines of the evacuation. Following his homeworld's darkening, Ernest returned to the United Peacekeeping Republics as an instructor, readying new recruits for the conflicts ahead.

Ernest is a Peacekeepers Defender. He's the third of the five new free heroes

announced to be released post launch of the game, the 28th Battleborn. He was officially released

on September 1, 2016. However, for players who own the Season Pass or the Battleborn Digital Deluxe Edition, they got to play Ernest a full week early on August 25, 2016. He can be unlocked as a playable character using 47,500 in-game credits or for Digital Deluxe and Season Pass holders, by using the hero key that accompanies with him on release to unlock him instantly. 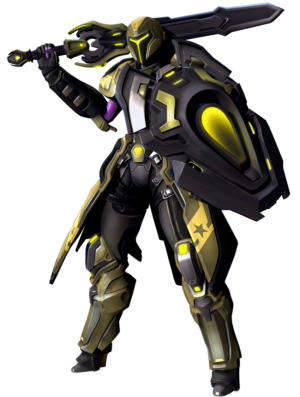 Galilea Azmozeus began life as a warrior for the Arbiters of Being, an Eldrid order charged with forcefully opposing universe-altering Jennerit technologies. On an extended deep cover mission to destroy their secret Sustainment engine, Galilea was wounded and transformed by the dark energies she sought to sabotage. Her transformation left her partly immortal but consumed by dark powers she couldn't understand or control. So, she exiled herself to the remote icy moon of Bliss, where she sought solitude and redemption. Stories soon spread about the Wraith of Bliss–a dark and dangerous being who haunted the old temples there. After the Peacekeepers settled the moon, Galilea was recruited to their cause for one last chance to redeem herself by saving the last star.

Galilea is a Peacekeepers Defender. Initially, she was unlocked as a playable character upon reaching Command Rank 12 or by killing 800 minions of any type. After the Winter Update though, she and the rest of the core 25 Battleborn became all unlockable after completing the Prologue mission. 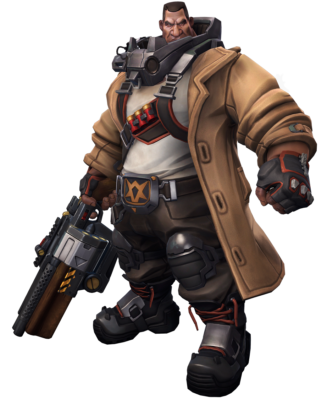 Former engineering chief and operative of the Peacekeepers, Trevor Ghalt is known as the "First Battleborn", issuing the famous letter to the factions to "Live together, die alone." A capable and even-handed friend and commander, Ghalt wields charisma and shotguns with equal effectiveness on the battlefield.

Ghalt is a Peacekeepers Defender, previously classified as an Attacker. Initially, he was unlocked as a playable character upon reaching Command Rank 40 or by earning a Silver rating on all Story missions on Advanced difficulty. After the Winter Update though, he and the rest of the core 25 Battleborn became all unlockable after completing the Prologue mission. 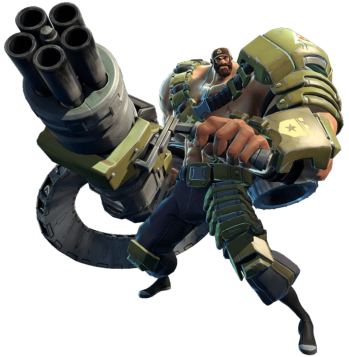 When he's not clotheslining bears for fun, Montana can be found on the battlefield, soaking up industrial-sized buckets of hurt and suppressing enemies with his fearsome minigun. A friend to everyone, Montana controls the Battlefield with sprays of ice or fire, and sometimes just a good old fashioned knock-the-tree-down-with-my-shoulder dash.

Montana is a Peacekeepers Defender. Initially, he was is one of the few initial playable characters unlocked after completing the Prologue mission. After the Winter Update though, the rest of the 25 core Battleborn joined Montana and these few in being unlockable after completing this mission. He is the main character featured in the fourth DLC Story Operation "Montana and the Demon Bear".

A discarded clone soldier from a long-forgotten war, Oscar Mike is a capable front-line fighter, engaging enemies at range with his assault rifle, cloaking for quick exits from tight spots, and inspiring allies with his... unconventional personality.

Oscar Mike is a Peacekeepers Attacker. Initially, he was is one of the few initial playable characters unlocked after completing the Prologue mission. After the Winter Update though, the rest of the 25 core Battleborn joined Oscar Mike and these few in being unlockable after completing this mission. He is the main character featured in the third DLC Story Operation "Oscar Mike vs. the Battle School".

The UPR Nova is Trevor Ghalt's ship and a sentient character as well due to being a Magnus herself. When Ghalt went AWOL after Penarch, he naturally took Nova along with him to aid him in the formation of the Battleborn. Since the creation of the Battleborn, Nova has become essentially the mobile base of the eponymous group, typically serving to deploy Battleborn on missions and pick them up afterwards.

Outside of missions and such, Nova serves as the typical computer guide that gives explanations and the like in the command menu. In Multiplayer matches, she's the match announcer.

The RDC
Voiced by: Jim Foronda

The RDC was created by the UPR to be used as soldiers, primarily for the Garden Campaign. After the campaign, the Mike clones settled on a planet which they dubbed Planet Mike and established the Kingdom of Mikes. However considering what was happening in the universe, Planet Mike was veiled by the Varelsi. Fortunately, General Mike was able to get King and Queen Mike onboard a shuttle, along with a single cloning vat, and escape the planet just before it was veiled. Together, these three reestablished the Kingdom of Mikes again from scratch.