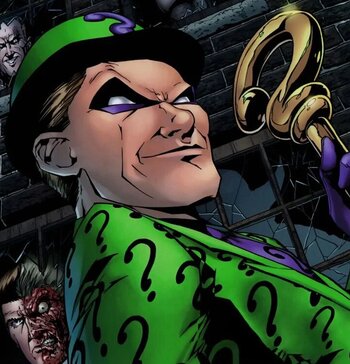 "Riddle me this..."
Click here to see his "Classic" design 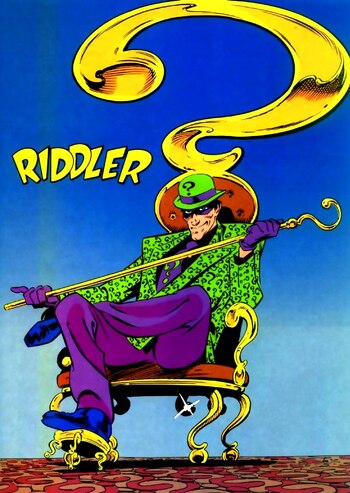 Click here to see his design in The New 52 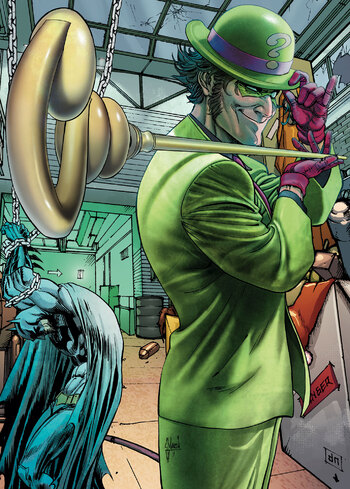 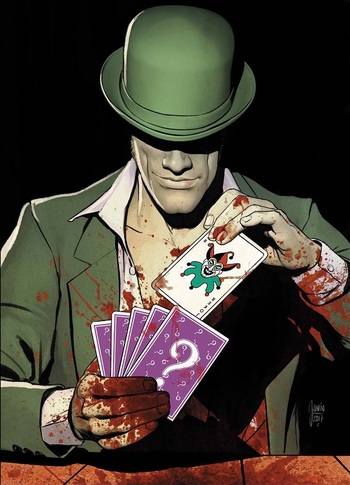 "What fun would that be? The whole point of the game is to outsmart the competition... with the danger that they'll outsmart you!"
— Batman: Run, Riddler, Run

The Riddler (real name Edward Nygma or Edward Nashton, Depending on the Writer) is a supervillain that appears in comic books published by DC Comics, commonly as an adversary of the superhero Batman. Created by writer Bill Finger and artist Dick Sprang, the character first appeared in Detective Comics #140 (October 1948).

Thanks to the unforgettable sixties show (where he essentially replaced The Joker as Batman's lead villain), the Riddler is one of the "big four" classic Bat-Rogues (alongside the Joker, Catwoman and The Penguin). Like most of the Bat-Rogues, the Riddler is victim to a mental disorder - in his case, an obsessive-compulsive disorder that subconsciously forces him to leave clues in the form of riddles at the scenes of his crimes. Flashes into his past have shown an abusive father that would beat him every time he lied and an obsession with riddles, puzzles, and word games, all of which probably didn't help his descent into a criminal life.

The Riddler is best known for his many (often silly) riddles that confound all but the Dynamic Duo, as well as his over-the-top death traps. He is, however, incredibly intelligent, yet considers his battles of wits with Batman to be a game - one in which he heavily respects his opponent.

open/close all folders
Appearances in Other Media

Tropes applying to the Crown Prince of Conundrums: