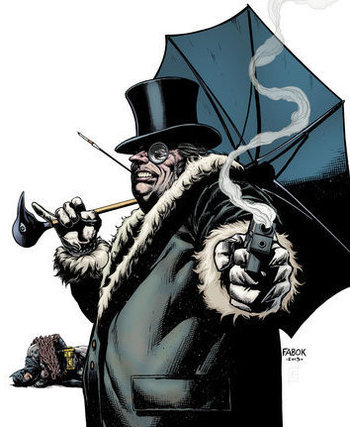 "I AM NOT A HUMAN BEING! I AM AN ANIMAL! COLD-BLOODED!"

"Awkward. Skittish. Friendless. Freakish. I was everything a Cobblepot was not supposed to be. And so, I would have to make my own way in life. There'd be no mayoral reigns or famous war victories for this Cobblepot. No, I would have a life filled with museum thefts and clashes with masked vigilantes to look forward to instead. A life as The Penguin. And so it went. But whatever can be said about my life, even my bitterest foes must grant me this: I've always conducted myself with style. With class. And with dignity. And so it shall remain. No matter what my situation is now."
— Gotham Underground

Oswald Cobblepot was born to wealth and status, much like Bruce Wayne. His father died of pneumonia at a young age. Believing her husband had caught the disease from walking unprotected in the rain, Oswald's mother insisted that her son carry an umbrella at all times. Oswald spent most of his life miserable, being bullied due to his short stature, obesity, and beak-like nose; he was an outcast to all. His only companions were his beloved mother and his pet birds.

Eventually, his frustration built up to a point where he finally decided to release it by becoming a criminal. Due to his upbringing, he always tries to look his best in a tail-coat, top hat, and monocle. In addition to his notable love for birds and the lessons in cruelty he was taught in childhood, all of that inspired him to take the moniker "The Penguin." What began as a malicious childhood nickname has become one of the most feared monikers in Gotham's criminal underworld.

The Penguin is one of Batman's most persistent and implacable foes. Classy, refined, flamboyant, cruel, savage, and ruthless… sometimes all at the same time. A master criminal specializing in committing crimes beneath a facade of legitimacy or weakness, often exploiting people's tendency to underestimate him. The Penguin is motivated by greed and a desire for superiority, his trademarks being birds, his obsession and the imagery he surrounds himself with, and his use of umbrellas, which like himself, conceal deadly weaponry on a benign and comical appearance. Over the years, he gradually moved away from thievery and assault to arms-dealing and operating as a legitimate businessman as a cover-up for his criminal actions, more of a mob kingpin.

Whereas most of the Bat-Villains are insane to a degree, Penguin is usually portrayed as sane and operates the "Iceberg Lounge" nightclub as equal parts legitimate business and front for his OTHER business. Penguin, like Catwoman, skirts the line between being criminal and being on the up-and-up, to the point Batman will even be willing to give him some leeway as long as he doesn't get too dirty. Unlike Catwoman this isn't because he is an Anti-Villain but mostly just a case of Pragmatic Villainy. Batman's even used him as an information source on underworld info since the Penguin knows "everybody". They're enemies, but they're willing to let each other be as long as their paths don't cross.

The character is one of the most prominently featured Batman villains, having appearances in virtually every Batman-related media, his most iconic depictions being in the 1960s Batman (1966) television series, portrayed by Burgess Meredith, and in the 1992 film Batman Returns, where he was portrayed by Danny Devito. He's also appeared in 2022's The Batman, played by an unrecognizable Colin Farrell. Robin Lord Taylor portrays a younger version of Oswald Cobblepot in the television show Gotham. Tom Kenny has voiced him several times. Paul Williams voiced the character in Batman: The Animated Series. He is currently voiced by Dana Snyder in Justice League Action.

The Penguin provides examples of: