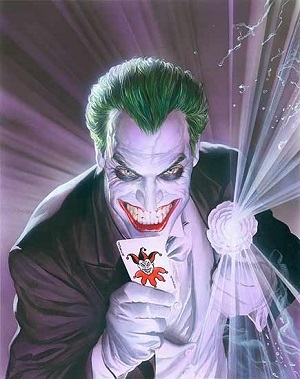 The Joker by Alex Ross

"If the police expect to play against the Joker, they had best be prepared to be dealt from the bottom of the deck."
— Batman #1, his first appearance, written by Bill Finger.

The Clown Prince of Crime. The Harlequin of Hate. The Ace of Knaves. The Jester of Genocide. The Mountebank of Mirth.

The Joker is a comic book supervillain owned by DC Comics, who primarily appears as a member of Batman's Rogues Gallery. He first appeared in Batman #1 (25 April, 1940). He was created by Bob Kane, Bill Finger and Jerry Robinson. Credit for the Joker's creation is disputed; Kane and Robinson claimed responsibility for the Joker's design, but acknowledged Finger's writing contribution. Comics scholars lean to Robinson and Finger as Joker's true creators owing to Kane's well documented history of swiping and hiring ghost-artists for his work. Originally he was to die at the end of his second appearance, but the comic's editor wouldn't allow it feeling it was a waste of a perfectly good villain. In his early days he was portrayed as a cunning criminal with a constant grin and an occasional sadistic streak, became a goofy prankster in the The Silver Age of Comic Books, and then in the 1970s evolved into the terrifying mixture of whimsy and malice that he's best known as today.

The most famous origin stories for the Joker are The Man Behind the Red Hood by Bill Finger and The Killing Joke by Alan Moore. In the former, the Joker was an infamous thief known as "the Red Hood" who, while robbing a chemical plant, was accidentally knocked into a vat of chemicals by Batman, giving him white skin, green hair, and a permanent smile. The origin put forth in The Killing Joke is fairly similar, with the main change being that the Joker was actually a harmless failed comedian that was blackmailed into donning the Red Hood and committing the robbery. The accident at the chemical plant happened the same day as his pregnant wife died, and the trauma of this "one bad day" drove the Joker completely mad.

Despite the popularity of these origins, DC's official stance is that no version of the Joker's origin is true. The Joker is the Trope Namer for Multiple-Choice Past, after all, and he's openly and brazenly lied about his origins to others many times. All that is definitively agreed upon by most writers and fans is that, in some way, Batman played a prominent role in the Joker's creation. But as far as most are concerned, he doesn't need an origin beyond that, because the dynamic he has with Batman speaks for itself — the two of them are perfect Foils. Batman is a stern and serious vigilante crimefighter, while the Joker is a zany and manic killer clown. ​Batman represents order and the Joker represents chaos. Batman is an Anti-Nihilist and the Joker is a Straw Nihilist. Batman is motivated by grief and love over the murder of his parents and has a patrician ancestry dating back centuriesnote with some versions stating that he is related to 'Mad Anthony' Wayne

, an American brigadier general during The American Revolution, but the Joker loves no one but himself and has no past whatsoever— he simply is.

While the Joker enjoys spreading death and chaos wherever he can, he has a particular interest in tormenting Batman. The Joker is widely considered Batman's Arch-Enemy, and virtually every major Batman adaptation depicts him as one of the Dark Knight's most persistent and dangerous foes. The exact reason for his obsession with Batman varies Depending on the Writer: as revenge for the chemical plant accident, for philosophical and moral reasons to prove a point, because the Joker considers Batman his perfect Straight Man to play off of, because the Joker is infatuated with him and wants his attention, or just because he gets more joy from troubling Batman than he does others. Some of his most heinous crimes against Batman and those close to him include the murder of Jason Todd (the second Robin and Batman's ward), the murder of Jim Gordon's wife Sarah Essen, and the paralysis of Batgirl, Barbara Gordon. His obsession with Batman is so deep and profound that he doesn't care who Batman really is and makes no attempt to find out. For him, it's all about Batman.

The Joker has no true superpowers, save for an acquired immunity to poisons due to the chemical accident and prolonged exposure to the chemicals he works with for his plans. He may also have a unique mental condition that causes him to invent a new personality for himself every so often, making him even more unpredictable. His true powers lie in his cunning and intelligence. The Joker is a Manipulative Bastard able to trick his enemies into playing right into his hands, and he can pull off impressive long-term schemes that may fool even Batman. He's a brilliant chemist and prominently uses poison and chemical agents in his schemes, and has lesser skill with technology in general, able to build complex contraptions and death traps. Like Batman, the Joker keeps his personal arsenal "on-brand" — exploding cigars that can level buildings, squirting flowers that shoot acid, razor-sharp throwing cards, a "Bang!" Flag Gun that fires the flag as a projectile, and a joy buzzer that delivers a deadly electrical shock. His most well-known weapon is his customized Joker Venom, which kills its victims and leaves the corpse with a wide smile like the Joker's.note Depending on the Writer, it may also bleach their skin white, turn their lips bright red, and/or send them into uncontrollable laughter as they succumb.

Despite his lack of powers, the Joker is one of the most dangerous and feared villains in the DC universe, because he is just so depraved, insane, and chaotic, that he is capable of things even other supervillains wouldn't do. The Joker's unpredictable nature means most other supervillains refuse to work with him because they feel they can't trust him and he'll betray them or pursue his own agenda, and inevitably he proves them right. The flip side to that is if you get a group of villains together for a scheme and don't include the Joker, he's pissed off at you excluding him and he'll start messing up your plans anyway. While the Joker has joined groups like the Injustice Gang and Injustice League, it never lasts, either the Joker turns on them or they turn on him when they tire of his antics. Batman: The Animated Series introduced Harley Quinn, the Joker's former psychiatrist who fell in love with him and is now his on-and-off sidekick and girlfriend. Because of her blind devotion and love for him, Quinn is about the one long-term relationship Joker can sustain because she sticks by him in spite of how horribly he treats her. This has loosened in later years as she realizes the Joker is a domestic abuser who doesn't return her affections, but to what extent she abandons him and if Joker is able to sway her back to him varies Depending on the Writer.

The Joker has been the subject of several self-titled solo books:

The Criminal version of the Joker takes on the traits he used during the Joker's Golden Age appearances where he was a No-Nonsense Nemesis to Batman and had no problems with Why Don't You Just Shoot Him? in response to the Caped Crusader. Of the three he is the most organized and philosophical believing that there must be some meaning to the Joker as Batman's archenemy.
The Clown

The Clown is the showman of the group and the one responsible for the zany props, elaborate crimes with locales like a giant props factory, and makes sure his crime sprees follow a theme. He is physically modeled after the Silver Age Joker who was more of a harmless prankster, though the Clown is anything but harmless. After all, he is strongly implied to be the same Joker who bludgeoned Jason Todd and killed him in an explosion.
The Comedian

The Comedian is the sadist of the group and the one most bitter and hateful towards everyone and everything. Modeled after the Bronze Age Joker as defined by The Killing Joke, he's the most violent and psychotic, believing only in chaos.