See here for more info about him. 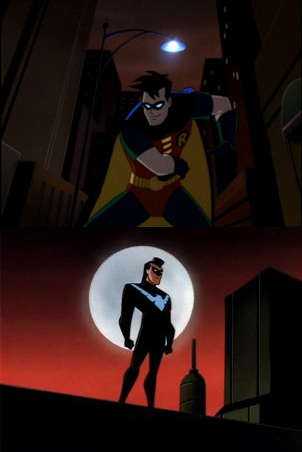 Voiced by: Loren Lester
Appearances: Batman: The Animated Series | The New Batman Adventures | Justice League Unlimited | Batman and Harley Quinn
"Hey, no one can be a Boy Wonder forever."

Just like his comic book counterpart, Dick was a member of The Flying Graysons, a family of circus acrobats. His parents were killed by a mobster named Tony Zucco. After being taken in by Bruce Wayne, he eventually finds out his secret and takes up the role of Robin. Eventually, he grows up and strikes out on his own, taking a new name: Nightwing. 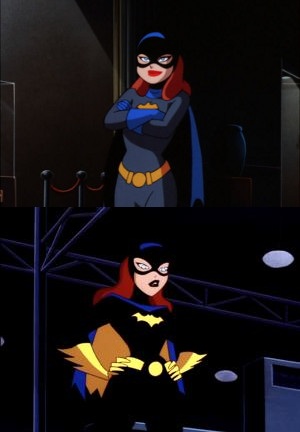 The daughter of Police Commissioner Gordon, Barbara first takes up the Bat cowl when her father is framed for corruption by Corrupt Cop Gil Mason. She plans to attend a "Gordon is innocent" rally while impersonating Batman, believing that the appearance of the Caped Crusader will drum up support for her father. When she gets involved in a drive-by shooting that hits the rally, she is partially unmasked by Robin when he rips the back of her cowl, freeing her hair and leaving the city wondering "Who is Batgirl?"

Barbara operates independently during her appearances in Batman: The Animated Series, but she is officially inducted into the Bat-Family by the time of The New Batman Adventures. She serves as Batman's main partner throughout the series, replacing Dick Grayson, while the new Robin (Tim Drake) is more of a once in a while helper.

By the time of Batman Beyond, Barbara has become older and put aside the cowl and picked up the badge, taking her father's place as Police Commissioner of Gotham City. As fate would have it, the long-retired Bruce Wayne has just taken on a protege as the new Batman. See here for tropes applying to her in that show. 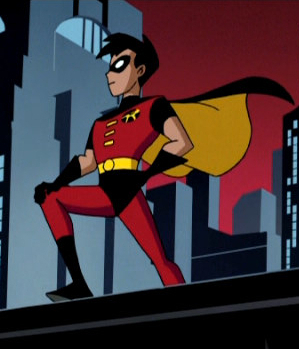 This Tim Drake is a combination of both the comic version and Jason Todd, the Robin before him. The son of a two-bit crook who betrayed and was murdered by Two-Face, Robin falls into Batman's world while fleeing Two-Face's thugs who are chasing him over something left by his father. Like Grayson, Tim finds out Batman's identity, steals the Robin costume, and ultimately helps bring Two-Face down. 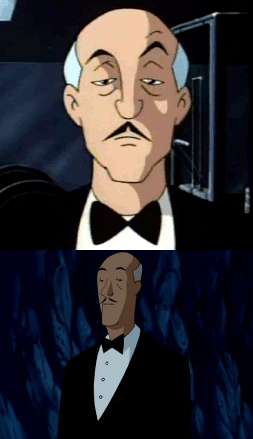 The Wayne family's old butler, who is fiercely loyal towards Bruce, whom he sees as a surrogate son, especially since raised him after his parents' deaths. Alfred keeps a Stiff Upper Lip, even under the extraordinary circumstances imposed by his master's secret identity, though he can't help but make the occasional sarcastic quip about Bruce's unusual hobby.

Despite his unthreatening and quiet appearance, Alfred is also a former agent of the British Secret Service and has more than once proved he is quite capable of holding his own in fights.

He is also one of the only people who can give Batman orders and not be ignored.