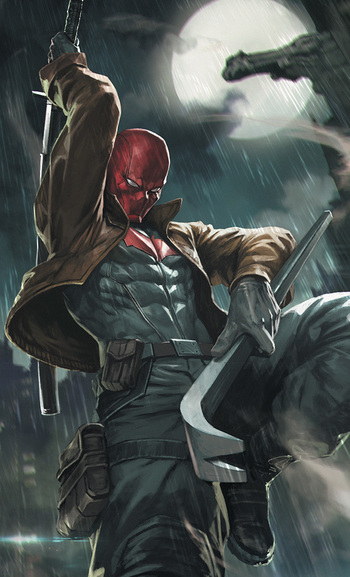 "Hey, it's going to be hard to learn a great many things about me, but one I'll give you for free...I am no one's son."
Created by: Gerry Conway · Don Newton
First Appearance: 1983, Batman #357
Appearances:
Post-Crisis: Batman | Batman and Robin (2009) | Red Hood: The Lost Days | Batman (Grant Morrison) | Nightwing | Red Robin | Teen Titans | Action Comics | The All New Atom | Batgirl (2009) | Deadman: Dead Again | Green Arrow | Outsiders | 52
For the Man Who Has Everything | A Death in the Family | A Lonely Place of Dying (flashbacks) | Batman: Hush | Red Hood: The Lost Days | Countdown to Final Crisis | Convergence
New 52: Red Hood and the Outlaws | Night of the Owls | Teen Titans | Grayson
DC You: Red Hood/Arsenal | Batman and Robin Eternal
DC Rebirth: Red Hood and the Outlaws Rebirth | Nightwing (Rebirth)
DC Infinite Frontier: Task Force Z | Nightwing (Infinite Frontier)
Advertisement:
"I don't wanna learn to be no crook. I just boost what it takes to survive."

Red Hood is the codename of Jason Peter Todd, the second Robin, succeeding Dick Grayson as Batman's sidekick. He was initially little more than a Suspiciously Similar Substitute of Dick, down to the circus orphan background, who came in to replace Dick around the time the latter became Nightwing.

Then Crisis on Infinite Earths happened.

To distinguish him from Dick more strongly, Jason was then retconned as a troubled Street Urchin who first met Batman when the latter caught him stealing the Batmobile's tires (and thought it was Actually Pretty Funny). While he had his fans, the revamped Jason ultimately proved unpopular with readers, primarily due to the fact that he simply wasn't Dick Grayson, with added fuel resulting from an event that left it ambiguous about whether or not he had killed someone. In Jason Todd's most famous (and controversial) story, readers were given the opportunity to vote by phone to decide whether or not he would survive an event called A Death in the Family. You can probably guess how that turned out. Readers phoned in and, unfortunately, Jason Todd would meet his demise at the hands of none other than The Joker in what is still one of DC Comics' most controversial storylines.

For years Jason's death served as Batman's greatest failure. His uniform was hung in the Batcave in memoriam and served as a black spot on the Caped Crusader's crime-fighting crusade for years to come. Readers were introduced to Jason's successor in Batman #436, Tim Drake, who mostly felt the consequence of Jason's death through Batman's more careful approach and reluctance in taking him on as a partner. But for a long time, Jason Todd was one of the sole exceptions to the Death Is Cheap trope that notoriously plagues superhero comic books.

Superboy-Prime punching the walls of reality caused "ripples" to affect the time-stream, righting wrongs and undoing various retcons and events across the larger DCU. Jason Todd awakened in his grave and clawed himself out a changed man. Recovered by Talia al Ghul and given extensive training in assassination and gunplay, Jason adopted the name Red Hood, an alias that once belonged to the man who killed him, and went on a one-man crusade against crime in Gotham City. During this, he also challenged the Dark Knight himself, whose Thou Shalt Not Kill code he sees as foolish and useless, while also seeking answers for why his former mentor never avenged him.

With the company-wide New 52 relaunch in 2011, Jason returned in a less antagonistic role within the Batfamily, serving as more of a bad boy anti-hero. He also partnered with Arsenal and Starfire to form the Outlaws. Following the dissolution of that group, he worked as a mercenary alongside Arsenal in the aptly titled Red Hood/Arsenal. Following the DC Rebirth event, Jason formed a new group of Outlaws starring Bizarro and Artemis.

Not to be confused with the original alias of The Joker before he fell into a vat of chemicals, or that story about the girl who visits her grandmother in the woods.