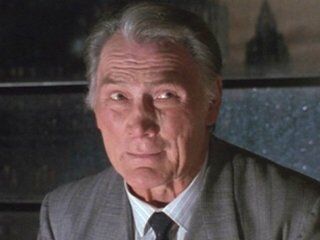 "My friend, your luck is about to change."

"Jack....smart thinking. That's the way to go. In fact...I'd like you to handle this operation personally."

An infamous Gotham mob boss and Jack Napier's employer. Grissom has Napier set up due to having an affair with his mistress Alicia; this backfires on him when Napier survives the confrontation at Axis Chemicals and kills Grissom in revenge, proceeding to take over his operation. 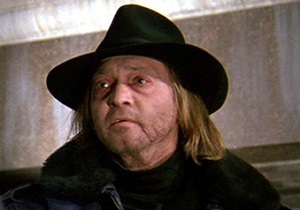 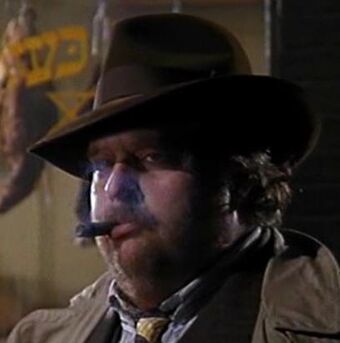 "Where you been spendin' your nights?"

"I answer to Grissom, not to psychos!"

A dirty cop, part of the GCPD. Although a partner of Commissioner Gordon, he is also working for crime lord Carl Grissom. 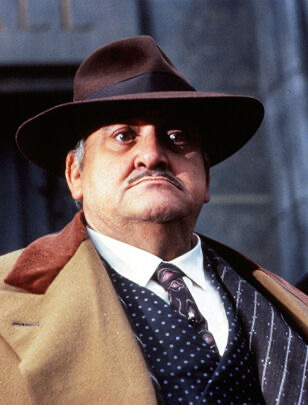 A Gotham mob boss who seeks to usurp Joker's place as Grissom's successor. 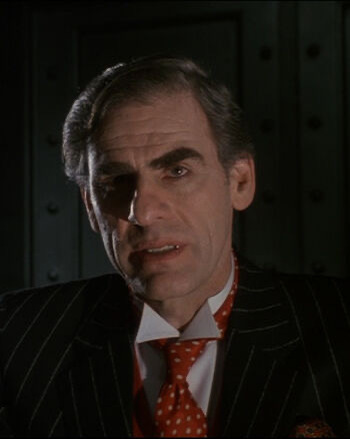 "And what's with that stupid grin?" 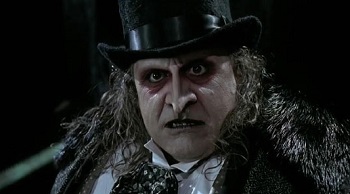 "My name is not Oswald! It's Penguin! I am not a human being. I am an animal! Cold-blooded!"

"True. I was their number one son, and they treated me like number two."

The son of wealthy Gotham citizens who dumped him in the sewer due to his deformity, he was taken in by the Red Triangle Gang, eventually becoming their leader. Wanting to find out about his family, Oswald blackmails Max Shreck into helping him and he eventually becomes Gotham City's new darling, even running for Mayor. That is, until his true nature and intentions are exposed by Batman. 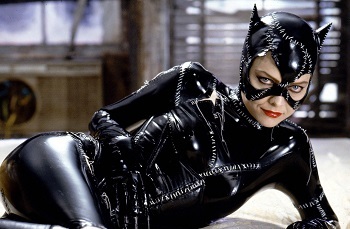 "I am Catwoman. Hear me roar!"

"I don't know about you, Miss Kitty, but I feel so much yummier."

Max Shreck's secretary, Selina Kyle finds out her boss' plans to take energy from Gotham citizens and is pushed out a window in an attempt to kill her. She survives, but suffers a psychotic breakdown that results in her becoming Catwoman. 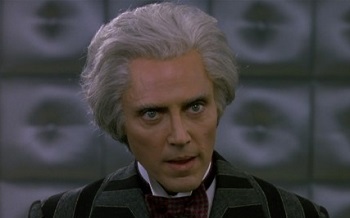 "I am the light of the city, and I am its mean, twisted soul. Does it matter who's Mayor?"

A powerful and respected businessman, Shreck seeks to siphon power from Gotham's citizens and joins forces with the Penguin to do so. 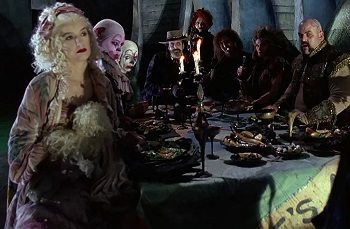 "You want my old friends up there to drive the mayor into a foaming frenzy!" 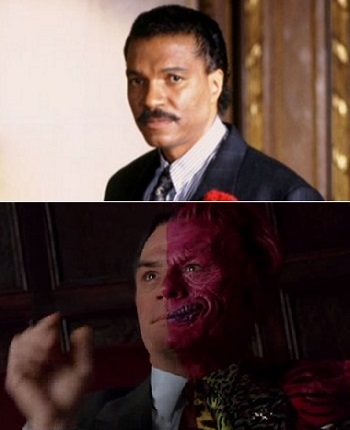 "Yes, of course you're right, Bruce. Emotions are always the enemy of true justice... thank you... you've always been a good friend."

"One man is born a hero, his brother a coward. Babies starve, politicians grow fat. Holy men are martyred, and junkies grow legion. Why? Why, why, why, why, why? Luck! Blind, stupid, simple, doo-dah, clueless luck!"

Gotham's former District Attorney. In the first movie, he fights to bring down the Gotham underworld headed by Carl Grissom. In Batman Forever, however, he has become Two-Face as a result of being attacked by a mobster and developing a Split Personality. He blames Batman for what happened to him and seeks to destroy him. 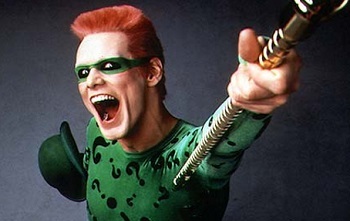 "Riddle me this, riddle me that... who's afraid of the big, black bat?"

"Soon my little Box will be on countless TVs around the world. Feeding me... credit card numbers, bank codes, sexual fantasies, and little white lies. Into my head they'll go. Victory is inevitable!"

A Bruce Wayne fanboy working at Wayne Enterprises, Edward Nygma was turned down by Wayne himself over the idea of mental experimentation. After being fired by his supervisor (and sending him to Destination Defenestration), Nygma was inspired by Two-Face's spree at the circus and decided to create a supervillain identity of his own. Utilizing his tech to team up with Two-Face and steal money to mass-produce his "Box," Nygma becomes the Riddler, draining the intelligence of Gotham's Box-owning citizens to add to his own already formidable intellect. All to get back at Bruce Wayne. 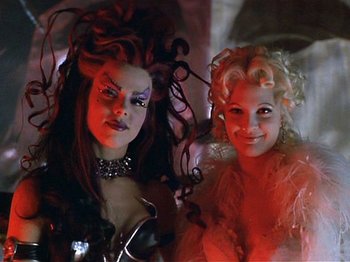 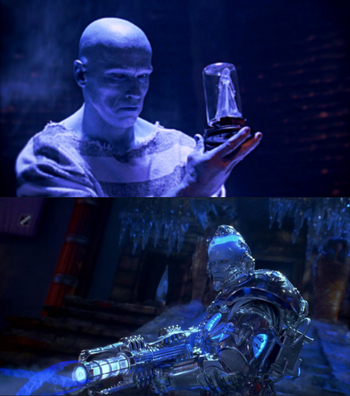 "Prepare for a bitter harvest. Winter has come at last."

"Allow me to break the ice. My name is Freeze. Learn it well... for it is the chilling sound of your doom."

Victor Fries was a two-time Olympic decathlete and a brilliant scientist whose wife, Nora, was stricken with an incurable disease, leading him to cryogenically freeze her until he could find a cure. Sadly, a lab accident altered Victor's physiology and turned him into a cold-blooded organism that could not survive in above-freezing temperatures, forcing him to turn to a life of crime. Building both a suit that allows him to move in warm environments and a gun that fires freezing rays, Victor now calls himself Mr. Freeze and is stealing diamonds from all over Gotham to power a device that will freeze the city, planning to hold Gotham for ransom and demand enough money to complete his research and cure Nora. 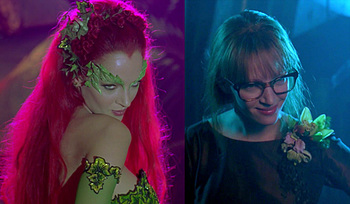 "Oh, and Jason—one other thing. I probably should have mentioned this earlier: I'm... poison."
Click here to see Poison Ivy's second costume 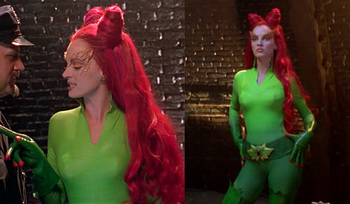 "I really am to die for...!"
Click here to see Poison Ivy's final costume 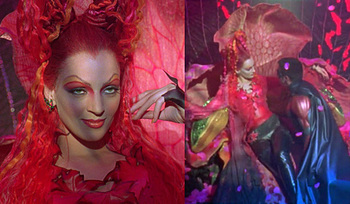 "It took God seven days to create paradise. Let's see if I can do better."

A botanist working in a South American lab under the employ of Wayne Enterprises, Dr. Pamela Isley is seemingly murdered in a Freak Lab Accident when she stumbles upon her eccentric colleague's secret experiments, rebuffs his sexual advances, and threatens to ruin his career. However, after prolonged exposure to the Super Serum known as Venom, she becomes a full-on murderous vamp with a pheromone dust concoction and poisonous lips who seeks to pit Batman and Robin against each other and rid the earth of mankind's toxic influence. 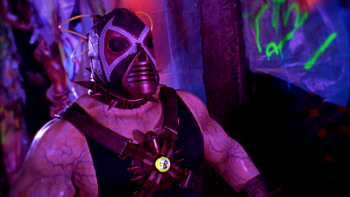 "I'm a lover, not a fighter; that's why every Poison Ivy action figure comes complete WITH HIM!"

After a series of ruthless experiments conducted by Dr. Jason Woodrue, South American serial killer Antonio Diego is transformed into the monstrous, mindless, hulking brute known as Bane. Played by late wrestler Jeep Swenson, this iteration of Bane is an In Name Only version of the character, serving as a monosyllabic Giant Mook for Poison Ivy. 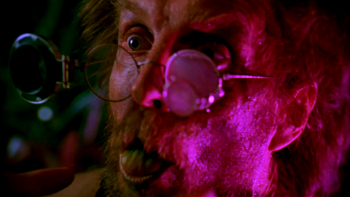 "Join me: the two of us entwined, side by side."