This is a partial character sheet for BanG Dream!. Visit here for the main character index. Subjective trope and audience reactions should go on the YMMV page.

A band formed by five childhood friends as a way to always stay together, their powerful bond comes through in their music. They consist of Ran on lead vocals and rhythm guitar, Moca on lead guitar, Himari on bass, Tomoe on drums and Tsugumi on keyboard. Their songs have a rebellious and emotional alt-rock style. 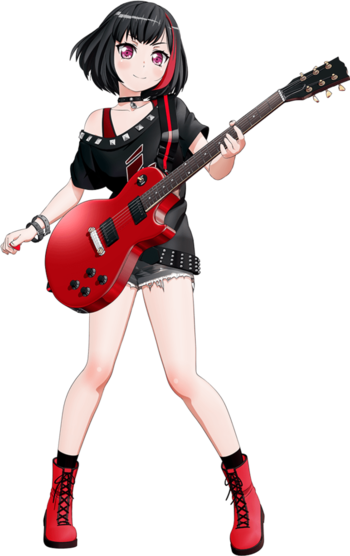 Rebellious Red Noodle
Birthday: April 10 (Aries)
School: Haneoka Girls' High School
Year: 1st (Season 1), 2nd (Season 2)
The lead vocalist and rhythm guitarist of Afterglow. Aloof and serious on the outside, she often struggles to express her true feelings. However, she holds a deep love for her friends and family as well as a fiery passion for her band. Her being placed in a different class from the rest of her friends in middle school, and her resulting loneliness, was what ultimately led to the creation of Afterglow. Her family runs a century-old flower arranging school, and Ran's love for her band places her into conflict with her father.
Moca Aoba 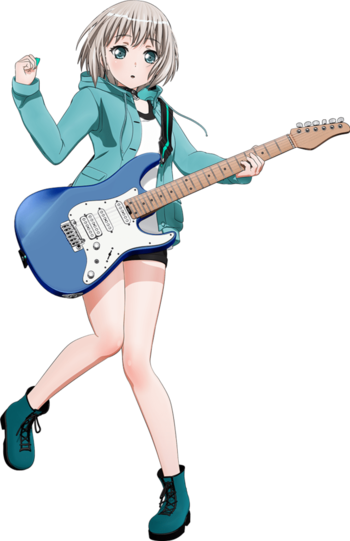 Go My Way
Birthday: September 3 (Virgo)
School: Haneoka Girls' High School
Year: 1st (Season 1), 2nd (Season 2)
The lead guitarist of Afterglow. An unflappable, sleepy-natured girl who seems to take life at her own pace, she often says exactly what's on her mind, whatever it may be. The members of Afterglow share a strong bond, but Moca's friendship with Ran is especially powerful, and she is the best at handling their aloof vocalist. Despite her easygoing and sly personality she can often be transparent with her worries. 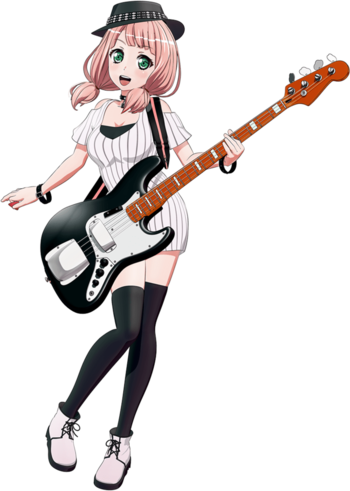 Misfires Commands
Birthday: October 23 (Scorpio)
School: Haneoka Girls' High School
Year: 1st (Season 1), 2nd (Season 2)
The bassist and leader of Afterglow. A cheerful, ditzy girl who gets easily emotional. Wants to be cool like her bandmates, but seems more suited toward being cute. Although she's the band's coordinator, her suggestions often get her teased (with love) by her fellow members.
Tomoe Udagawa

Ramen Broth Caring Sister
Birthday: April 15 (Aries)
School: Haneoka Girls' High School
Year: 1st (Season 1), 2nd (Season 2)
The drummer of Afterglow. A reliable and mature girl who often works hard for the sake of others, she serves as the emotional bedrock of her band. She is often seen helping out around the shopping district and plays the taiko drums in the town festivals. She is the older sister of Ako, the drummer for Roselia, and is loving and supportive of her younger sister, if a bit bemused by her antics.
Tsugumi Hazawa 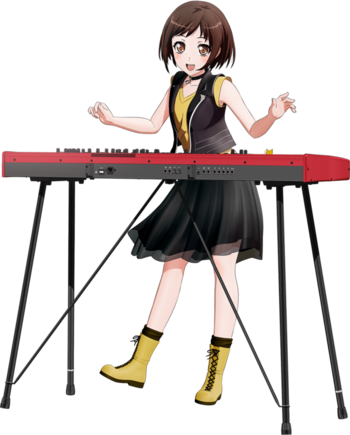 Great Ordinary
Birthday: January 7 (Capricorn)
School: Haneoka Girls' High School
Year: 1st (Season 1), 2nd (Season 2)
The keyboardist of Afterglow. An earnest, hardworking girl, it was originally her idea for her and her friends to form a band. She doesn't view herself as unique or talented like her bandmates so she strives to make up for it with hard work, and despite her dim view of her own talent her optimism helps to keep the band afloat in tough times. Her family owns a cafe.