The Hanma Family
The Hanma family (Baki, Yujiro, Jack and Yuichiro) have their own page here.
Advertisement:
Gouki Shibukawa 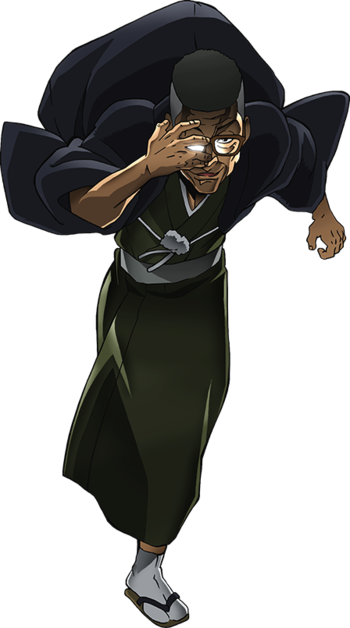 An elderly Jujutsu master who Baki encounters in the Maximum Tournament. A World War 2 veteran with a penchant for mischief and a consumate traditionalist, Gouki prefers to confound his opponents into attacking first, so he can take advantage of their lack of respect.
Kaoru Hanayama 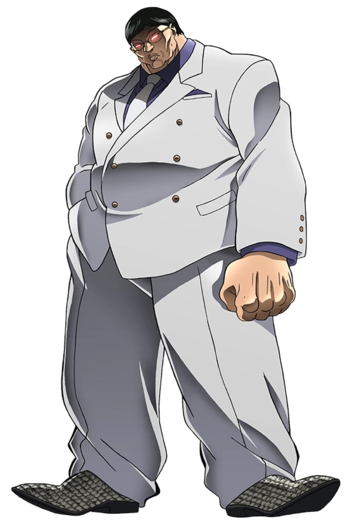 Hanayama is considered the toughest Yakuza in Japan; a silent, stoic type who is famed for never being felled by a single strike.
Doppo Orochi
See him here.
Retsu Kaioh 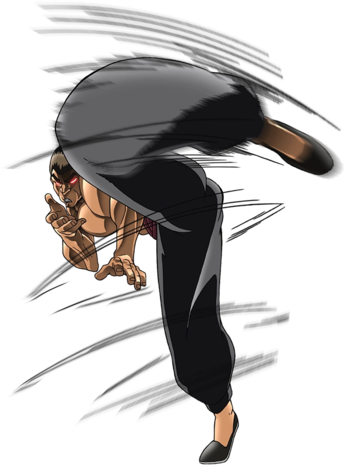 A Kenpo practitioner from China, seemingly born for the task of being the greatest Kung-fu master of the modern era. He is proud and composed, but in combat becomes a flurry of masterful technique. So impressive is his martial arts skill that he's gained quite an arrogant streak around it. But underneath, he's not really that bad of a guy.
Motobe Izou
A stocky, gloomy fellow who is also a Jujutsu master, specifically in the use of traditional japanese weaponry. Physically the weakest of Baki's friends, he overcomes this primarily through ingenious strategy and skill. And of course, when there are no rules regarding weapons, there are few alive who can match his skill with a blade.
Advertisement:
Mitsunari Tokugawa 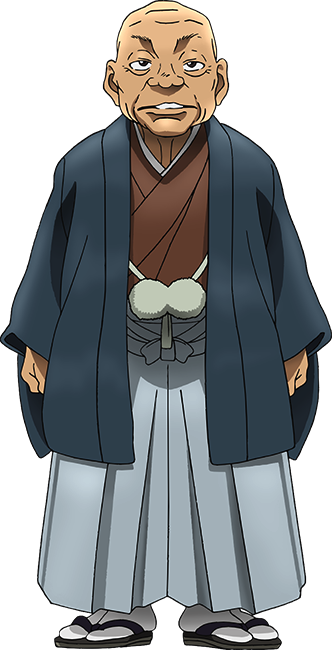 The 13th head of the Tokugawa clan, and the owner of the Underground arena. While he himself isn't a fighter, he's extremely knowledgeable on martial arts, and has the money to create many of the tournaments seen throughout the series.
Kozue Matsumoto

Baki's girlfriend. A quiet and shy girl, she has no combat experience or training, but she will support her boyfriend no matter what, even if she's come to hate the world he now lives in. 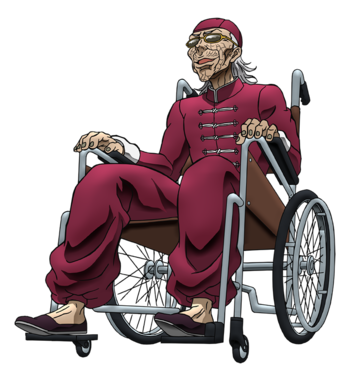 The Kaioh of Kaiohs and the supreme grandmaster of Chinese Kenpo who, even at his highly advanced age, is widely considered one of, if not the best martial artist there ever was.
Advertisement:
Muhammad Ali Jr. 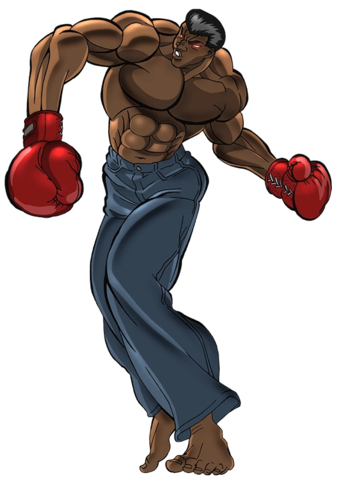 The sole son of the famed Muhammad Ali, Ali Jr. is an arrogant American boxer who claims to be the world's best.
Biscuit "Unchained" Oliva 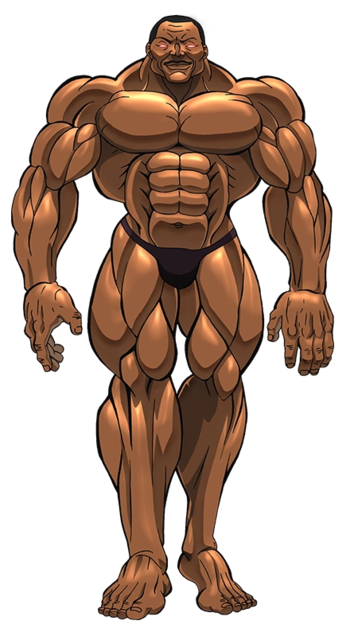 A Cuban-American mercenary who made his fortune killing threats deemed too dangerous for anyone else to deal with. He runs a prison in Arizona in which he is officially a prisoner, but also the warden.
Pickle the Caveman
A man found perfectly preserved in a saline rock formation in a deeply underground mining facility at the border of Colorado and New Mexico, Pickle is an evolutionary anomaly, set free after 190 million of years of stasis by Albert Payne and his team of experts.
Miyamoto Musashi 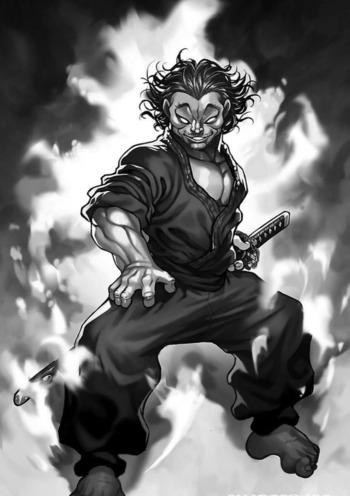 A biological clone of the swordsman who brought low sixty men in a duel, Musashi was reborn to see how he'd stack up to the best fighters of modern times through an altogether irresponsible scientific experiment Tokugawa funded to bring the "Strongest under the Heavens" from 1584-1645 back into the modern day.
Nomi no Sukune II
The 272th power descendant of the legendary Sumo Wrestler, Nomi no Sukune II is a simple Buddhist monk who joins underground fighting and makes an instant impact.
Taima no Kehaya II
The 101st power descendant of the legendary Sumo Wrestler from antequity, so renowned for the speed of his kicks that he took "One who kicks fast" as his last name, eventually falling in battle during the first Kakukiri bout at the hands of Nomi no Sukune. This descendant of his recently tested his mettle by breaking the Killing Stone

In General
A quintet of the most dangerous convicts in the world, all sentenced to death in the countries they were caught in. Suddenly and collectively driven by a desire to "taste defeat", they converge on the Underground Arena to face Baki, who they all believe to be the strongest fighter in the world after hearing of his achievements at the Maximum Tournament.
Dorian Kaioh
Voiced by: Banjo Ginga (JP, Netflix ONA), Aaron LaPlante (EN, Netflix ONA), Santos Alberto (LatAm, Netflix ONA) 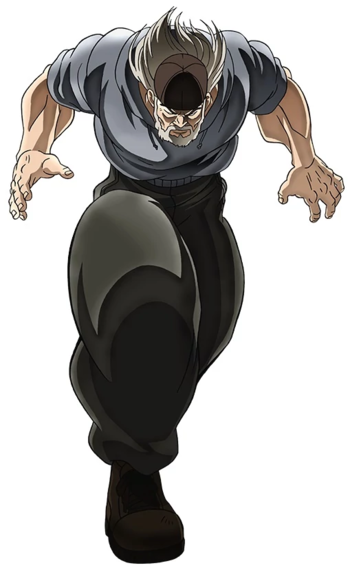 An American army veteran who once served in the Occupation era post World War 2 Japan, Dorian embodies the combined lethality of the cunningness of a street brawler with the discipline of a master martial artist. And a former Kaioh who was the first modern-day Westerner to gain the title. 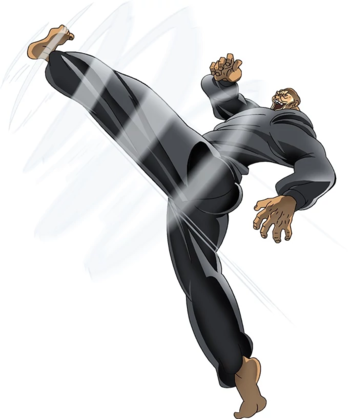 A serial killer with a cruel sense of humor, underneath Speck's humorous attitude and gleeful smile belies an unrepentant psychopath who revels in bloodshed and violence without remorse. 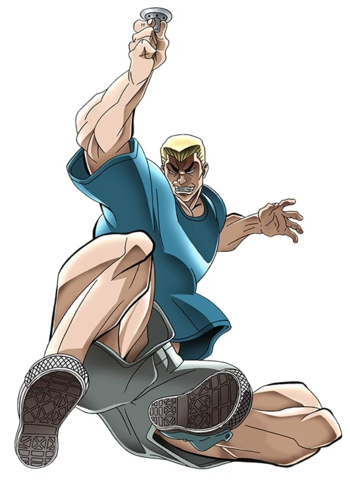 A Russian criminal and an arrogant pragmatist whose power lies in his immense hand strength and athleticism, Sikorsky can rend flesh with his knuckles as well as scaling on flat surfaces with almost inhuman grace. 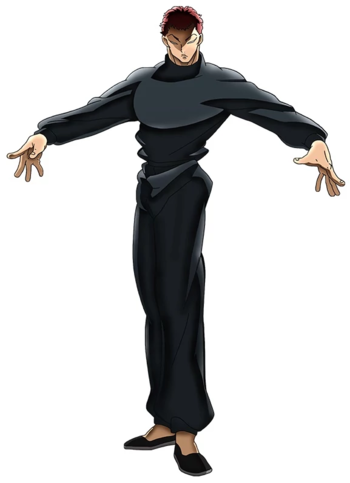 A British assassin who has modified his body into a walking array of hidden weapons and gadgets. 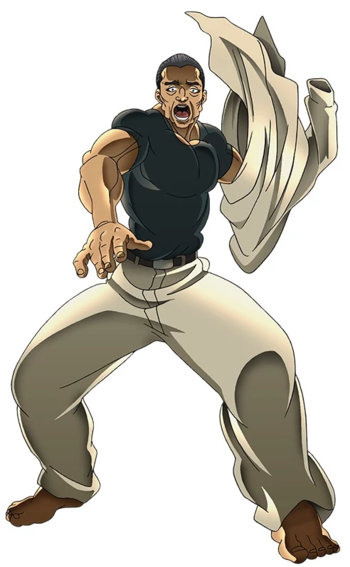 A martial artist of The Way of the Void whose mastery allows him to create vacuums with his bare hands, as well as inflicting deadly poison with a mere touch.

Genichi Fukamachi
The Boxing coach at the Boxing gym Retsu goes at. He become Retsu's personal Boxing coach after the man shows his stuff by exploding a heavy bag in a single blow.
Mani Akio
A super welterweight champion of Boxing who decided to give a little visit to Retsu's boxing gym.
Kaiser
The famous boxing promoter of America, who is stunned by Retsu punching a hole clean through a worn old boxing glove and sells him on getting into professional boxing by telling Retsu he's stirring a den of monsters, setting up several fights for him in Las Vegas.
Andrei Valev
One of the boxers fought by Retsu.
"Smoking" Joe Crazier
One of the boxers fought by Retsu. Based on a legendary heavyweight from the Golden Age of Boxing, his nickname comes from the fact that most of his opponents can't even lay a hand on him, as if they were fighting smoke.
Wilbur Bolt