This is a listing for characters associated with the Earth Alliance that appear in the Science Fiction series Babylon 5. Visit here for the main character index. 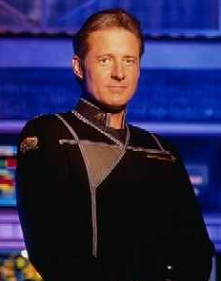 For justice, for peace, for the future... we have come home!
Played by: Bruce Boxleitner
Jeffrey David Sinclair 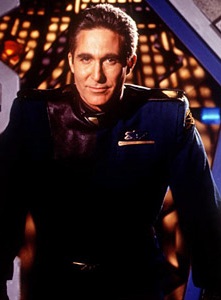 Whether it happens in a hundred years or a thousand years or a million years, eventually our Sun will grow cold and go out. When that happens, it won't just take us. It'll take Marilyn Monroe, and Lao-Tzu, and Einstein, and Morobuto, and Buddy Holly, and Aristophanes... All of this... All of this... Was for nothing. Unless we go to the stars.
Played by: Michael O'Hare
Susan Ivanova 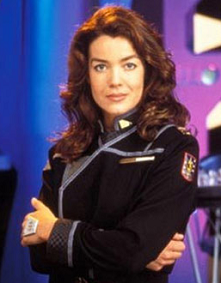 Ivanova is always right. I will listen to Ivanova. I will not ignore Ivanova's recommendations. Ivanova is God. And if this ever happens again, Ivanova will personally rip your lungs out!
Played by: Claudia Christian
Michael Garibaldi 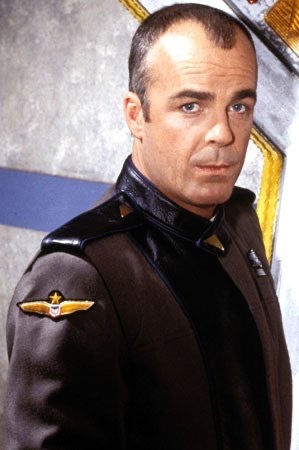 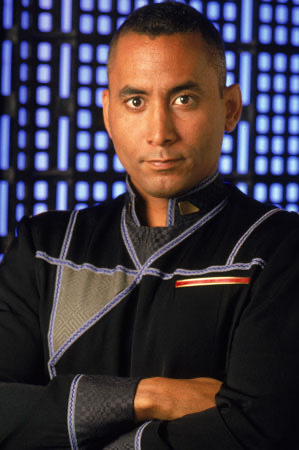 People come to doctors because they want us to be gods. They want us to make it better - or make it not so. They want to be healed and they come to me when their prayers aren't enough. Well, if I have to take the responsibility, then I claim the authority too.
Played by: Richard Biggs 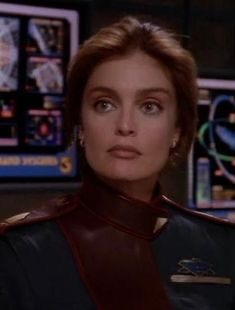 My first CO once told me: "When someone asks you why you took on a job, the worst answer you can give is 'Because a friend asked me to.'" I should have listened. This place is one long exercise in frustration.
Played by: Tracy Scoggins
Zack Allen 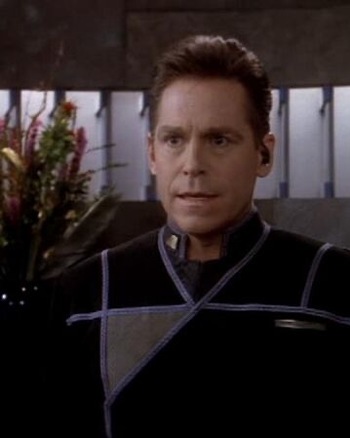 Played by: Jeff Conaway
Warren Keffer
It was jet black, a shade of black so deep your eye just kind of slides off it. And it shimmered when you looked at it. A spider, big as death and twice as ugly. And when it flies past, it's like you hear a scream in your mind.
Played by: Robert Rusler
David Corwin
"Okay, activate defense grid. Launch all Starfuries, and if they move, shoot 'em. If they don't move, shoot twice; they're probably hiding something."
Played by: Joshua Cox
President William Morgan Clark 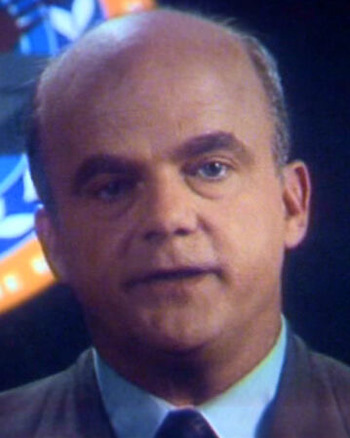 The Vice President of the Earth Alliance at the start of the series, he takes over after President Luis Santiago dies in the explosion of EarthForce One in the season one finale. He soon begins curtailing civil rights and instituting progressively more fascist and anti-alien policies, culminating in season three's double Wham Episode "Point of No Return" and "Severed Dreams" with a declaration of martial law, ordering the Senate's dissolution, and the bombardment of civilian targets on Mars. This prompts Sheridan to declare Babylon 5's independence from Earth Alliance.

President Susanna Luchenko
"Well, Captain, you've caused quite a stir. Half of Earth Force wants to give you a kiss on the cheek and the Medal of Honour. The other half wants you taken out and shot. As a politician you learn how to compromise, which by all rights means I should give you the Medal of Honour, then have you shot."
Played by: Beata Pozniak

An Earth Alliance senator for the Russian Consortium, she is named acting president of Earth Alliance after Clark shoots himself, and remains in the job through season five and into Crusade's timeframe. 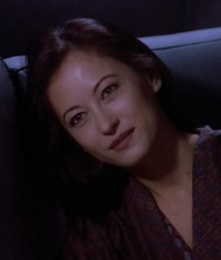 The dance goes something like this. We meet, renew acquaintances, talk about old times at the Academy, you ask about my aunt, I ask about your brother, we lie about not missing each other, and then we end up in bed together.
Played by: Julia Nickson
General William Hague

A high-ranking Earthforce officer who leads the rebellion against President Clark.