Organization as a Whole 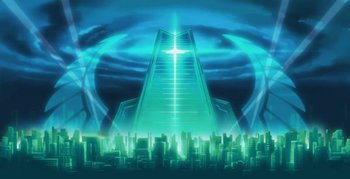 A powerful conglomerate composed mostly of power companies, the Sumeragi Group is the sole supplier of the nation's energy needs and is also involved in media, space development, and military technology. They wield extraordinary influence in politics; it is not an exaggeration to say that they are the de facto power in this country. The Sumeragi Group was the first to consider the potential energy use of septimal powers, and its technology in the field of septimal energy is the most advanced in the world. Today, only the Sumeragi Group owns the technology, known as Glaives, capable of controlling septimal powers. They are the main antagonist group of the first game and of the Copen-centric spin-off, now known as the Sumeragi Institute of Human Evolution.

Nova (aka Shiden Tsukuyomi), the Mighty 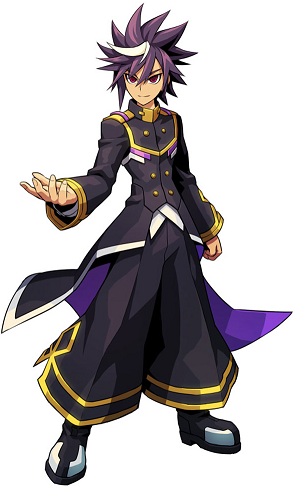 "How sad... another pathetic assault by QUILL?"

A small army of Adepts and soldiers serves under this young, charismatic Sumeragi lieutenant. He leads a project that would give Sumeragi total control over all Adepts, ostensibly for the safety and security of the nation. Nova/Shiden is an enigma who speaks in riddles and seems to generally look down on others. Not much is known about his septimal power, except that it is the most powerful among the Sumeragi Adepts. 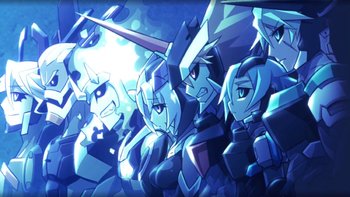 right to left'; Jota, Merak, Viper, Elise, Stratos, Carrera & Zonda
Seven Adepts who had their Septimal powers, which is naturally contained in the Septimosome, extracted into sword-shaped devices called Glaives. Their Glaives, which can be used remotely to control any unwanted bursts of power, allow them to stay out of trouble and live ordinary lives. However, in cases of emergency, Sumeragi's monitoring facility gives them access to these Glaives and they fuse with the septimosome inside, triggering a monstrous transformation dubbed "weaponization."
Merak 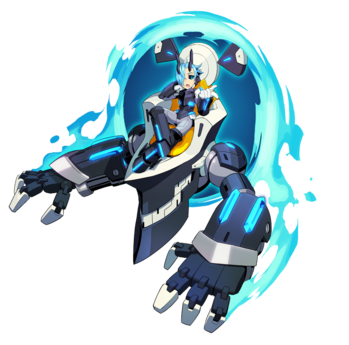 Merak is an Adept that commands Sumeragi's private army, and possesses the septimal power "Wormhole". He has a sharp mind and is valued as a strategist by Nova, but is also entirely apathetic, sometimes not even getting up when he's hit. Not that he needs to, considering he rides an armoured chair, which he uses in tandem with his Wormhole ability. Merak uses the Glaive "Unwavering Spirit". 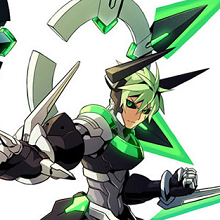 Jota is a Adept who protects the massive Sumeragi communications tower, the UTU Media Tower. He possesses the septimal power "Lightspeed", which allows him to control photons and even convert his body into photons to perform literal lightspeed movements. A former soldier whose unit was nearly wiped out by Adept terrorists until they were saved by Sumeragi operatives under Nova's command, Jota left the military under the belief that serving Sumeragi was the only way to truly bring peace and stability to his country. His Glaive of choice is the "Shadow Dragon." 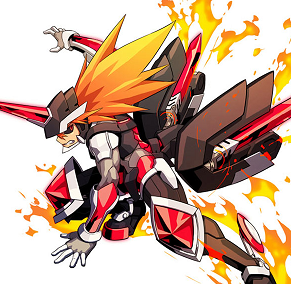 "You're going the wrong way, man. Hell's this way!"

He has the ability to compress thermal energy into small spheres called Angry Bombs that explode on impact. He can also coat his legs in flames and his Glaive is named "Lord of Fire". 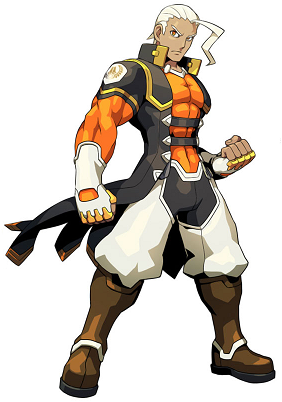 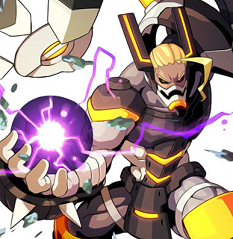 "Your lightning is no match for my magnetism!"

Carrera is an Adept in Sumeragi's Adept Hunter Unit and possesses the septimal power "Magnetic Arts". He's described as a "pure fighter" who joined the unit simply for the chance to battle powerful Adepts. He has a habit of speaking very formally, and mentions "strength" and "battles against titans" in just about every conversation.

Carrera uses the Magnetic Arts ability to produce a special magnetic field that attracts other Adepts. This field also has the effect of temporarily blocking the use of septimal power. Naturally, this is a quality that Sumeragi prizes highly, as it makes capturing Adepts all the easier. His Glaive of choice is named "Rockslicer."

to see her armor

Elise was a Swordswoman being held prisoner by Sumeragi. She possesses the ultimate septimal power "Rebirth," the ability to manipulate the soul into spinning out life for eternity. Sumeragi were attempting to implant Elise's brain with a more aggressive persona that ended up taking control of her original, weak-willed persona.

Unfortunately, Sumeragi were unable to contain her power, triggering a rampage that leveled the research facility she was being held at. Elise uses the "Living Blade" as her Glaive of choice, and controls "vipers" that she can shape into daggers. After being thrown, she can make them come back to life as zombies. 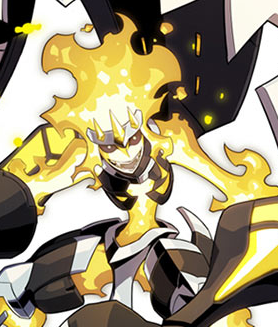 Stratos is a Swordsman that is held prisoner by Sumeragi. Prior to his capture, he was a handsome, popular man, although no trace of this man remains today. Stratos possesses the "Fly" ability and is capable of turning his flesh into fly-shaped particles of energy that can dismantle any matter and incorporate it into his body.

Repeated experimentation on Stratos has caused his powers to become too powerful for even his Glaive, "Lizardslayer," to control. The only thing that keeps him in check is a special drug called S.E.E.D., extracted from the experimental plant ViVid/Eidolon. 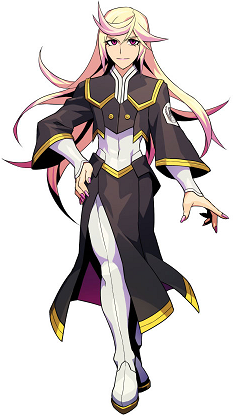 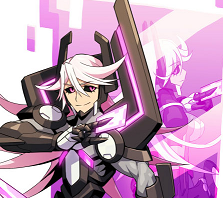 to see their armor

Zonda is another Adept in Sumeragi's Adept Hunter Unit. Zonda possesses the septimal power "Mirror," and uses the Glaive "Crow Child." Zonda's age, gender and background are all shrouded in mystery. Even among Sumeragi's top brass, very few know anything about Zonda. Even less is known about Zonda's Mirror ability, often reputed to be some sort of illusion-based power. Zonda is among Sumeragi's most powerful Adepts, and it is said to be as powerful as Gunvolt and Nova/Shiden.

Their true nature is revealed in the second game.

Romeo
An officer who appears in the opening and attempts to torture a seemingly captured Gunvolt, purely for his own enjoyment rather than as part of an interrogation. The tables are quickly turned on him, however.
Dr. Kamizono
Copen's and Mytyl's deceased father. Described as a tall man in his 30s with platinum blond hair, he worked at the Sumeragi Futures Institute of Technology as the company's top adept researcher. He pioneered much of their septima related technology, to the point where Nova claims Sumeragi is what it is today thanks to him.

Dr. Kamizono eventually reached the conclusion that adepts are a monstrous threat to humanity and must be eliminated, vehemently disagreeing with the top brass' desire to control them, an ideology that was passed on to his son Copen.

He died under mysterious circumstances, leading Copen to believe the top brass had him killed. In truth Dr. Kamizono was killed while experimenting on Asimov, then a Project Gunvolt test subject, who went berserk and destroyed the entire facility.

While only spoken of within the main series, the man himself appears within the Fleeting Memories prologue, giving further insight into his character and detailing the moments just prior to his demise.

Organization as a Whole 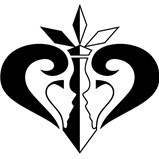 Eden's Symbol
Eden (full name "Multinational Power-user Association Eden") is a terrorist organization and the main antagonist group of the second game, comprising of Adepts from all around the world. They all plan on creating an utopia for Adepts by eradicating all non-Adepts.
Mysterious Girl 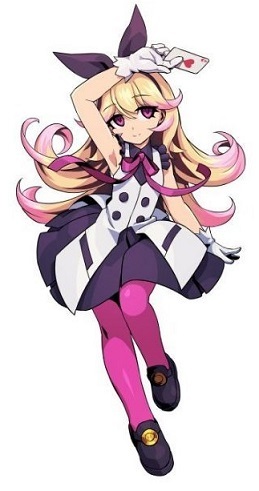 The priest and leader of Eden, also called "the Oracle". A young girl who appeared before Gunvolt and Copen, her childish appearance belies her more matured expression. She's an Adept, but her abilities are unknown. The members of Eden greatly revered her, believing her to be the savior that will make a new world for Adepts. 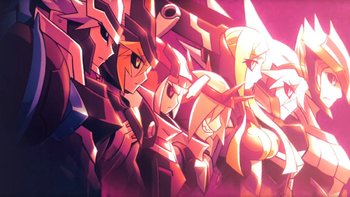 They're seven particularly powerful adepts who inspire other Adepts in Eden. Similar to the Sumeragi Adept's Glaives, they all possess special book-like devices named Grimoires (aka "Fairy Tales" in Japan), built from emulating the technology behind Glaives and combining it with the power of the Muse. Grimoires enhance the user's Septimal powers to phenomenal levels (by activating them, transforming the user) instead of limiting them like Glaives do. 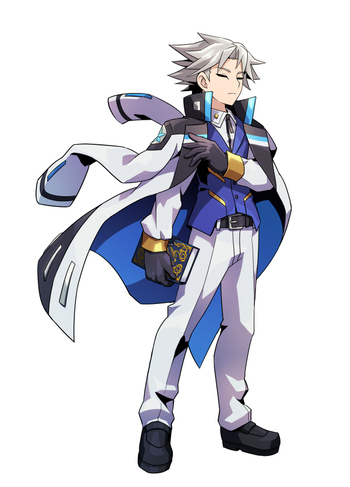 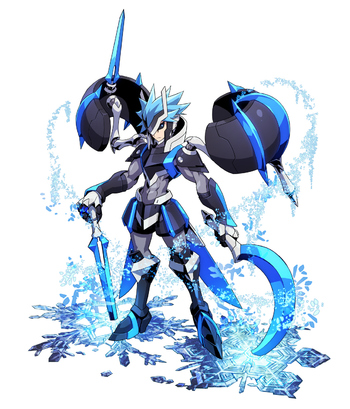 to see his armor
"The weak yield to the strong - as you will yield to my blade!"

The leader of The Seven and co-founder of Eden (along with Mysterious Girl), his ingenuity is one of his greatest assets. He's gifted with the Septima "Permafrost", which lets him manipulate ice, and is skilled with weapon combat, capable of wielding swords, sickles and chakrams. The boss of the stage "Frozen City". 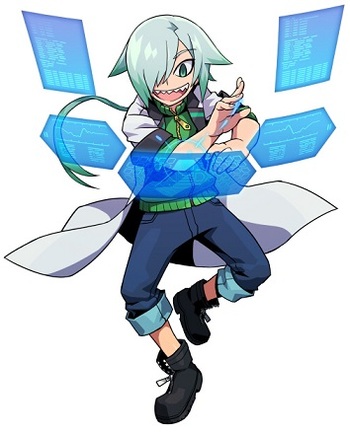 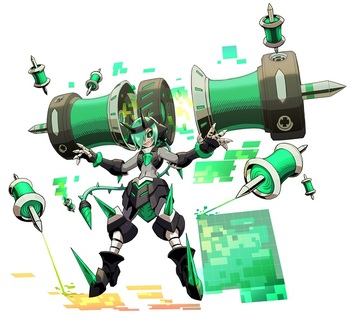 Formerly a contributor for uploading foreign movies to a certain website, he joined Eden after being fascinated by their transmission equipment. Likes to use internet slang in his speech, and tends to annoy people around him because of it, which he may not do intentionally. His Septima "Hack the Planet" turns physical matter into data and vice versa. The boss of the stage "Cyber/Virtuality". 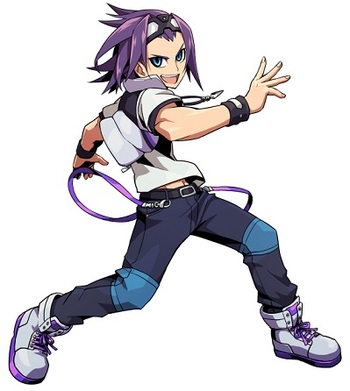 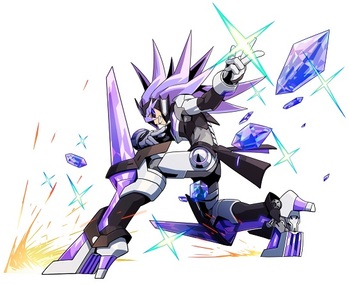 to see his armor
"There's an audience in place! Gotta let 'em see my face!"

As a former street dancer, his lively personality is famous within Eden. He's known for speaking in rhymes, painful or otherwise. With his Septima "Prism Cataclysm" that lets him create and manipulate crystals, he's constantly trying to find ways to combine his powers with his dancing to create maximum spectacle. The boss of the stage "Prism". 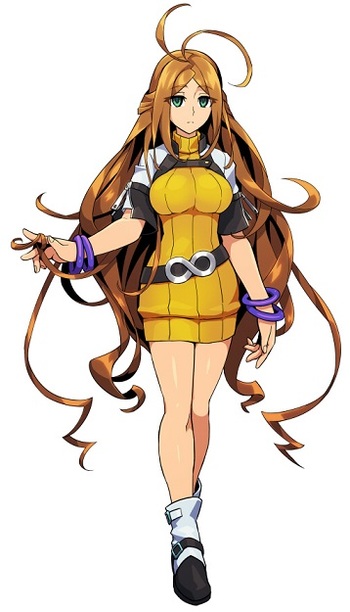 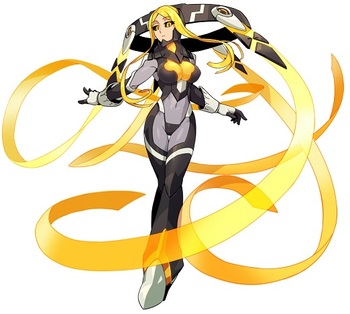 to see her armor
"The starlight whispers many secrets to me."

An enthusiast of astrology and well-known fortune teller within Eden, who joined them under the premise of being an oracle of the stars and expanding her knowledge. Her Septima "Splitting Ends" allows her to control her phantasmagorical hair. The boss of the mission "Tangled/Raveled", set in Babel Elevator. 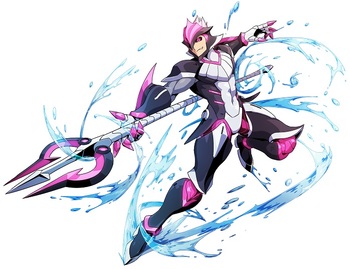 to see his armor
"I, Milas, fight for nothing less than the ocean itself."

An Adept who cares for the seas and joined Eden so he can continue his work of preserving them. With his Septima "Ichor" he can manipulate any sort of liquid, but due to his eccentricities he seems to prefer either fresh or ocean water. The boss of the stage "Water". 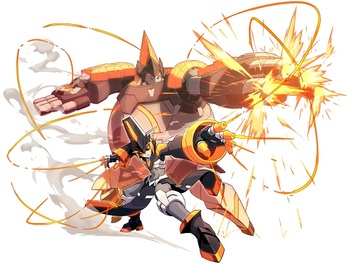 to see his armor
"Now gain wisdom by the fire of the Galette Krone!"

After years of persecution by non-Adepts towards him, he has hold onto the flames of revenge in his heart for long. He weaponizes a special robot, Galette Krone, that is designed to be controllable only by utilizing his Septima, "Puppetmaster", that manifests by special energy strings from his fingertips. The boss of the stage "Puppeteer", set in the Isle of Dreams. 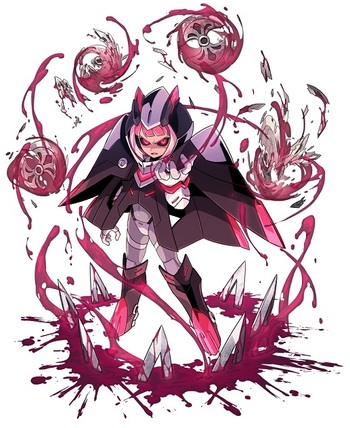 She's a young Adept girl who's quite sadistic and hot-tempered, especially if someone so much as say "tiny" or "small" within her earshot. She can manipulate metals through her Septima "Metallon". The boss of the stage "Beast". 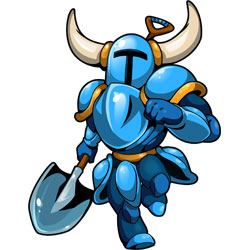 It's Shovel Knight! The most shovelrous knight of them all. No one really knows why he's here, or how he ended up in GV's world in the first place, but he's regardless doing his thing in dispensing shovel justice the best way we knows how. Defeat him and you'll get a pretty nifty prize!

Shovel Knight can be fought in Azure Strike Gunvolt 2, unlocked via his amiibo figure.