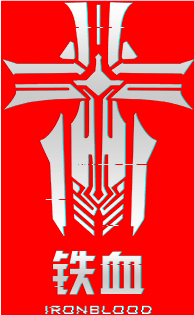 Representing the Kriegsmarine/Nazi Germany Navy, the Ironblood is a member of the "Crimson Axis" alliance with the Sakura Empire, and they have the least number of ships available among the four major factions in the game. Ironblood ships have a military theme with their outfits, reflecting the militarist presence in Nazi Germany during World War II, and they specialize in armor-piercing damage that deals heavy damage to bigger enemy ships. A common trait is their rigging either having some sort of monstrous traits, most prominently, a split in the hull of their rigging that resembles a Jagged Mouth (which ranges from cute on their destroyers to outright monstrous on their heavy cruisers, battleships, battlecruisers, and carriers) or being a bit of a Cute Monster Girl. Some of their ships such as Z46 and Prinz Eugen have some of the highest HP and defense stats in the game for their ship type, and their torpedoes are the only ones in the game with the Lock On attribute. The ships, however, have torpedoes as a secondary thing in part due to the middling torpedo stats seen on some destroyers and a number of cruisers.

Previously, like the Eagle Union, they did not have much of a single faction focus due to their small fleet size compared to the other three main factions. This lets them mix and match well with ships from other factions by providing defense, homing torpedoes, and AP damage and a few unusual units.

After the introduction of more ships with faction abilities or benefits such as Bismarck and Zeppynote Graf Zepplin also counts as one, but she was introduced much earlier than the other two, it is now arguably they might have as much of a faction focus as the Royal Navy.

Commander, your applause! All your problems will be gone if you let me, Z1, handle them!

The personification of the German destroyer Leberecht Maass

, the first dedicated torpedo boat destroyer built in Germany after World War I.

I am Z2, Georg Thiele, awaiting your orders. However, if your orders are flawed, please allow me to reconsider them. May our relationship be productive.

Guten Tag, Your Excellency. My name is Z23. Let's study and aim for the top together!

The personification of the German destroyer Z23

, the first Kriegsmarine destroyer commissioned after the disaster that was the twin Naval Battles of Narvik

, where the Wehrmacht overall completed their goals spectacularly... at the cost of fully half of the Z destroyer fleet. Z23 and the 1936-A class (also called the "Narvik" class in commemoration of the destruction of the Z fleet at Narvik) introduced a number of changes to the design, most notably the fact that they now mounted fifteen-centimetre guns as their primary artillery armament - these are guns previously used on German light cruisers. This made the 1936-As more akin to "pocket cruisers" than destroyers.

1936A-class destroyer Z25 reporting. Please don't worry, I will do my best in battle.

Commander, my fellow fleet members, hello~! I'm the singing and dancing Z35! Pleased to meet you! 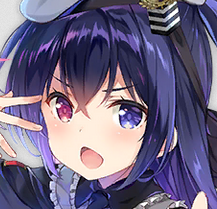 I was born as a destroyer in the Baltic Sea, the Devil Idol Z36! I once sailed in the gulf of Finland, but finally at the hands of the damnable cursed black object... (cough), in any case, look forward to my demonic strength to bring you victory!

The third Chuunibyou member in the game. She got dragged into forming an idol group by Z35. She is bad with eyedrops.

Are you the one who called for me? I am… I hate to admit it, but I was not given a name. For the time being, call me Z46.

The personification of the Type 1936C

-class German destroyer Z46... a ship that was lain down but never even launched or hull-completed.

So you are the commander? Aren't you a cute one, hehe... I will "take care" of you in the future.

Hi hi, it's me, Karlsruhe! I look forward to looking with you, commander~

You seem like a wise commander...I'm Köln, I shall support you with all my power, so just leave it to me.

Nice to meet you, Commander. I'm Leipzig… I'm often on the verge of fainting due to malnutrition, but I'll do my best to follow your orders…

Light cruiser, Mainz. There were plans for me to succeed the Admiral Hipper class, but due to circumstances, I've incarnated in this form. You get the rest without me telling you, right?

You are now the great Deutschland's servant. Think of it as an honor. Also, don't answer me "mhm," you will answer me "yes, ma'am" from now on. Understood?

It seems no matter where I go, the war wages on… Commander, Admiral Graf Spee, Deutschland-class armored cruiser number 3, has arrived.

Huh? You're the Commander? Is the situation so desperate that they let just about any random Tom, Dick, or Harry be a Commander!?

Mmm… Are you the Commander? I wonder how long you're going to amuse me. I'm expecting something from you.

I can't believe I'm here now… Hello, my name is Roon. I don't know this place very well yet, so could I please ask you to show me around?

The personification of the Roon, introduced as part of the World of Warships collaboration.

"Retreat" does not exist in my dictionary! Are you the Commander? Show me what you can do!

Hello, Commander, I’m Gneisenau. Despite my big sister being on the reckless-side, we are invincible as long as we are together, so I hope we can work together as much as possible.

Don't blame others over things that are out of their control. Nobody can predict the future.

The personification of Odin, introduced as part of the third round of World of Warships collaboration.

The truth (Wahrheit) only exists within my range.

The personification of the ever-famed Bismarck, she, curiously, originally only made an appearance in the tutorial. Data for her existed in the client since the game's original Chinese launch, though - she was originally set to be the only "Legendary" rarity ship in the game (one level higher than Super Rare, with a seventh ascension star). However, for the first two years of Azur Lane's operation, the character in the data was never made available. While her rarity never changed in updates, by early 2019, both San Diego and Warspite could be retrofitted to "Ultra Rare" rarity in the CN and JP clients, using many of the same assets as the data-mined "Legendary" status she would have.

After this, in late April 2019, various leaks began surfacing including a silhouette of Bismarck and what appeared to be a complete, ready to launch skin for her. These combined with teases from the game's English twitternote Mentioning the release of an unprecedented "mystery ship" and later quoting the lyrics of the song Bismarck by the power metal band Sabaton., Japanese twitternote Making historical references to the Battle of the Denmark Strait where Bismarck's trademark feat of sinking Hood with one well-placed hit occurred ala some remarks from Bismarck herself, and Bilibili accountnote Cryptically mentioning that players would soon be reunited with someone they met very early on in the game all but outright confirmed Bismarck's long-awaited release and an event revolving around her in the second half of May 2019, just in time for the anniversary of the Battle of the Denmark Strait. She was at last confirmed for a May 23rd worldwide release as part of China's second-anniversary stream. Later tweets would reveal her rarity to be Super Rare (SSR in Asian versions).

In the 2019 event starting on May 23, Scherzo of Iron and Blood, Bismarck was finally released. The event itself surrounds the battle of the Denmark Strait after the sinking of Hoodnote as seen in the tutorial and the eventual fate of Bismarck.

I've been imprisoned in the north for so long, unable to even return home, and now after so long you plan on taking me with you? …I see. Then I will come with you and see what's out there in the world.

Welcome to my symphony. Now, child, what is it you desire? Wealth? Honor? Or perhaps eternal youth?

The personification of H-39

"Friedrich der Grosse", introduced as part of the second round of World of Warships collaboration. Quite notably, she is one of the two vessels of Research Season II (the other being Azuma) to debut at a rarity above Super Rare or its equivalent of Priority for the Research ships, launching at "Decisive" rarity, utilizing a number of the rarity assets initially intended for Bismarck herself. Unlike Ultra Rare retrofits, she doesn't need a retrofit to reach this level and begins play as such.

Commander, my name is Zeppelin. Now then, all conditions have been met. It is time to raise the curtains on the Last Judgement.

Why are there other Ironbloods here, and why are they so... big? It's a bit scary...

The personification of the mighty Graf Zeppelin, she who bears a searing hatred for the entire world... transformed into the equivalent of a human grade-schooler, a circumstance not unlike what happened to a certain Royal Navy light cruiser. And now Her Tiny Terribleness will unleash her wrath on Azur Lane... and will cry a lot if she doesn't get her way. God help us and our sanity.

A miniature version of Graf Zeppelin, Zeppy was added to the game on April 26, 2019, to help commemorate that year's Children's Day

and Golden Week, across all regional servers.

I'm the Type VIIB Submarine U-47. I'm bad with crowds. If you don't need me then I'll go back home.

U-73 of the Iron Blood, reporting for duty! If there's anything that needs doing, just leave it to me!

Hey! You! That commander over there! How 'bout coming for a ride on my Great Shark? I'll show you real thrillin' time!

Heheh, this means I have a Commander as well now! I'm U-81, my favorite thing is playing hide and seek, and well, if you can't find me, just yell "U-81, I admit defeat!" and I'll have no choice but to come out.

I once swore an oath to Neptune Himself to protect Big Brother Bismarck wherever and whenever I was needed!... but there are some things I can't quite do alone... haha...

The personification of Kriegsmarine U-boat U-556

, Bismarck's "sibling-in-the-ways" - while they're hardly the same ship class, they were under construction together in adjacent docks at Hamburg, 556 being hull-completed about the same time Bismarck got a final fitting out and got commissioned. When the time came for 556's commission, her captain couldn't find a band... and Bismarck's captain obliged with Bismarck's own band. In return, 556's captain "swore an oath before Neptune" to protect "Big Brother Bismarck" wherever Bismarck needed help.

It was mostly in jest at the time, though it would turn out to be much more serious than anyone realized...

Type VIIC submarine, U-557, reporting in. My luck isn't so good. Please don't worry too much, just leave me alone... The mission... I'll do it properly.