Due to TV Tropes's spoiler policy, beware of unmarked spoilers! 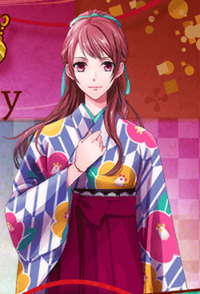 It's you!
A girl who has recently discovered her true calling and inherited Onmyouji powers. 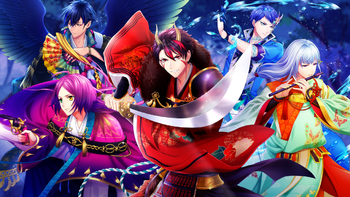 暁
These are our main heroes. From trying to get along to defeating spirits made of darkness and chaos, these guys overcome just about any obstacle with the contracts they've forged with you. They're nice. They're awesome. They're Ayakashi.
General
Koga Kitamikado

Voiced by: Jun Fukuyama
This is fate. Come to me if you need help. 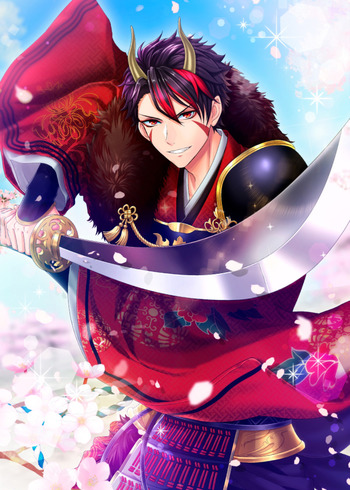 Personalia
Age: 24
Height: 180 cm
Birthday: May 7
Zodiac Sign: Taurus
Job: Entrepeneur
Type: Oni (鬼)
Likes: Getting rowdy
Dislikes: Knowing an outcome
Known throughout the city as an intrepid entrepreneur, Koga works tirelessly for the betterment of the Capital. He’s a thoughtful young man who loves to laugh and is often looked at as the “big brother” of the group. Kuya is often dragged into his capers, unfortunately...
Kuya

Voiced by: Takuma Terashima
Well, whatever. I'll give it my best shot.

The Lazy Misfit
Click here to see his battle form 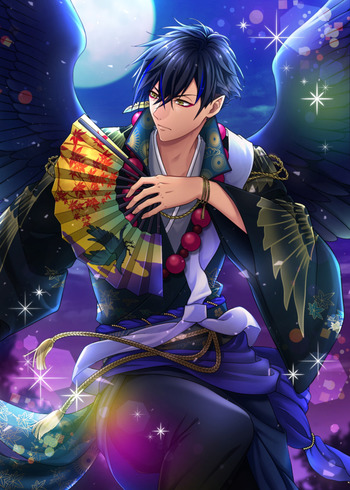 Personalia
Age: 24
Height: 170 cm
Birthday: July 16
Zodiac Sign: Cancer
Job: Writer (allegedly)
Type: Tengu (烏天狗)
Likes: Oji's rice omelet
Dislikes: Things that require effort
This lazy self-identified “author” has the ability to fall asleep anytime, anywhere. He claims napping helps him construct stories, but no one’s ever read anything from him... His childhood friends, Koga, Shizuki, and Toichiro, often get on his case about his lethargy, but Kuya always comes through when it counts.
Ginnojo

Voiced by: Yuichiro Umehara
If you need my strength, know that I am ready for any fight. 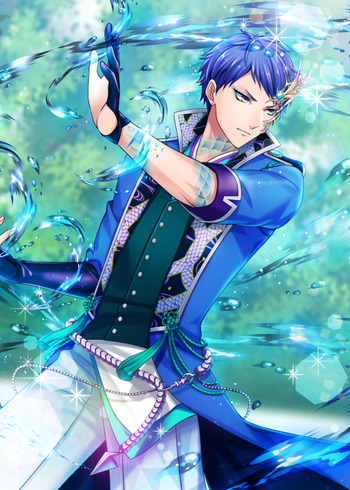 Personalia
Age: 54
Height: 177 cm
Birthday: July 31
Zodiac Sign: Leo
Job: Book Lender
Type: Mizuchi (蛟)
Likes: People with convictions
Dislikes: Hunger, the cold
An aloof man who works at Kusanagi Books, a small book lenders next to Milk Hall Raccord. Having spent most of his days surrounded by men, he is unused to the ways of women and is often confounded by them. Ginnojo’s commitment to his comrades and his sense of justice are beyond reproach. His appetite is said to be legendary…

Voiced by: Shun Horie
I guess I don't mind lending you a hand. 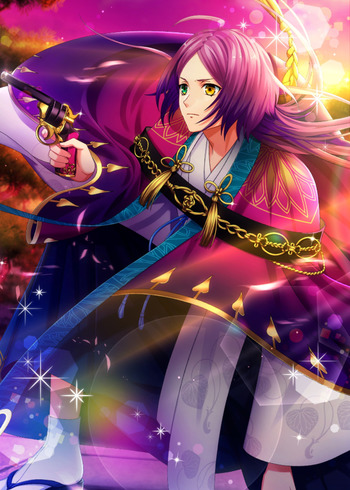 Personalia
Age: 16
Height: 175 cm
Birthday: February 23
Zodiac Sign: Pisces
Job: Art Student
Type: Satori Seer (覚)
Likes: Human Art
Dislikes: Surprises
An art student who lives and works at Milk Hall Raccord, a quaint restaurant run by Oji. This sharp-tongued young man has a caring disposition, but his inability to be honest with himself and those around him often frustrates him. As a Satori Seer, he wields the ability to peer into people’s hearts, yet he never uses it...
Yura

Voiced by: Takuma Nagatsuka
We meet again. How mysterious fate is... 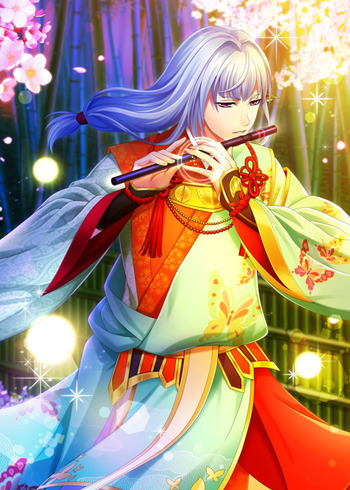 Personalia
Age: 1000+
Height: 167 cm
Birthday: September 25 (older)
Zodiac Sign: Libra
Job: Hermit
Type: Tsukumogami - Dragon Flute (付喪神 - 龍笛)
Likes: Sweets
Dislikes: ??????
The mysterious Yura lives apart from society with his twin brother, Gaku, in an abandoned shrine. Having lived for over 1,000 years, his wisdom is an invaluable asset to the team. However, a mysterious curse haunts him. Is that why he won’t allow anyone to hear him play his flute...? 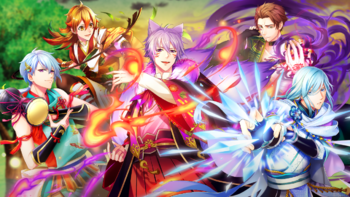 Voiced by: Kenji Nojima
I wonder if you can handle me, human. 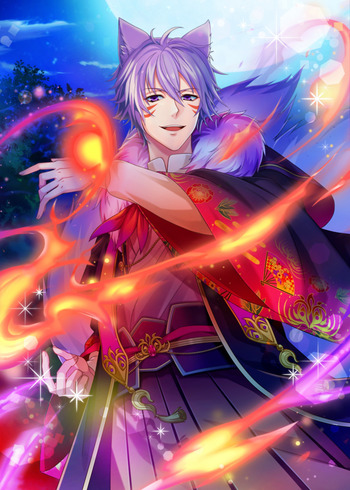 Personalia
Age: 24
Height: 177 cm
Birthday: January 14
Zodiac Sign: Capricorn
Job: Aristocrat
Type: Kitsune (妖狐)
Likes: Fried things (shh...)
Dislikes: Perceptive people
This nine-tailed fox is the youngest son of a prestigious family. He blends into human society by posing as a posh nobleman, with Shizuki as his personal valet. This spendthrift amuses himself by teasing his friends in all manner of ways. Be warned: deception is his bread and butter. But what is he searching for…?
Shizuki

Voiced by: Shinnosuke Tachibana
I am at your service, should you require it. 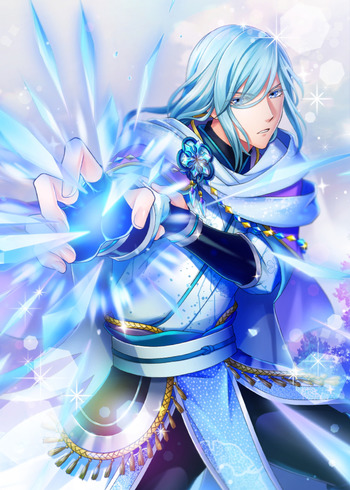 Personalia
Age: 27
Height: 180 cm
Birthday: January 11
Zodiac Sign: Capricorn
Job: Valet
Type: Yuki-Onna (雪女)
Likes: Rakugo comedy, Booze
Dislikes: Heat, wasted time
This snow spirit Ayakashi has sworn fealty to his master, Toichiro. Shizuki is well-read, logical, and takes great pains to remain efficient in all things. Despite his love of alcohol, his whole personality does a 180 when he has even a swig of the stuff… Koga and Toichiro are often left to pick up the pieces.

Voiced by: Yoshiki Nakajima
I'm gonna keep you safe. You can count on me! 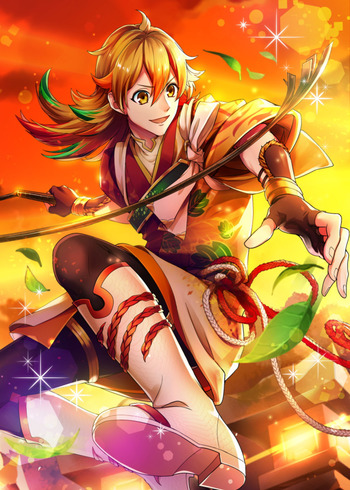 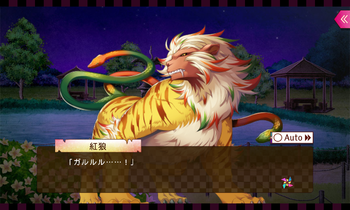 to see his true form.

Personalia
Age: 18
Height: 172 cm
Birthday: May 24
Zodiac Sign: Gemini
Job: Circus Performer
Type: ?????? (see tropes)
Likes: Foreign things
Dislikes: Being alone
A performer in the wildly successful Lorenzi Circus Troupe, this happy-go-lucky guy can put a smile on anyone’s face with one of his signature hugs. He’s a regular at Milk Hall Raccord and good friends with Oji and his neighbor, Ginnojo. For some reason, however, he refuses to tell anyone what kind of Ayakashi he is...Marked spoilers from Twilight on.
Oji

Voiced by: Yoshimasa Hosoya
Hey there, Bright Eyes! Need my help, do ya'? 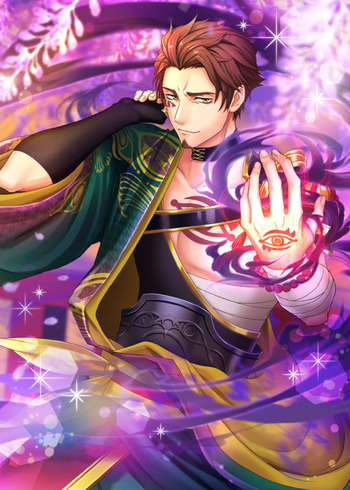 Voiced by: Sho Nogami
Finally, I've been waiting. Is my brother here? 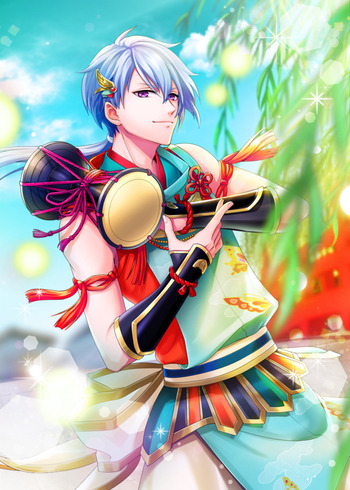 Personalia
Age: 1000+
Height: 167 cm
Birthday: September 25 (younger)
Zodiac Sign: Virgo
Job: Machinist
Type: Tsukumogami - Drum (付喪神 - 鼓)
Likes: His brother
Dislikes: Sweets
This Tsukumo-gami drum lives with his twin brother, Yura, in an abandoned shrine hidden deep in the mountains. A machinist by trade, this genius craftsman is known throughout the Capital by his pseudonym “Mr. Kakyu.” He dreams of the day he can hear his brother’s flute again...

Voiced by: Yuki Ono
I'm always happy to help you out! You know that.

Faithful, Beloved, and the Butt of Jokes
Click here to see his battle form 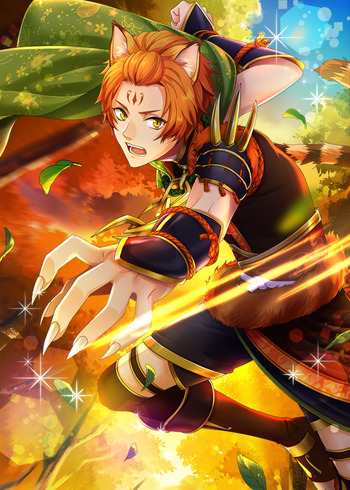 Personalia
Age: 15 (physically)
Height: 170 cm
Birthday: August 25
Zodiac Sign: Virgo
Job: Your Cat
Type: Nekomata (猫又)
Likes: Sardines
Dislikes: Water
Known by the heroine as her beloved cat “Tama,” this Ayakashi has actually been alive for well over a millennium. His naivete and boyish charms often make him the butt of the group’s jokes, much to his chagrin. However, he possesses an unassailable spirit that always lifts the heroine up when she’s feeling down…
Kagemaru

Voiced by: Tsubasa Yonaga
I'm gonna get as wild as I want. Ya' don't mind, right? 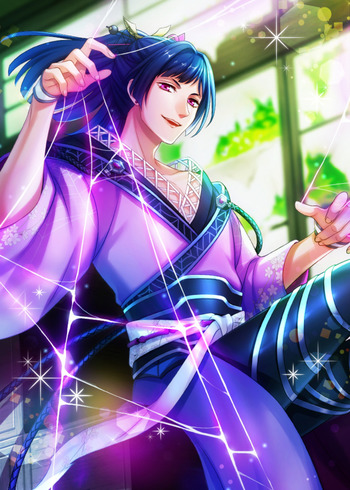 Personalia
Age: 28
Height: 180 cm
Birthday: October 12
Zodiac Sign: Libra
Job: Geisha
Type: Jorogumo (女郎蜘蛛)
Likes: The Strong
Dislikes: The Weak
This Spider-woman Ayakashi covets strength and beauty above all else, and finds himself peerless in both respects. He works as a geisha in the entertainment quarter under the alias "Yuzuru," whose looks and talent are widely known throughout the Capital... However, he’s concocting some sort of scheme... What could it be?
Akiyasu Kurahashi

Voiced by: Ryohei Kimura
I'm so happy I found you! ...you have no idea. 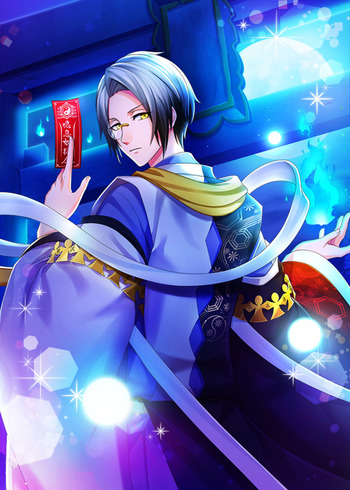 Personalia
Age: 21
Height: 177 cm
Birthday: June 10
Zodiac Sign: Gemini
Job: Onmyouji (陰陽師)
Likes: Studying (Divine arts/History)
Dislikes: All animals
Don’t be fooled by this man’s timidity, because his bashful stutters hide a powerful diviner. While shy at first, once he starts talking about Divine Arts, there’s no shutting him up. Onmyoji are outlawed in the land, but he still works in the shadows, his deeds a secret to the government… Close friends with Tatsuomi, Akiyasu’s day job is apparently with the military...

Unmarked spoilers for the end of Dawn Book I

Voiced by: Daiki Hamano
If it's for my country, I'll gladly volunteer my services. 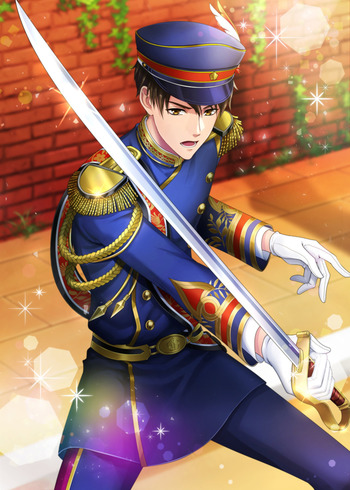 Personalia
Age: 21
Height: 182 cm
Birthday: March 22
Zodiac Sign: Aries
Job: Soldier
Likes: Rice & Miso soup
Dislikes: Stagnation
Childhood friend to the heroine, this affable and gallant new recruit is the perfect older brother figure. His father is a high-ranking officer in the military, and Tatsuomi longs to make him proud by creating a better world for all. Tatsuomi’s fashion sense is… unique, to say the least. It’s a shame he doesn’t realize it…
Professor Yakumo Koizumi
Personalia contain heavy spoilers

Voiced by: Yuki Kaji
There you are... We meet at last. 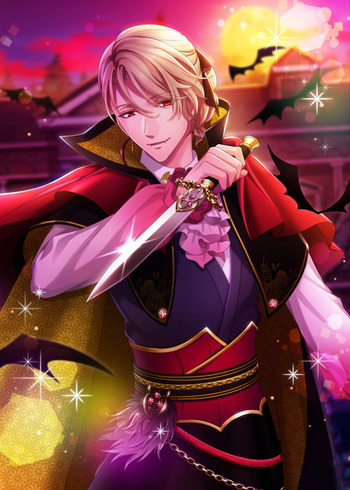 Personalia
Age: ??????
Height: 185 cm
Birthday: June 26
Zodiac Sign: Cancer
Job: Teacher
Type: Vampire (吸血鬼)
Likes: You
Dislikes: Things done by half measures
A Professor at the Imperial University. A dear friend to the heroine’s father, this charming gentleman can often be found chatting endlessly about the wonders of novels. He has a peculiar way of speaking, though, and his true intentions are shrouded in mystery…

Personalia
Age: 30
Height: 180 cm
Birthday: November 25
Zodiac Sign: Sagittarius
Job: A Major in the Imperial Army
Likes: Lively people & places
Dislikes: N/A (He's never taken the time to think about it)
An Imperial Army official who tasks the heroine with expunging the Wraith scourge from the Capital. As the commander of the secret task force Onikiri Assault Force, he's privy to all sorts of secret government intel...

The family members and close friends of the protagonist and the main characters.
Mototaka

A second Shizuki in the making.

A young kitsune from Toichiro's village. He is very loyal to Toichiro.

Toichiro's father; the chief of his kitsune village.

Not a pleasant breeze.

Toichiro's uncle. He betrayed the kitsune village and worked for the Senkitai. He was supposedly killed, but they Never Found the Body...Major spoilers ahead

The Onmyoji who put the hex on Yura.