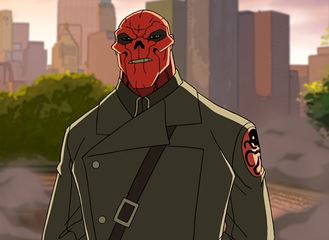 A brilliant, ruthless and power-hungry Nazi officer and prototype Super Soldier during World War II and the head of the terrorist group HYDRA. The Red Skull is the Big Bad of the series, leading a Legion of Doom called the Cabal in addition to his own HYDRA forces.

The infamous Mad Scientist of HYDRA who created a strong glue known as Adhesive X as well as a Super Soldier serum. In 1944, he captured Captain America's partner, Bucky Barnes over to Red Skull and turned him into the Winter Soldier.

Son of the original Baron Zemo.

Leader of the remains of Hydra after the defeat of Baron Helmut Zemo.