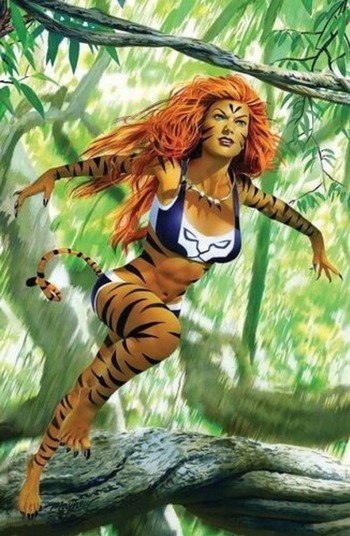 Notable Aliases: The Cat, Greer Sorenson, the Werecat, the Were-Woman

Tigra (Greer Grant Nelson) is a fictional superheroine appearing in American comic books published by Marvel Comics. Introduced as the non-superpowered crime fighter the Cat in The Claws of the Cat #1 (November 1972). The character was created by writer-editor Roy Thomas and artist Wally Wood (Marie Severin was then brought in to help layout the art), with her early adventures written by Linda Fite. She mutated into the super powered tiger-woman Tigra in Giant-Size Creatures #1 (July 1974), by writer Tony Isabella and artist Don Perlin.

Greer Nelson (née Grant) first appeared as The Cat. She later became Tigra through a mystic ritual that bound the soul of one of the Cat People, to her own. 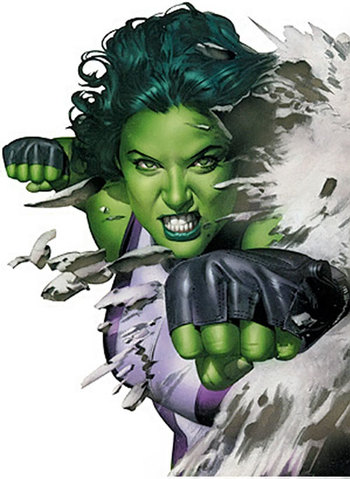 After being shot by mobsters, Jennifer Walter received a life-saving blood transfusion from her cousin Bruce Banner, aka The Hulk. Due to Banner's irradiated blood, Jennifer gained the ability to transform into the Sensational She-Hulk. She is a recurring member of the Avengers. 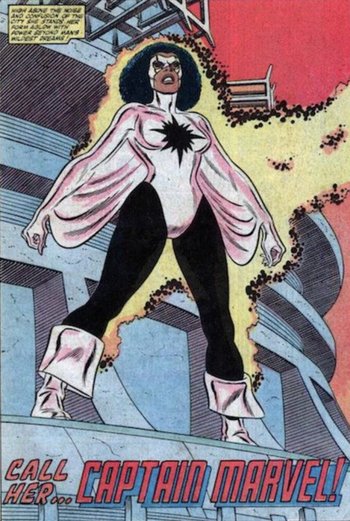 After being exposed to extra-dimensional energy, Lt. Monica Rambeau gained the ability to manipulate all energies of the electromagnetic spectrum. She has gone by many code-names over the years whilst utilizing these abilities as a crime fighter. Monica has served alongside the Avengers in various incarnations and operated as their leader for a time. 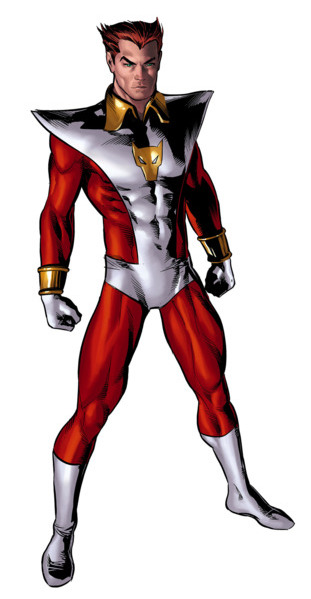 Eros is The youngest son of A'lar Mentor, and is Thanos' younger brother. Eros is also an Eternal and Avenger.

Barbara "Bobbi" Morse is an agent of S.H.I.E.L.D. and has served on several Avengers teams. 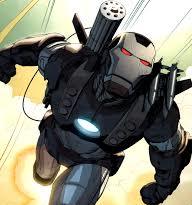 War Machine is a superhero originating from Marvel Comics. James "Rhodey" Rhodes is Tony Stark's personal pilot and one of the playboy's oldest friends. Rhodes also known as Rhodey has often donned the Iron Man mantle when the burden has been too much for his friend, but has also established his own identity as the War Machine and Iron Patriot. 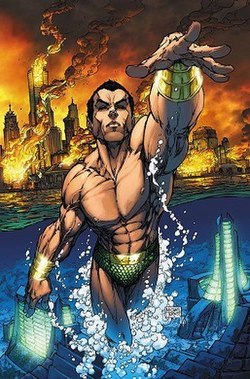 Namor the Sub-Mariner is the ruler of undersea Atlantis. The offspring of a sea captain and an Atlantean princess, he has been both a hero and a villain to the surface world. Namor is one of Marvel's oldest published characters with his origins in the Golden Age of comics. 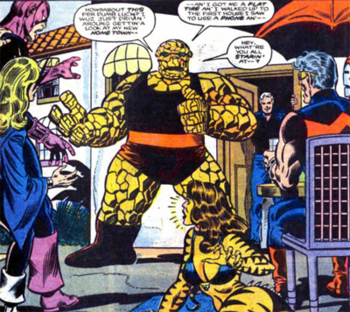 Ben Grimm, better known as the Thing, is the original quintessential tough guy of the Marvel Universe. But, because of his transformation, he's also the tragic member of the Fantastic Four. Ben was an ace test-pilot until exposure to intense cosmic radiation mutated him into a rock-skinned monster with immense superhuman strength. Ben's exterior is much harder than stone which gives him a rather gruff disposition; but deep down, he has a heart of gold. 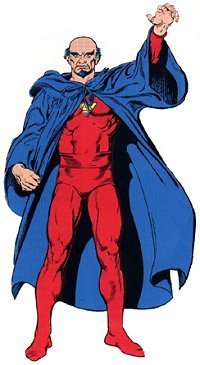 Doctor Druid was a psychiatrist who was attracted to the mystic arts. After being trained by a Tibetan Lama, Druid gained mastery over some mystic arts. 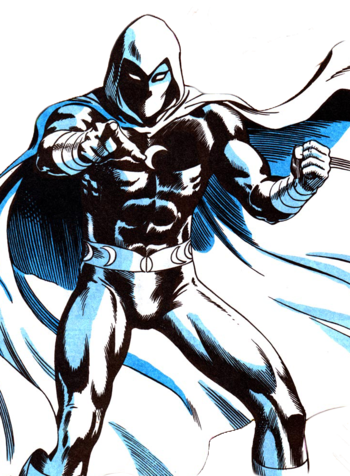 Moon Knight, Marc Spector, Steven Grant, and Jake Lockley: four different aspects of the same man who was resurrected by Khonshu (the Egyptian Lunar-God of Vengeance and Justice) to serve as his "avatar." Those unjust mortals who prey upon the innocents traveling at night, with powers that come from the moon, beware the Vengeance of the Moon Knight! 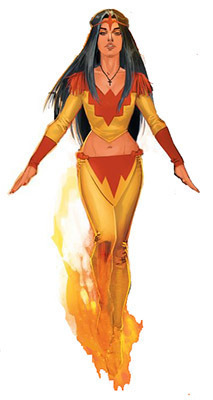 Bonita Juarez was raised as a devout catholic in Buena Vista in New Mexico. Bonita Juarez gained superpowers when she was hit by a ball of cold fire that came out of the sky. The fireball contained extraterrestrial radiation that gave Bonita energy-wielding powers. Initially fearful that this was the devil's work, Juarez eventually believed that the fireball was from the Firebird, a creature of Native American lore. Taking the creature's name, she became a costumed hero, eventually joining the West Coast Avengers. 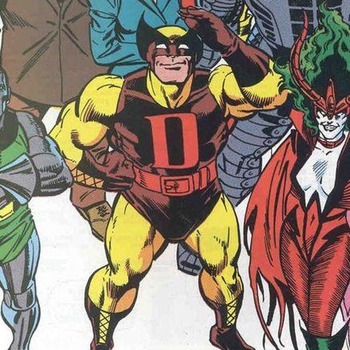 A former professional wrestler, Demolition Man has had a dubious and difficult career as a costumed adventurer. Although he began as one of Captain America’s closest allies during a difficult time for the patriotic hero, much of his life following that has proven hard. Recently he has started working as Sam Wilson's pilot and field back up. 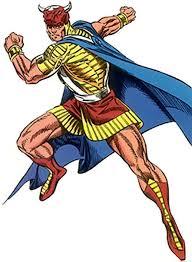 His true name lost in the mists of time, The Forgotten One is a member of the immortal race called the Eternals. He has been known by many names but he is once more who he must ever be: The Forgotten One. 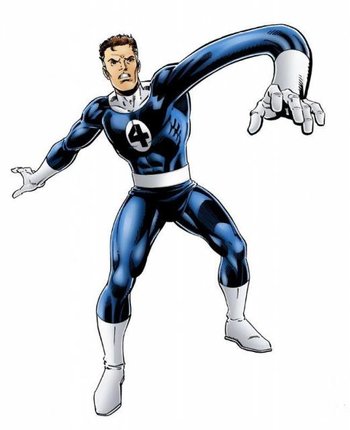 Reed Richards, also known as Mr. Fantastic, is the leader of the Fantastic Four. He can stretch his body to great distances due to his exposure to cosmic rays while in space. He is also considered to be one of the smartest men alive, using his brain to explore alternate dimensions and save the world alongside his family from science-based threats. 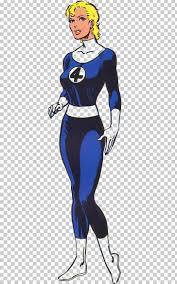 Susan Storm is a founding member of the Fantastic Four and later the Future Foundation. She is able to create invisible force fields of any shape she conceives and able to turn herself and anything she's in contact with invisible. Sue is the wife of Reed Richards and the mother of their children, Franklin and Valeria.

John Walker had his strength enhanced in hopes of being a hero for his country like his fallen brother. After a tenure upholding the mantle of Captain America, Walker re-established himself as U.S.Agent where he went on to have extensive service as a member of, and even leader to, the Avengers. 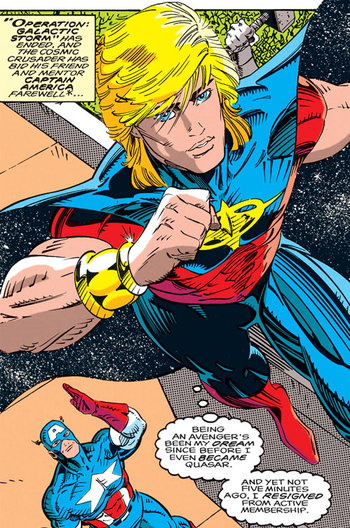 A former agent of SHIELD, Wendell Vaughn is a cosmic-powered superhero known as Quasar. Equipped with energy-manipulating Quantum Bands, Quasar was appointed Captain Marvel's successor as Protector of the Universe by Eon, and has been a valued member of the Avengers and ally to the Guardians of the Galaxy. In the past, he was in charge of Project PEGASUS, led the short-lived teams the Starmasters and the Annihilators, and acted as Avatar of Infinity. 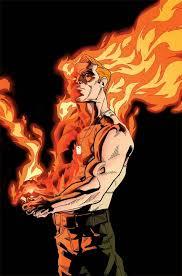 The original Human Torch, who fought in the second World War and was a member of the Invaders, is an artificial human created by Professor Phineas T. Horton. He is also (publishing-wise) the first ever Marvel super-hero!