Ozai
See his own page.
Ursa 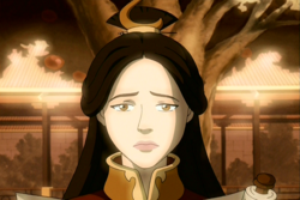 "That's what moms are like — if you mess with their babies, they're going to bite you back."

Even as Ozai's wife, Ursa was a caring mother to their children (though she had considerable problems dealing with Azula.) She was one of the few people who consistently supported Zuko, and it came as a hard blow to him when she suddenly disappeared.

Zuko
See his own page.
Advertisement:
Azula
See her own page. 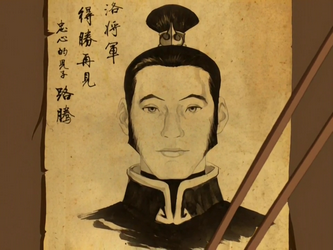 "If only I could have helped you."— Iroh

Iroh's only son, who like his father served in the Fire Nation army, and died during the siege of Ba Sing Se, prompting Iroh's withdrawal from the city, his retirement from the army, and his Heel–Face Turn. It also provoked Ozai's grab for the throne and everything that followed. 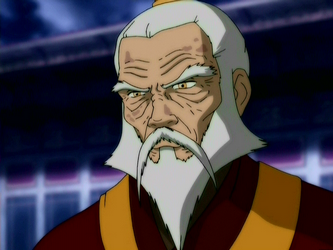 "I've been thinking: We should share this prosperity with the rest of the world. In our hands is the most successful empire in history. It's time we expanded it."

Sozin is the man responsible for the destruction of the Air Nomads, father to Azulon, grandfather to Iroh and Ozai, and great-grandfather to Zuko, Azula, and Lu Ten. As Fire Lord during Roku's era, Sozin plotted to take over the world as a way of sharing the Fire Nation's prosperity with everyone. Knowing that the Avatar would oppose his plans, he used the power of a passing comet to launch a devastating first strike on the Air Nomads, wiping them out (except Aang, who he missed) and leaving him free to wage a one hundred year war. Although he is now long dead, his comet will return to allow his grandson Ozai to do the same for the rest of the world.

Princess Zeisan was the younger sister of Fire Lord Sozin who was introduced in the canon ''Avatar Legends'' tabletop game. A non-bender, she devoted herself to the teachings of the Air Nomads to learn chi-blocking to fight back against her family's corruption, eventually marrying a leader of a renegade Air Nomad faction for political gain. 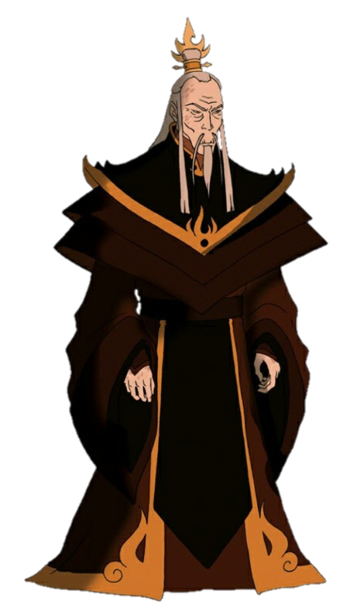 "You dare suggest that I betray Iroh? My firstborn? Directly after the demise of his only beloved son?! I think Iroh has suffered enough. But YOU, your punishment has scarcely begun!"

Azulon was the Fire Lord before Ozai, son of Sozin, father to Iroh and Ozai, and grandfather to Zuko, Azula, and Lu Ten. Famed for his military prowess and skill at firebending, he ruled the Fire Nation with an iron grip. He was a man with little warmth in him, sentencing men to death with a stunning callousness. Ozai seemed to have had as strained a relationship with him as he did with his own son, always seeking to earn his favor but always being met with scorn. After Ozai tried his patience one time too many, making an inappropriate bid for the throne, Azulon ordered Zuko's death, to teach his son a lesson in humility. He died shortly after giving that order, making way for Ozai to succeed him as Fire Lord.