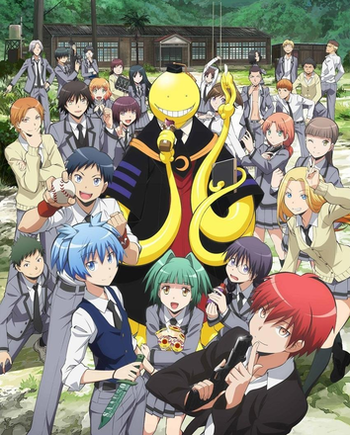 Kunugigaoka Junior High School's Class 3-E is infamous for harboring its bottom 5% ninth-graders, created to give the rest of the student body (faculty included) a target for intense discrimination and thus a motive to keep their grades up.

To add insult to injury, its students are banned from entering the main campus, instead relegated to a distant, rundown mountaintop Cram School. This isolation, however, is the ideal place for a top-secret mission placed upon its students to attempt to assassinate their alien-like teacher who is threatening to destroy the world in one year.

Despite being part of the class comprised of the school's "worst", each student has a characteristic which defines him/her and becomes his/her weapon. As the series progresses, they become better in assassination, P.E. and studying. 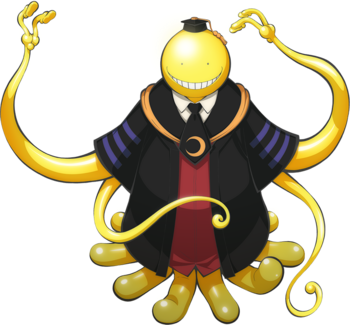 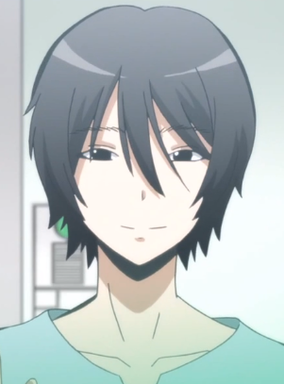 "Let's have an assassination that will make people smile and puff out their chests with pride. Each and every one of you can do that. You are talented assassins with hidden strength. That is advice from your sensei, as a target."

A mysterious octopus-like creature who was responsible for obliterating 70% of the Moon, leaving it a permanent crescent and also currently plans to destroy Earth after teaching the class for a year, and the homeroom teacher of Class 3-E of Kunugigaoka Junior High School.

"Hey. Wanna win? Step up your game — you've only got today."

An agent sent from Japan's Ministry of Defense to supervise Koro-sensei, while he also fronts as Class 3-E's P.E. teacher.

"C'mon, I'm an assassin — I'm supposed to be killing people, not hunting an octopus with brats."

A Yugoslav assassin who was sent to Class 3-E to kill Koro-sensei. After a failed first attempt she settles down as their English (Social Studies in the English dub) and infiltration teacher.

"Like you've got the balls to try [killing someone]. Go right ahead."

The most often seen student, and the main perspective character. He fell into Class 3-E at the end of the previous year due to poor grades. Mild-mannered, cautious and relatively weak (not to mention rather effeminate), he prefers to observe and collect data on Koro-sensei's weaknesses rather than participate in assassination attempts. Despite that, or perhaps because of it, he is considered to be one of the best assassins-in-training in the class.

"I think not enjoying yourself in a classroom where it's okay to kill is such a waste."

Nagisa's long-time classmate who joined late due to being suspended from school for trashing his teacher's office. He started off holding a major grudge against all teachers, and as such is one of the students most dedicated to the assassination. Koro-sensei helped him get over that particular issue, but he is still a near-sociopath who loves to beat people who aren't his classmates into unconsciousness.

"A true blade is one you don't even show to your close friends."

She's one of Nagisa's closest friends, and like him, she usually stands in the background and supports the others. She is the student who came up with Koro-sensei's name.

Nagisa's best friend and a former member of the baseball team with a crush on Kanzaki. 3rd best knife work, boys' side.

"I never know the right way to phrase things or how to express my feelings as a person. But I'm okay with that because equations and formulas always have a right answer. They're free of fussy word games and complicated emotions."

A timid girl who is good in math and science but weak in Japanese and other languages. She has a talent for making poisons, medicines and other chemicals. 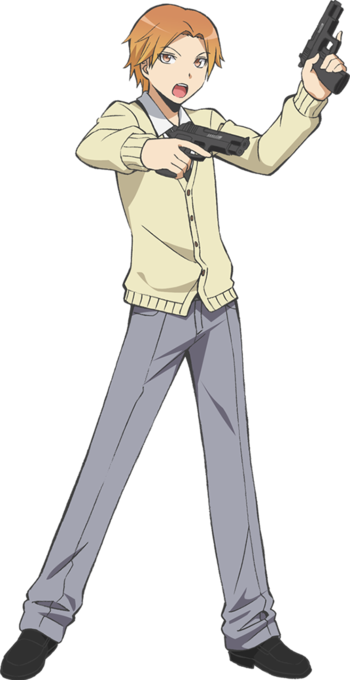 "All we need to do is beat the Class A in a pole pull-down battle, right? Piece of cake!"

The resident playboy of Class 3-E, popular even with girls from the main campus.

"In this class, even guys who are a bit unconventional are considered normal. This killing thing isn't so bad."

A laidback aspiring artist dumped into Class 3-E due to low grades, with the additional burden of lack of appreciation to his works.

A beautiful and popular student, said to be the idol of Class 3-E. Hailing from a conservative, wealthy family with a strict upbringing, she rebelled by constantly visiting arcades and ignoring her studies, which caused her grades to slip until she was moved to Class 3-E.

"Let's take our time and choose the right moment carefully!"

Class 3-E's female class representative and, besides being one of its smarter students, also one of Kunugigaoka's best swimmers, as well as one of the best natural leaders in class. Best knife work (tied), girls' side.

"Reception and negotiation techniques… once we go out to society, wouldn’t these become our sharpest blades?"

A girl who is also very enthusiastic about learning the art of infiltration assassination from Irina. 3rd best knife work (tied), girls' side.

"That's right!! Keep jumping around so he won't be able to escape from below!!"

An animal lover and third-best at knifework (tied), girls' side.

A stoic, serious girl who quickly stood out as the class' best female marksman. Similar to Chiba, she fell into Class 3-E after her grades slipped after being relied on by the students in the main building.

"I think we could grow up because... we did our best by searching for sure kill hits. Because someone or something raised us..."

A stoic, serious boy who quickly stood out as Class 3-E's best marksman. Like fellow sharpshooter Hayami, he fell into Class 3-E after his grades slipped after being relied on by the students in the main building.

A former member of the gymnastics club, and one of the most physically agile students and the class. Best knife work (tied), girls' side.

"Alright everyone! Let’s go in for the kill like always!"

Class 3-E's male class representative and an overall intelligent, athletic and good-hearted boy who comes from a very poor family. He was placed in Class 3-E as punishment for having a part-time job, which was a violation of school rules. 2nd best marksmanship, best knife work, boys' side.

A delinquent who is not very fond of the idea of killing his monster teacher. One of the more aloof students until he Took a Level in Kindness. After finding the enthusiasm to kill Koro-sensei with the class, his talent for encouraging and motivating people was revealed.

One of the two guys who hangs around with Terasaka. His family has a ramen restaurant which doesn't have good business. 4th best marksmanship, boys' side.

One of the two guys who hangs around with Terasaka. He loves motorcycles since his family has a small motorcycle company.

"Well, I'm a fan of the printed word. So I want to be surrounded by books. It would be bliss if I could be a librarian at a huge library or something."

A delinquent girl who often hangs around with Terasaka and his friends. She has an interest in dark literature. 3rd best marksmanship, girls' side.

"Maybe I'm only speaking for myself. But, if you ask me, a 3D girl has nothing on a double-D."

One of the better students in the class. His family has ran a hospital for generations, but his low grades made him into a Black Sheep.

A portly girl who is good with tailoring and is a long-time friend of Yoshida. 2nd best marksmanship, girls' side.

A girl with long red-blonde hair who excels in English. She has a mischievous personality. 4th best marksmanship, girls' side. 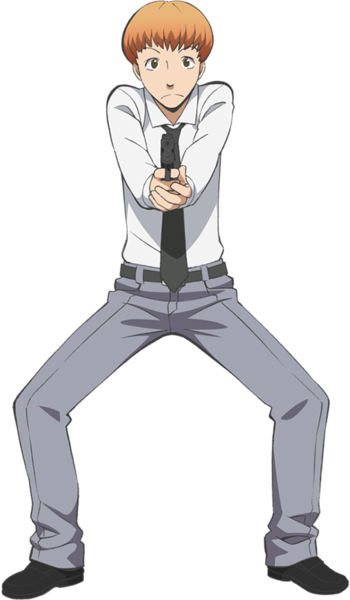 A boy who is good in editing videos and is interested in film production. 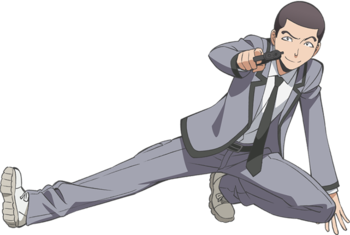 "In the end, pornography will save the world." 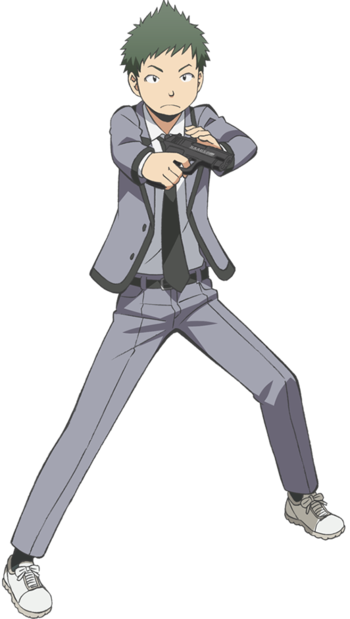 "This damn given name of mine gave me nothing but trouble."

The fastest runner in the class. He's very embarrassed by the legal name bestowed on him by his parents. 4th best knife work (tied), boys' side.

"And so, The culprit was you, Mister man!"

A girl who loves manga (especially Jump's series) and has a weakness for making stories. She's shown to have some detective skills.

The two transfer students are special assassins sent by the government to aid Class 3-E's efforts against Koro-sensei. Their physical capabilities have been scientifically enhanced and their personalities (and their bodies) are quite eccentric as a result. Since both assassins are officially registered students at Kunugigaoka, Koro-sensei, under the conditions of his contract, is not allowed to retaliate against either of them.
Autonomous Intelligence Fixed Artillery (Jiritsu Shikou Kotei Houdai) / Ritsu

A transfer student and a literal killing machine with the face of a girl, designed to operate the combined armaments on warships and warplanes, and adapted to kill Koro-sensei. She is the inferior assassin to fellow assassin Itona, but she is still one of the most dangerous students.

"I might fail a hundred times, but I'll be sure to kill him before it's all said and done. You've got my back, right guys?"

The second transfer student who was sent to assassinate Koro-sensei. He's the superior assassin to Ritsu, and he's a creature similar to Koro-sensei who refers to him as his "brother".