An organization tasked with protecting the timeline from Time Criminals, who have an extreme apathy to humanity.

The authority figures of the the organization.

Rip Hunter's old friend and mentor and a member of the Council.

A member of the Time Masters council.

A Time Master and captain of the Time Ship Acheron.

A time traveling bounty hunter who is intent on capturing Rip Hunter. He has a personal motive for this, however...

A group of mercenaries built to bring in the Legends should Chronos fail to do so.

A metahuman who has the ability to freeze motion and the Time Masters' most feared agent. She is sent out on their most desperate missions.

An artificially intelligent construct from the future similar to the Gideons.

A member of the Time Masters and caretaker of their recruits.

In General
The Time Masters' successors, formed by Rip Hunter after he came to believe he no longer had any place on the Waverider. They try to take the Legends' place as protectors of time, which causes the two groups to butt heads.

After Neron nearly caused havoc in Washington with magical creatures the Bureau were meant to safeguard, the government ceased all funding and has been shut down. 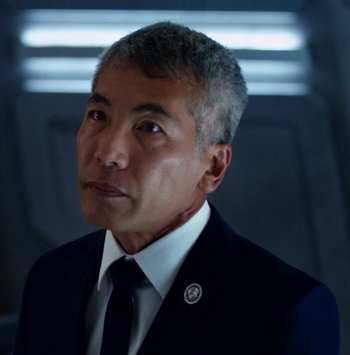 Rip's co-director in running the Bureau. Despite this, the two often clash.