The Elevrium is the sub-realm that is the native home of the Dekn. It is divided into four regions: Galliptis, Nearaive, Syrith, and Vinlar. Each region is ruled by the Dekn Emperor, from his home in the capital of Taveril'domaine. The region of Vinlar is unoccupied, due to being a scorching hot wasteland.

The capital of the Elevrium. It is home to the Dekn Emperor and the Dekn Court (among other things).

The Court of Masters

In General
The court of the Dekn Masters. They are the utmost authorities on various specific matters within the Empire.

The former head of the Persophelum Renegade (and partner of The Carver) from Universe A, who crossed over to the new universe. For tropes related to him, see his folder under Dekn. 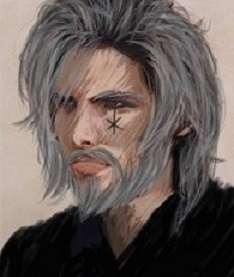 The Dekn Master of Thievery, Ba'al is the son of Persophelus Redgrave. He is a legendary criminal, and is rumored to have stolen items of power from the Eldrici — and even one of the Hethe themselves.

Some of his thefts are even said to have confounded the Hethe.
"Master" Belial 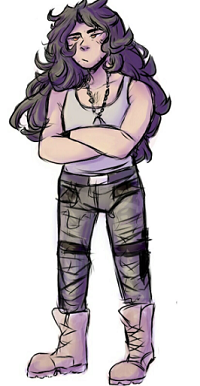 Artist's depiction of Belial.
Appears In: The Dekn Court, Archives of the Scholar

Belial is the former Dekn General and Dekn Master of Sight and War, and the current leader of the Scarred Marauders.

Andras is the Dekn Master of Forbidden Knowledge as well as the current administrator of the Alunerium. He is the anon that torments Faust, and eventually ropes Faust into a very one-sided deal. He is also the person responsible for saving Shanna's life, and holds it over her head even still to this day.

Appears In: Archives of the Scholar, Tales from the Dekn Court, The Siren's Saga
Played By: RMSBorges (voice)

The Dekn Master of Beguilement and Debauchery, and founder (and patron deity) of the Society of the Purple Rose (who worship him as the "God-Emperor Euclidis"). Faust kidnaps him in fulfillment of a deal with Andras.

The Society of the Purple Rose

In General
A cult founded by Marchosias Aversen, both to stroke his own ego and to provide a laboratory for his social experiments. They have their own blog

The Herald of the Purple Rose. A former Dekn singer-songwriter, she is the only known Dekn (aside from Marchosias himself) to possess the power of Persuasive Speech.

The Counselor of the Purple Rose.

The High Companion of the Purple Rose.

Marchosias' Consort within the Dekn Court, and the High Priest of the Purple Rose.

The Messenger of the Purple Rose, until leaving the blog after being outed as disloyal by Hybrid-Tea and replaced by Falstaff.

Lysandra's replacement as Messenger of the Purple Rose, and the head of their child indoctrination experiment.

The powerful and brutal head of the Persophelus Sanguinal'estiere crime family. The son of Jacques Redgrave, he controls the black market for Rethryc crystals (and established Blood Flags just for the purpose of laundering them).

Shanna Averil's aunt. She first who appears as a minor character, offering advice and encouragement to several other characters anonymously on Tumblr. Eventually, her true intentions — to find and rescue Shanna from her captors — are revealed. She is officially employed in a diplomatic role at U.M.E.E.C., but she uses this role as a cover for her actual work of gathering and selling information.

A mostly forested region, known for being home to a massive Ethric supervolcano (which houses its hold city).

The hold city of Nearaive. It was carved out inside the massive dormant volcano, and was built to be the Dekn answer to Windecayn.
General

A desert region which is home to many a Dekn settlement.

The hold city of Galliptis. Originally founded as an U.M.E.E.C. base, it grew to include many amenities, and has become a popular tourist destination for Dekn and humans alike.
General

A frozen wasteland. It has no hold city, and contains only a few small towns.
General