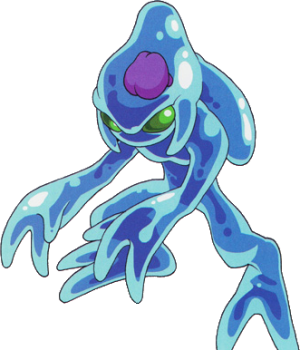 The water god and guardian of the Chao. 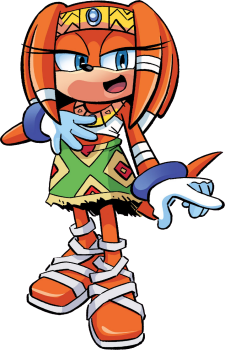 The spirit of Pachacamac's daughter. 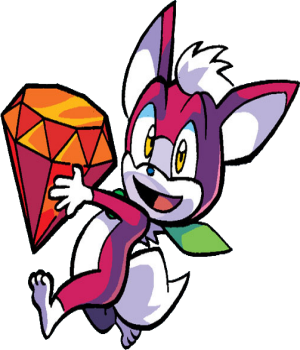 A.K.A Light Gaia. The same winged furry fella from Sonic Unleashed introduced in the comic proper in the new universe, he's put in charge of guarding a Chaos Emerald which got the Hooligans after him. Team Chaotix managed to save him and he's hung around with Knuckles helping to find the missing pieces of the Master Emerald. Eventually he meets up with Sonic and joins the Freedom Fighters in helping to restore the broken Earth following the Worlds Collide crossover.

First Spark
The entity that began all life in the universe. Appeared before Chip in the Mazuri Gaia Temple and helped him regain his memories.
Dark Gaia
The dark entity that slumbers within the Earth's core. Normally only to be awoken every thousand years, the Earth being split apart due to all the Genesis waves and Eggman ramming into Sonic after the end of Worlds Collide caused it to awake prematurely. With it's dark power spreading across the planet as monsters and likewise causing negative influences in certain areas as well.

King and Queen of Meropis. A pufferfish and Angler fish respectively.
Princess Undina 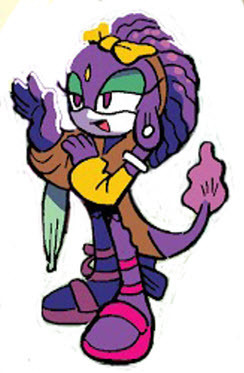 Princess of Meropis and daughter of Puff and Angelica.
Captain Striker 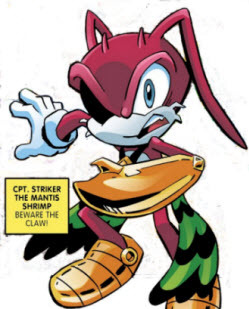 Leader of the Meropis city guard. A Mantis Shrimp. 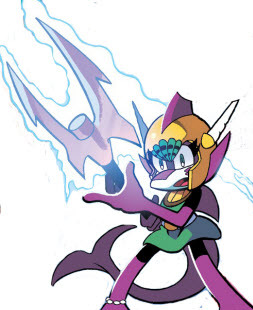 The lieutenant of the Meropis City Guard. A dolphin.

A group of otherworldly beings who oversee the world.

A group of individuals replacing the Ancient Walkers after they died. 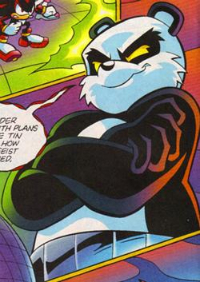 A giant panda bear-like entity who lives in and controls the Special Zone, formerly the Zone of Silence aka the Void.

Knuckles's biological father and member of the Brotherhood of Guardians. When he had a nightmarish vision about his then-unborn son dying in battle against a horrible threat, he consulted his grandfather Athair and was advised to prepare. Applying genetic experiments to himself for Knuckles to inherit, and exposing Knuckles's egg to Chaos energy tapped from Angel Island's own emerald, Locke sought to give Knuckles the power to protect his people. However this, along with the traditional Guardian training, caused his wife to divorce him. After faking his death in front of Knuckles when the latter was 10, Locke watched over his son from inside Haven, the stronghold of the Brotherhood of Guardians. Locke ultimately died to save his son from Dr. Finitevus' schemes.

The Brotherhood of Guardians

A collection of Knuckles' ancestors, including his father Locke and several other ancestors, that protect Angel Island and the city of Echindnaopolis. For most of the book, they chose not to interfere with world events more than they had to, feeling that deploying their advanced technology in an unprepared world would be more harmful than good, allowing Robotnik to operate freely. Eventually, Eggman would advance his own technology enough that, with some assistance from the Dingoes, he eventually stormed and razed Echindnaopolis, slaughtering most of the population. After a final, taxing battle with Eggman's forces, the exhausted Brotherhood was captured by Dr. Finitevus.

Knuckles' grandfather and an outcast from the Brotherhood. The only member of Knuckles line to forgo becoming a Guardian, opting instead to become a mystic and protect the world from mystic threats along with the Ancient Walkers.

Friend of Knuckles and son of Kragok.

Alternate future versions of Mobius ten years later. Light as you can imagine is the somewhat good version where civilization still stands albeit just ruled under the tyrannical grip of King Shadow least till Sonic returns.
Lara-Su

The future daughter of Knuckles and Julie-Su seen in the "Mobius: 25/30 Years Later" storyline note Known as "Light Mobius".

Confusingly, due to some very convoluted Time Travel plotlines there have been two (or depending on how you count, three) distinct versions of Lara-Su shown in the comic: one affected by time travel, and the other a time traveler herself. For tropes pretaining to her Dark Mobius counterpart, see "Jani-Ca".

She is the second, and better known, version of Lara-Su appears in the "Mobius [X] Years Later" storylines as a would-be successor to her father as the Guardian of the Master Emerald. Initially Knuckles resisted letting her take the job, but ultimately relented. Her reality was re-written due to King Sonic's own tampering with the timeline, but this worked out mostly to her advantage as one of the major changes was that Knuckles allowed her to train as a Guardian much earlier and ascend as a full-blooded Action Girl.

Both versions of Lara are feisty and hot-tempered, much like her parents, and both ultimately became full-blooded Action Girls. However Lara-Su of the "Mobius [X] Years Later" arc seems more peppy and cheerful. As a Guardian, she possesses all of Knuckles' abilities, including flight and Chaos Control.

The twin children of Sonic the Hedgehog and Sally Acorn from Light Mobius. The twins share their father's love for adventures and their mother's royal responsibilities. 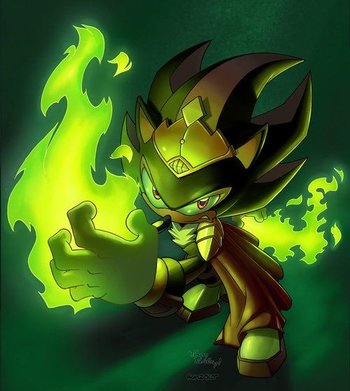 In the Light Mobius timeline, after Sonic vanished following Dr. Eggman's demise, Shadow rose to power and conquered all of Mobius in one year. He brought his own version of unity and peace to Mobius through brutal law enforcement, with the Dark Presence (formally the Dark Legion) as his enforcers. Sally Acorn married him in an attempt to bring some stability and leniency to his brutal leadership, with very little success.

Things only got worse over the following two decades, as due to his Chaos abilities, Shadow was fully aware of the original timeline, and was determined to keep anyone with lingering memories from trying to restore it. Arresting individuals such as Rotor, Sonic, Tails, and Lara-Su for "treason". His brutal rule came to an end thanks to the efforts of Sonic, Tails, Knuckles, and Lara-Su, who used Chaos Control to place him in suspended animation.

However, five years later, the Dark Presence successfully invaded Castle Mobius and revived the former king from his imprisonment, enraged, Shadow proceeded released Tikhaos upon the world as revenge. While Tikhaos was stopped by the Future Freedom Fighters, what became of Shadow is unknown.

A monster created from the fusion of Tikal and Chaos's souls. It lives sealed underneath the castle.

Dark Mobius is an alternate future destroyed by Enerjak with very few resistant fighters remaining until Silver arrives and helps overthrow the tyrant. 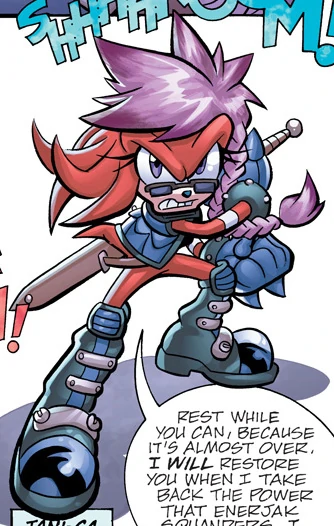 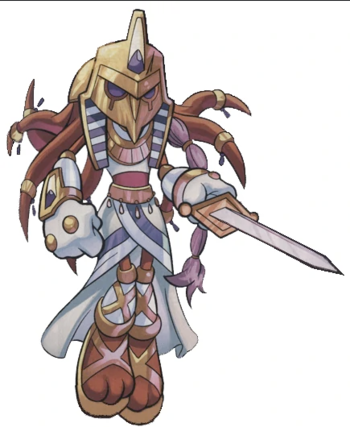 The future daughter of Knuckles and Julie-Su seen in the "Fractured Mirror" arc of Sonic Universenote Known as "Dark Mobius".

Confusingly, due to some very convoluted Time Travel plotlines there have been two (or depending on how you count, three) distinct versions of Lara-Su shown in the comic: one affected by time travel, and the other a time traveler herself. For tropes pretaining to her Light Mobius counterpart, see "Lara-Su".

Tecnically the first version of Lara-Su shown in the comic. She had gone back in time attempting to Set Right What Once Went Wrong by rescuing her father from an assassination attempt that had led to her growing up in a a Bad Future, only to find that Knuckles had never died and in fact had been the cause of the Bad Future. This instance of Lara's personality introduced herself as "Jani-Ca" and was dropped from the comic after her introduction, not getting a full resolution to her plotline until the "Fractured Mirror" storyline in Sonic Universe, where she is shown as the battle-hardened leader of the last remaining Freedom Fighters.

Both versions of Lara are feisty and hot-tempered, much like her parents, and both ultimately became full-blooded Action Girls. However Jani-Ca's personality became noticeably more brittle and jaded as a result of having grown up in a Bad Future ruled over by her own father as the Big Bad, 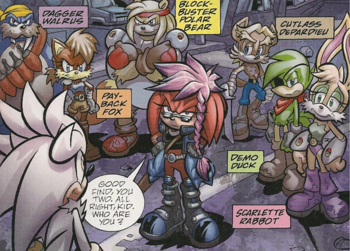 The last line of defense against Dark Knuckles. 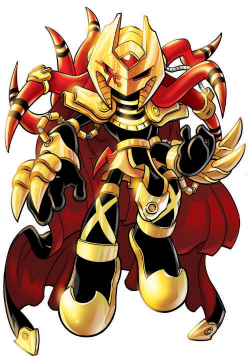 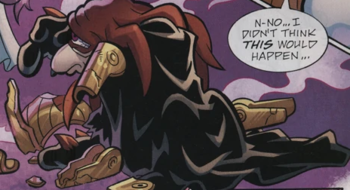 A version of Knuckles from Dark Mobius who went mad with power after becoming Enerjak.

A planet in the shape of a ring. It's unique gravity allows for life, cities, forests, oceans, etc. to form on its inner and outer perimeter. It is the home-world of the BEM, a four-armed race of scientists.

The dominant race on Argentium. The BEM are scientists famed across the universe for their resources and ingenuity. Their actions on Mobius lead to far reaching consequences. 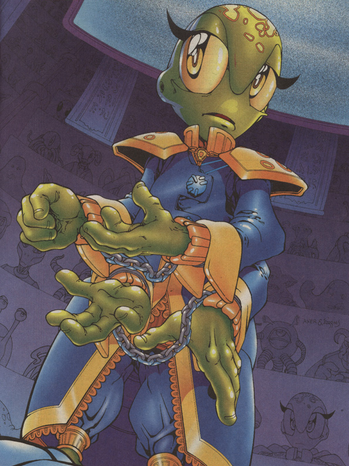 A BEM scientist with a focus on roboticization. She discovered a society, on the planet Biotex, many years ago that had turned themselves robotic. Her well-intentioned but naive attempts to reverse the process lead to the species' extinction and since then her attempts to correct her mistakes have had mixed results.

Harry
A Dingo in the Dingo Regime. Harry was born into military service but never really fell into step with the others of his militant upbringing. When the Dingoes are freed from the pocket-dimmension and forced to settle in Echidnopolis, Harry is willing to settle down as a Cabbie and live a normal life. Naturally he get's caught up with whatever shenanigans the Chaotix get up to.