The other antagonists of the Sonic the Hedgehog comic series that aren't affliated with Eggman and out for their own goals.

A three-man batch of mercenaries headed by Nack the Weasel. 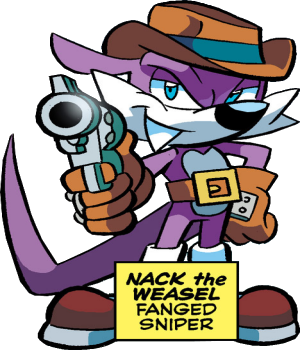 An amoral bounty hunter who works for whoever pays him. Usually all business, his dealings with the Freedom fighters have made it personal, and he won't hesitate to take an opportunity to make Sonic and his friends' lives miserable. While he has a good track record against Sonic himself, Nack seems to have women troubles with the FF's ladies...

Tropes Applying to Both Versions 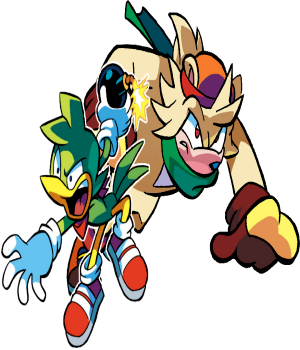 One's an overtalkative, more-than-slightly bonkers duck who can spontaneously generate bombs; the other's a mute, hefty polar bear. Together, they cause crime. Usually in the employ of another villain, Bean and Bark don't seem to carry any sort of grudge against the heroes, and are mostly in it to earn a quick buck and have fun. Both characters first made their appearance in the Sonic franchise back in a game called Sonic the Fighters.

Tropes Applying to Both Characters 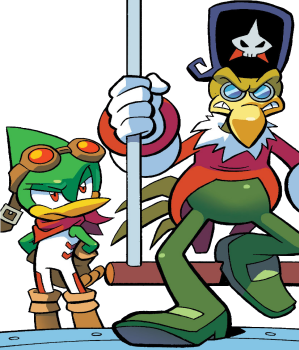 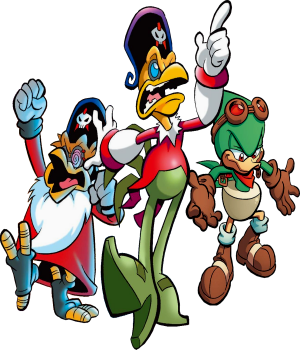 Hailing from the spin-off game Tails Adventure, the Battle Bird Armada is a militaristic group of birds ruled by a long line of Battle Lords. They see the sky as belonging to them and all other races as (literally) beneath them. The current leader is Battle Kukku XV, a classy fellow who is not someone you want to see angered, and his son Battle Kukku XVI a.k.a. Speedy. The head of their science division is Doctor Fukurokov, who researches and creates the various weapons and technologies the Armada employs. From their enormous flying fortress, the Armada searches for the key to their past and future: the mysterious Babylon Gardens.

As of October 2015, it's been revealed that the Battle Kukkus work for Eggman in the rebooted world. 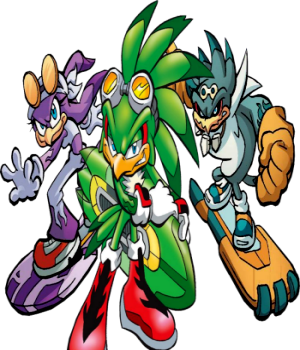 A group of rogue former agents of the Battle Bird Armada. They seek treasure and riches of all kinds, and also have their eye on the Babylon Gardens.

Six of the evilest of the Zeti kind from the Sonic Lost World. They make their debut in the comic proper in the Worlds Unite crossover as one of the major antagonists. 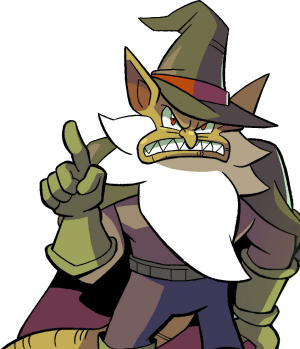 A wizard and recurring villain. He had once saved Maximillian when he was banished into the Zone of Silence, while making him swear fealty to him, making the wizard a legal ruler. He had been trying to take over Mobotropolis twice and failed thanks to Sonic (who he frequently refers to as "Quickster"). It wasn't until after the failed Iron Dominion invasion in New Mobotropolis that, through his magical manipulation, he was finally able to become king — with a little help from Geoffery St. John.

Thanks to his status as a SatAM character rather than a comic-original, he was one of the few (and so far only) major non-video game villains to make it past the reboot. In the new continuity, he's a troll, and Wendy Naugus's brother. His backstory in the new universe reveals that he's now part of a race of trolls that thrived on crystal power. But an unknown event wiped out most of his race and split his civilization into smaller islands. Attempts to revive his civilization were met with many setbacks either from Eggman or Sonic. When Eggman tested his Genesis Wave, he was caught between rifts and lost his powers. He has since then been trying to find a way to re-gain them.

Tropes Applying to Both Versions 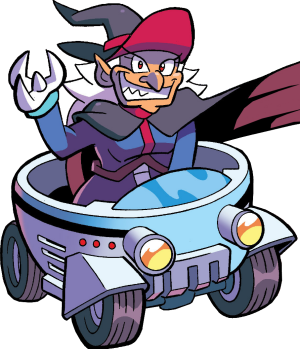 A fellow troll introduced in the new universe as Walter's sister. Though heavily revamped for the comic, she originates from the spin-off game Tails Skypatrol where she was depicted as a (presumably) human witch known only as "Witchcart". 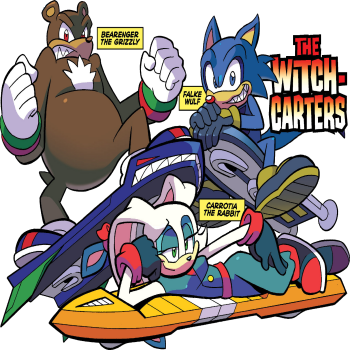 A race of evil hive-minded aliens that consume worlds they pass. Following the Super Genesis Wave, the events of Shadow the Hedgehog have been added to the new timeline. 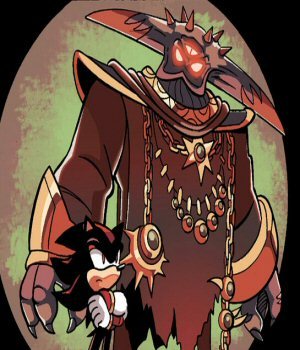 The original Hive-Mind of the Black Arms race. Due to a mandate by SEGA, he was only ever allowed to make shadowy appearances and has now been dead since the Super Genesis Wave added Shadow the Hedgehog's game events to the timeline. 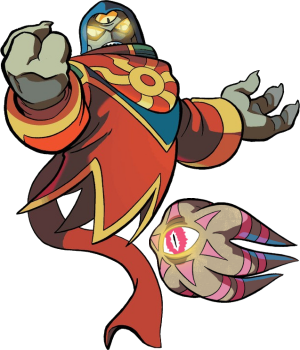 The Black Arms` new Hive-Mind who took over after Shadow killed Black Doom. He plays pretty much the same role as his predecessor did in Shadow the Hedgehog. 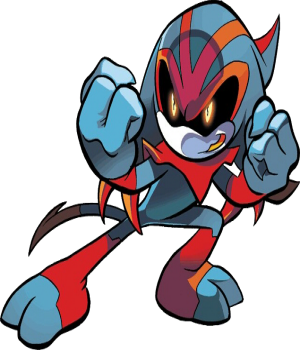 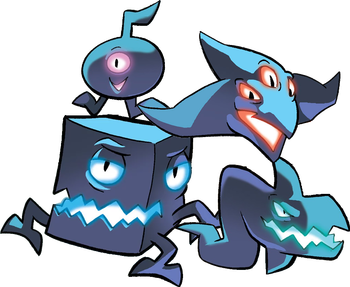 A set of Wisps that were collected by the Black Arms as they passed their world. These Wisps have been corrupted into "Dark Arms" forms, able to meld and add power to Eclipse, much like the Wisps do with Sonic in Sonic Colors and Sonic Lost World. 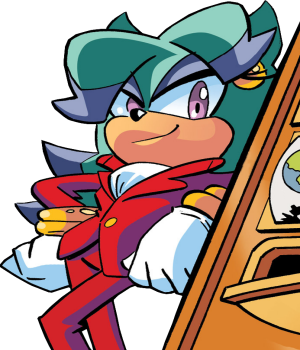 The cunning CEO of Breeze Media, the world's largest entertainment network. She once worked as a double agent for Dr. Eggman, posing as a helpless damsel to gain Sonic's trust. 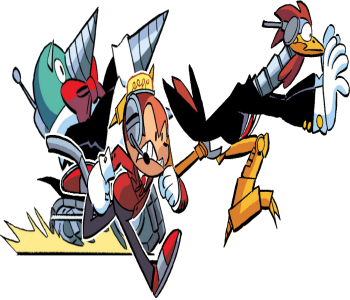 Three Badniks who were part of the original Robotnik's Badnik forces. They were made into their own team that was dedicated to capturing or destroying Sonic, but they were such bumblers that they always failed. Though mainstays in their source, Adventures of Sonic the Hedgehog, Scratch and Grounder only appeared in two early comics before vanishing, with Coconuts getting only two appearances as well (though his second was a while after S&G's). After a long absence they all returned as workers in Mammoth Mogul's casino and headquarters. The three returned in issue #268, with the trio under the employ of the fourth AoStH character, Breezie the Hedgehog.

Pirates of the Setting Dawn

A group of pirates that were once under the command of Abyss. Once she left to join Eggman and took most of her armada with her. This band was the only one who didn't follow and continue to sail the seas looking for treasure.
In General
Captain Shellbreaker 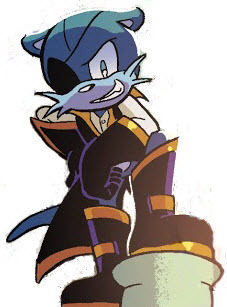 Captain of the Setting Dawn Pirates. An otter.

Mr. Bristles
Second in command of the crew. A yeti crab.
Blade 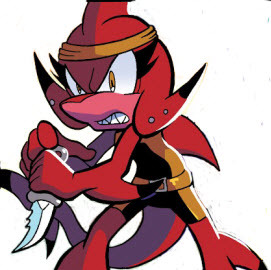 One of the female crewmen of the ship. A shark and Razor's older sister.
Opal 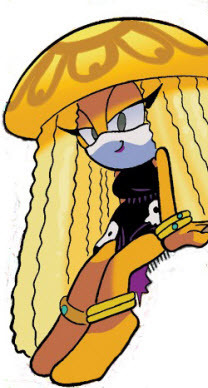 The second female crewman. A jellyfish.

Dive
The youngest member of the crew. A lemming.