Character sheet for Angelic Layer. Please help out! Be careful for spoilers, under WIP

A timid, sweet-tempered, and kind 12-year-old girl who has just moved to Tokyo to live with her aunt. In the manga she is more overreactive and easily excited. She had been living with her grandparents in Wakayama while she went to elementary school, but saved her money so she could afford to go to middle school in Tokyo. She worries about the fact that she is small and unathletic, and is sometimes mistaken for an elementary school student. She sees Angelic Layer as a way to prove that there is nothing wrong with being small. She started playing Angelic Layer after seeing the white angel Athena on a video screen outside of Tokyo Station (she was unaware that she was seeing her own mother's angel). Her angel is Hikaru, and she is known as the "Miracle Rookie". She is nicknamed "Misakichi" by her friend Tamayo.

Misaki's Angel. Though small and lightweight compared to most angels, Hikaru possesses very strong attacks, most which are speed-based. Her small stature makes her aerodynamic, quick, and agile. She was created by Misaki to show others, through Angelic Layer, that there is nothing wrong with being small. Her appearance is a bit tomboyish, since Misaki had accidentally cut her hair short. She has a less mature physique than other angels.

Ichiro Mihara nicknames himself "Icchan" to hide his true identity from Misaki. He is 28 years old and oftens acts eccentric, spontaneous, and immature for his age. He often jumps out of random places, shouting "Icchan go BOOM!", to scare Misaki and Ogata. He is ingenious and dead serious when it comes to Angelic Layer. In the manga, Icchan is the president of the Piffle Company, creators of the Angelic Layer toys. In the anime, Icchan is the "father" and creator of Angelic Layer, having developed the game over seven years with the help of Shuko Suzuhara. Icchan was an employee at a hospital that was trying to treat Shuko's neurological condition. They were developing the angels as part of their research into creating prosthetic limbs which could be controlled by brain waves. When the research funding was cut off, Icchan and Shuko created Angelic Layer in order to help fund further research.

Misaki's aunt and Shuko's younger sister. She is 26 years old. Her hairstyle bears a resemblance to that of Takako Shimizu in Chobits. She demands that Misaki and her friends call her "Miss Shoko"("Shoko-san") instead of "aunt" ("obasan" in Japanese) because she is still "an attractive young newscaster." She often covers Angelic Layer events for the local news station, where she works. Misaki lives with Shoko when she moves to Tokyo.

Misaki's mother and Shoko's elder sister. She is 31 years old. In the anime, it is explained that Shuko left Misaki at the age of five to be taken care of by her grandparents under the guise of work, when in reality she was going to Tokyo to search for a cure her neurological disease. This disease inhibits nerve signals from reaching to or from her legs. Ichiro Mihara was a doctor attempting to work with her to find a cure when the two started Angelic Layer as a way to do research and raise funds. Shuko, or "Shu" as she is called when playing Angelic Layer, is the undisputed champion with her angel Athena, having won the past three national championships. Over the past seven years, she has avoided meeting Misaki, as she is afraid of what Misaki would think of her. In the manga, Shuko has no disease, but is extremely shy about socializing with those she loves. She works for the company behind Angelic Layer.

"Athena's Wings! Open up the future!"

Athena has won the National Games championship in all three years of its existence, and is the undisputed champion of Angelic Layer. She can create powerballs, called Astral Emission, and fly with wings. During their fight, Hikaru learned to do this.

A 5-year-old known in the Angelic Layer world as the "Miracle Kindergartner". She is Misaki's best friend and Angelic Layer mentor. Even at a very young age, she is intelligent, mature, and hard-working. She is an expert at Angelic Layer, often winning her games in mere seconds. She wins all ten of her games at the Tokyo prefecture games, and is the defending champion of the Kantō regional games. She is fiercely competitive, and often works to increase her angel's speed and power. She likes to poke fun at her brother Kotaro for his apparent ineptness when it comes to his crush on Misaki. Hatoko treats Misaki like her student rather than her nee-chan (sister). Hatoko's angel is Suzuka.

"Exceed the speed of light and sound, Suzuka!"

Hatoko's Angel. Suzuka resembles a beautiful and strong ninja, and her 'Rolling Thunder' attack can defeat other angels within seconds. Her strength has led her to compete in the heated National Tournament along with Hikaru. Suzuka's name derives from the fact that she has two suzus on her bow and one hanging from her hair.

A 13-year-old middle school classmate of Misaki, whom he has a crush on, and Hatoko's elder brother. He is always being assaulted by Tamayo and her various martial arts techniques, of which he has been a victim since he was four years old. He becomes jealous of Ohjiro's advances towards Misaki, going so far as to try to attempt to play a quasi-match of Angelic Layer against Ohjiro, despite the fact that he had never played it before. His family owns a karate dojo. Kotaro has practiced karate himself, showing Misaki some of his knowledge in hopes that Misaki can use it to help Hikaru win.

A friend and classmate of Misaki. She nicknames Misaki "Misakichi" and is rather eccentric. One of her favorite activities is practicing her martial arts techniques on her unwilling friend, Kotaro. She always cheers for Misaki at Angelic Layer matches and defends her against those who question her ability. In the anime, it is revealed that Tamayo has always held intimate feelings for Kotaro, while in the manga, she only sees him as a close friend. She offers to be Misaki's "second" in her national game match against the Angelic Layer Company's angel when Hatoko is ill. Misaki accepts Ohjiro's offer instead.

Icchan's younger step-brother. He has been involved with Angelic Layer for many years, in large part because it was what brought him and Icchan together after their parents married. Ohjiro competes in Kobe, and was the champion of the Kansai Regional games, as well as being the runner-up in the national tournament for two consecutive years.In the manga he is reassuringly asking what color are Misaki panties then running away. He has a desperate desire to defeat Shuko Suzuhara's angel, Athena, to get over a childhood crush he had on her. His angel is Wizard. In the anime, he falls in love with Misaki.

Ohjiro's Angel. Wizard is the Kansai Regional champion, and was the runner up in the National Games for two consecutive years. Wizard uses a technique called “Magic Guard” to block his opponent’s attacks with an electric shield that uses static electricity. Misaki neutralized the shield by using one of Hikaru's cables as an earth contact to the layer. Wizard is one of the few male angels in the Layer.

Arisu is a talented angel builder who aids her sister in creating angels. She follows in her sister's steps as a talented Kung Fu artist, and creates strong and agile angels. Arisu does not make angels for herself. Arisu designed Mao and Unpyo to be stronger than Suzuka, but Unpyo loses to Suzuka in record time, which mortifies her and her sister. After sabotaging Hikaru with a transmitter, Arisu is caught by Ohjiro Mihara. She is told that Angelic Layer is meant to show true talent and that anyone can be brilliant; she is forced to give up cheating to win. She is very sensitive about the angels she builds, and accuses her sister of not liking the angels she made after their loss to Hikaru. Arisu creates a balance-oriented angel called Arisu for herself near the end of the anime, and vows to beat Hikaru in a friendly battle. In the last episode, Arisu is shown fighting the angel Queen with Alice. She has a crush on Ohjiro Mihara, calling him "Ohijiro-sama", and asking for his autograph. She later decides she hates him after losing against Hikaru and Misaki. Arisu's name is translated in the Japanese anime credits as "Alice". 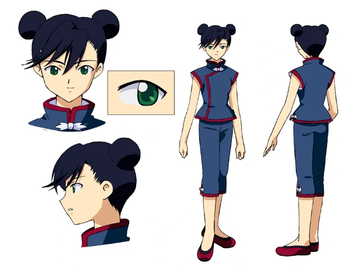 Arisu's older sister, originally introduced as the Deus of Mao. She's known as a kung fu master in addition to being a Deus. 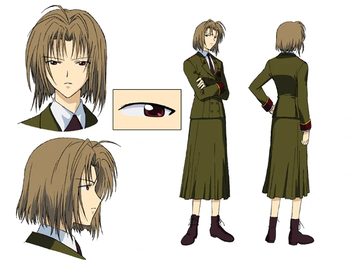 Known as the "Ice Machine," started playing Angelic Layer at the request of her terminally ill sister, Rin. Rin designed what the angel would look like, but died before Sai could create her. Sai states that her reason for playing Angelic Layer is "to become strong." Sai is from Kanagawa Prefecture and was the runner-up in the Kantō Regional games the past year. She is friends with Kaede, who went to the same middle school as Sai. Her angel is Shirahime. 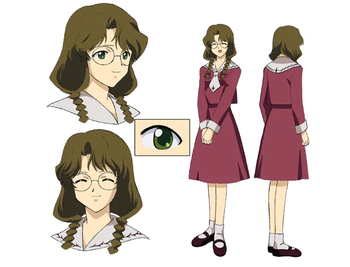 Kaede is a quiet and wise girl with glasses from Kanagawa. She is friends with Sai Jounouchi. Her parents are divorced, and she lives with her father. She received an angel egg as a gift from someone in her father's company. She is known as the 'girl with a healing smile'. It is revealed in Chobits that she is Minoru Kokubunji's sister, and that she has died in the few years since Angelic Layer.