The creator of the Angel Zone and the overseer of the whole thing.
Advertisement:
Andrew "Andy" Landon / The Mechanic

A college student and mechanic who Dr. Ametsuchi hired as her mechanic. He agreed in the hopes of finding his missing brother.
Automaton

An eccentric human doctor who believes he's not human.
Kit Klepto / The Thief

A nature mage and accomplished thief who took a job with Dr. Ametsuchi to keep an eye on the contestants.
Ko-Reko

A trickster whose mind was twisted and warped by the forces of chaos and probability.
Advertisement:
Kyuu

A kitsune who acts as the seer of the tournament. Dr. Ametsuchi built his current body in exchange for his fortune telling services.
Percy

One of the three fates and a wendigo. Despite being incredibly powerful, they are also incredibly lazy. Dr. Ametsuchi keeps him around to study his powers over fate.
Pox

A kitsune and the son of Kyuu.
Advertisement: 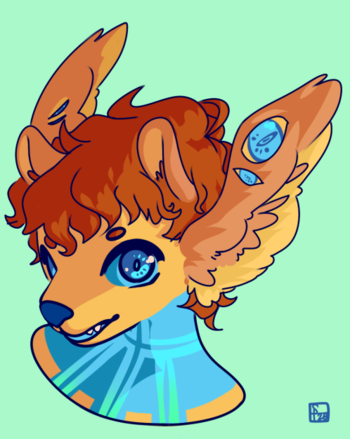 Once the crown prince to a powerful race of magical creatures, Casimir seems to have a lot of baggage on his shoulders. He has no survival skills to speak of, little to no social skills that aren’t shmoozing royalty and to top it all off a lot of very important people to him are dead.
Commander

A humanoid robot with a floating mask for a head. Gordon started off as one of a line of the mass produced Gilgamesh model itzals, with no personality or free will. He eventually gained both, and went on to become a famous engineer and a ferocious fighter. He was led to believe that the Angel Zone was just an alternate universe to study, and is unaware of the tournament at large.

An orphaned Lightspawn who grew up in the slums of her home city. She spent most of her early life fighting off gangs, monsters, and the local authorities only to be found by Gordon when he was in the city for unrelated reasons. She now serves as his apprentice, and entered the tournament to prove to him that she is worthy of being his apprentice.
Izz

A lonely android originally built to oversee a small supply depot on the outer rim of a distant solar system. After a couple centuries of a rather monotonous and unfulfilling existence, he joined the Angel Zone tournament to have a chance to make new friends, see new places, and obtain a better life.
Jill and Allen

Two friends who have stumbled into the tournament thanks to Jill’s impulsive behavior. To Allen, this was all one big mistake, and they need to return home as soon as possible.

However, fate has other plans...

A very strange girl who's hobbies include wiping the floor with her enemies and hugging every creature she sees (sometimes doing both within the same fight). She is energetic and impulsive, and exhibits bizarre mannerisms and a questionable sense of logic. As it's currently known, Jill's goals for this tournament are to help Allen and find more cute critters to try to bring home.

A timid but technologically gifted teenager. Allen tends to avoid combat whenever possible, but if a fight is inevitable, his Weapon of Choice is his multi-purpose wrench, Myria. Otherwise, he usually just distracts enemies and lets Jill handle them. He has a past that is known only to him; one that he could change if fate is in his favor.
Kazh-Arah and Noctus

A force of chaos born from Pandora's Box, Konfusion cast aside her godliness in favor of the fun a physical body would provide. Since then, she wanders the worlds and laughs in the face of the fourth wall.
Kyle Warren and Pestle

Maurice is a magical knight, a member of an organization protecting mundane people from supernatural threats. His strong suit is defensive magic, and he will not let you hurt anyone under his protection.
Misha

An extremely powerful and very tall hobo with a sword.
The Phoenix

A strange little creature that resembles some sort of black bird.
Seth and Rin

"There was once a moment I recall of two siblings. Pure opposites yet fond of each other’s company.
The two once served as high-ranking servants in summary. Serving Songbirds, divine and glorious beings.
However.
The brothers fell, disconnected due to their catalyst...
Interaction. Mercy.
They were cast from the stars above to languish for all eternity.
Nevertheless, it did not stop there.
One sought for a return back to the stars above.
The other latched onto his newfound free-" - Narrator

Two brothers, Novus and Stephan were once high-ranking creations of celestial beings known as Songbirds. Due to a sudden complication during a mission, the brothers were cast away from the stars above. Now, Novus looks for a way to change his Fall. On the other hand, Stephan enjoys the luxuries without chains. 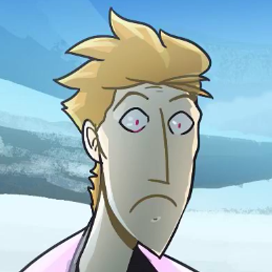 The Sword of Forces

"I wasn’t even trying to kill you yet."

Once dubbed The Sword of Forces, Stephan was a brutal annihilator for celestial beings. With the happening of a sudden mishap, he fell due to the catalyst of Mercy. Stephan comes off as the sociable one between the twins. He sees his Fall as an opportunity to seek the pleasures of the mortal existence. 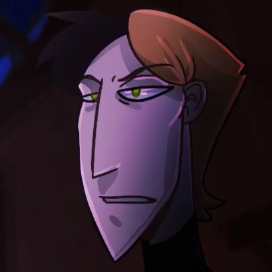 The Left Eye of Intelligence

"If we want to ascend to our mothers’ arms… we should not indulge our stay."

The serious and silent one between the twins. Novus had one purpose which was to observe and collect information, thus titled The Left Eye of Intelligence. He believes his Fall's catalyst, Interaction, was a simple mistake. Being stranded in a desert prison, Novus wishes to find a way to change his Fall.