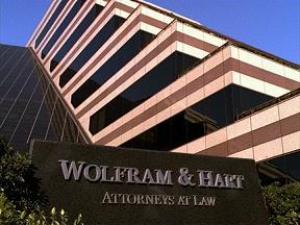 A powerful international and interdimensional law firm. Wolfram & Hart, and its many incarnations in other dimensions, was actually a front organization for the Wolf, Ram and Hart, an ancient cabal of demons known euphemistically as the "Senior Partners" who worked through their powerful principal agents—the Circle of the Black Thorn.

Wolfram & Hart branches, such as the Los Angeles branch, were created over unconsecrated ground. As of 2004, the firm had branches in every major city in the world, as well as satellite offices in many areas of the world where they helped spread oppression and evil.

The Circle of the Black Thorn

The Circle of the Black Thorn

The agents of the Senior Partners on Earth, the Circle are their direct representatives and thus perhaps singularly the most powerful evil force on the planet. Only the most vile of creatures are accepted into their ranks; given the firm's interest in having Angel on their side of the apocalypse, seeing him corrupted enough to be worthy of the Circle is a fond wish. Individual members appear throughout the fifth series, though it is not until near the end that their commonality is actually revealed ahead of the final confrontation. 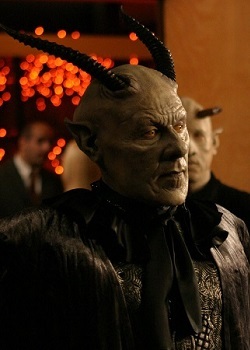 "Yes. Fine. Sycophants, worms. Don't writhe all at once."
Played By: Leland Crooke

A powerful and feared demon of an unidentified species and a member of the Circle of the Black Thorn. 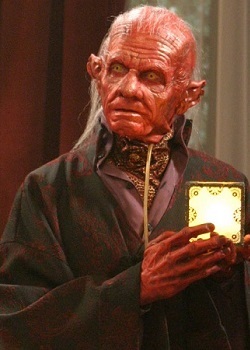 "Now, then, let me show you what a real wizard can do."
Played By: Dennis Christopher

A demon and a powerful sorcerer, not to mention a member of the Circle of the Black Thorn. Despite his frail and elderly appearance, he proves to be a formidable enemy of Team Angel.

A California Senator, client of the law firm Wolfram & Hart and, secretly, a member of the Circle of the Black Thorn and a demon.

Ed, Leader of the Fell Brethren

The Grand Potentate of the Fell Brethren and a member of the Circle of the Black Thorn. As a symbol of his status, he wore a more ornate version of the jewels worn by his brethren.

Connections to the Senior Partners

The Conduit to the Senior Partners

Played By: Kay Panabaker & J. August Richards
"I like trouble. But I hate chaos." — Mesektet
"I am not your friend. I am not your flunky. I am your Conduit to the Senior Partners." — The Big Cat in Gunn's form

A position filled by evil being of enormous power that serves as a Mouth of Sauron to the Senior Partners. The first Conduit was Mesektet, one of the Ra-Tet (a family of avatars of the god Ra). The second Conduit was an unnamed being. 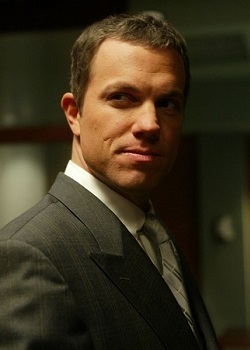 "It's a business, boys. Not a Batcave."
Played By: Adam Baldwin
"Let me say this as clearly as I can. You cannot beat me. I am a part of them. The Wolf, Ram, and Hart. Their strength flows through my veins. My blood is filled with their ancient power."

The replacement liaison for Eve following her collusion with Lindsay to kill Angel — a big no-no as far as the the Senior Partners are concerned. Like Eve, Hamilton shares a direct line with the Partners, though he is vastly more powerful. 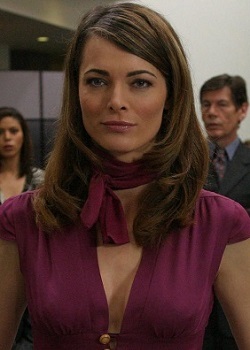 "I don't do errands. Unless they're evil errands."
Played By: Stephanie Romanov
"Funny thing about black and white, you mix it together and you get grey. And it doesn't matter how much white you try and put back in, you're never gonna get anything but grey."

Another Wolfram & Hart lawyer, she is the rival of Lindsey, the two often vying with each other internally, when they're not trying to make Angel's life miserable. After Lindsey's departure, she begins to climb up the ladder at W&H, bringing her into conflict with Angel time and time again. 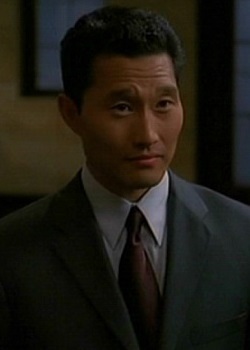 "I'm fighting Angel in my own way."
Played By: Daniel Dae Kim 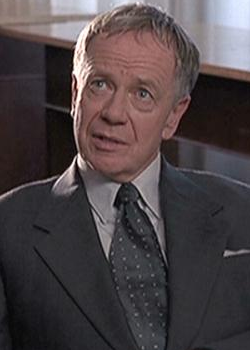 "Actually, the world isn't that complicated: it's designed for those who know how to use it."
Played By: Sam Anderson
"See, for us, there is no fight. Which is why winning doesn't enter into it. We go on, no matter what. Our firm has always been here on Earth... in one form or another. The Inquisition. The Khmer Rouge. We were there when the very first cave man clubbed his neighbor on the head with a rock for stealing his dinner. See, we're in the hearts and minds of every single living being. And that, friend, is what's making things so difficult for you. You see, the world doesn't work in spite of evil, Angel. It works with us. It works because of us."

A high-ranking executive at Wolfram & Hart, later promoted to head of its Special Projects Division, i.e. the "Screwing With Angel's Head and other apocalyptic plans" division. Holland's not the last to hold this office, given its high turnover rate. 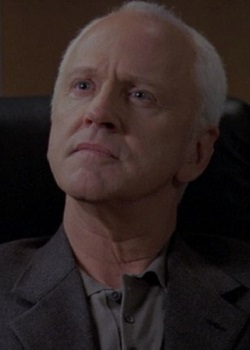 "Lilah, this is my corner of the sky. I decide when the sun rises and when it sets."
Played By: John Rubinstein
"This is outrageous! Are you actually telling me that you went over my head?"

A lawyer at Wolfram & Hart and President of the Special Projects Division.

A veteran lawyer at Wolfram & Hart, he was in charge of the Special Projects Reevaluation.

Played By: Thomas Burr
"It's my ass on the line here. I don't want you to make me look bad."

A lawyer at Wolfram & Hart who, alongside Lindsey McDonald and Lilah Morgan, worked under the supervision of Holland Manners.

Played By: Caroel Raphaelle Davis
'Appears In: "The Girl in Question"

The CEO of Wolfram and Hart's branch office in Rome. 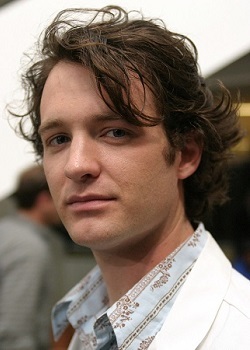 "You think I'd have my God hatched out of some schmuck?"
Played By: Jonathan M. Woodward

A scientist at Wolfram & Hart who turned out to be a worshipper of Illyria.

An employee at Wolfram & Hart as well as a former wrestler and Champion. Alongside his four brothers, he was one of the Hermanos Número, until they were killed and he joined Wolfram and Hart after losing all hope. Decades later he is an elderly and bitter mail room employee.

Played By: Stephanie Courtney
Appears In: "Dad"
An employee at Wolfram & Hart who was charge of the firm's Files and Records, in fact she seemed to be Files and Records personified, as she had access to every file and reference in the firm.
Cyril

A Wolfram & Hart employee who worked at the mailroom. He was also a servant of Master Tarfall, Underlord of Pain.

A cryptozoologist and an employee of Wolfram & Hart at the Research and Intelligence Department.

Played By: Christopher Leps
Appears In: "Quickening"
One of the firm's assassins.
Lilah’s Translator

Played By: Jim Ortleib
Appears In: "Lullaby"
The man who helps the firm translate ancient scrolls.
Young Man in Fez

Played By: Kal Penn
Appears In: "That Vision Thing"

A psychic used by Lilah to hack into Cordelia's visions, with life-threatening side effects.

Played By: Justin Shilton
"I have never hurt a woman in my life...I just like to watch."

While appearing to be a normal young man, he was actually a half-demon with contagious, vicious misogyny, and had the power to turn any man he touched or who came in contact with his bodily fluids extremely savage and brutal toward anyone female. And he had no real reason to do this, other than his personal amusement.

Played By: Vyto Ruginis
Appears In: "City of..." 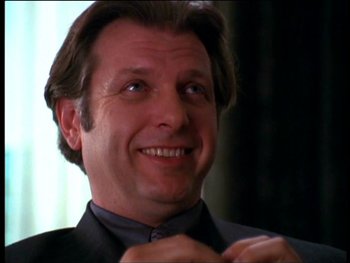 An old and wealthy vampire who owned the investment firm Russell Winters Enterprises. A client of Wolfram & Hart, his vast wealth made him one of the most powerful men in Los Angeles, living among humans and using his connections and power to kill with impunity.
Meltzer 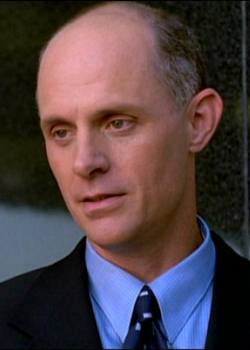 "I'm more than meets the eye."
Played By: Andy Umberger
Appears In: "I Fall to Pieces"

A brilliant surgeon with the power to sever and reattach his body parts, over which he had some sort of telekinetic control (he could levitate them in the air) thanks to his mastery of psychic surgery after being inspired by a book about how everyone was connected to the world around them due to them sharing molecules. He was also a deranged stalker and a client of Wolfram & Hart, fixating on Melissa Burns after he saved her sight in an operation and they shared a single drink with her, watching her in her apartment by leaving an eye in the area.

Played By: John Capodice
Appears In: "Sense and Sensitivity"

A dangerous crime boss of Los Angeles, and a former client of Wolfram & Hart until he attempted to murder Kate Lockley in a room full of witnesses.

A blind assassin working for Wolfram & Hart as well as their client.

A client of Wolfram & Hart, both a businessman and a dangerous mobster.

A rich and powerful member of the Los Angeles elite as well as a powerful Necromancer. He provided demons with dead human bodies to inhabit, using himself as a conduit to "install" them.

An unidentified demon torturer at the Senior Partners' Holding Dimension. He would ritualistically and repeatedly cut out the heart of the human prisoner. Illyria took the necklace that identified the prisoner and placed it around his neck, forcing him to cut out his own heart until another prisoner took his place.

A doctor and scientist that performed certain services to Wolfram & Hart and other extremely wealthy clients. The procedures that he performed included implanting knowledge into people's minds, brainwashing, and giving people x-ray vision. 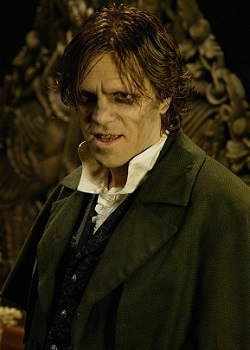 "An eternity of suffering for your sins. But first, I get to play. Let's get started then, shall we?"
Played By: Simon Templeman
Appears In: "Hell Bound"

A multiple murderer that managed, through a Deal with the Devil, to delay his own journey to hell through torturing the damned. For the early parts of Season 5, he's responsible for Spike's being dragged to hell. 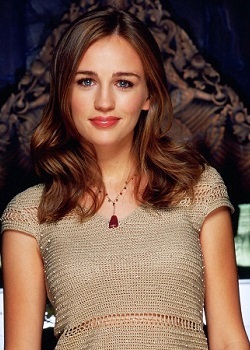 "Hey, I can't be held responsible for how you dress me in your fantasies."
Played By: Sarah Thompson

The first "liaison" to the Senior Partners assigned to Angel. Later revealed to be a child of the Wolf, Ram, and Hart, created to do their bidding. 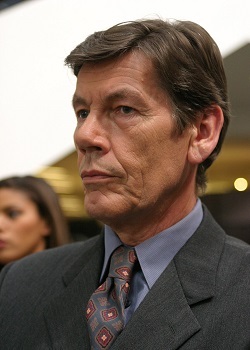 A former member of the Watchers' Council, Rutherford Sirk lacked the moral clarity of other Watchers of his generation and found himself doubting about the good fight and the Council's mission, though he was far from the only Watcher corrupted by the knowledge he obtained at the Council.

Tempted by power and ambition, Sirk joined Wolfram & Hart and took along with him several valuable tomes belonging to the Council, including the Devandiré Sybilline Codex.