A teenaged serial killer who is obsessed with blood, she runs with the Rocket Racers while Izuku is busy training to get into U.A. She becomes infatuated with Peter while seeing him bloody and beaten during the live broadcast of the Prowler incident. 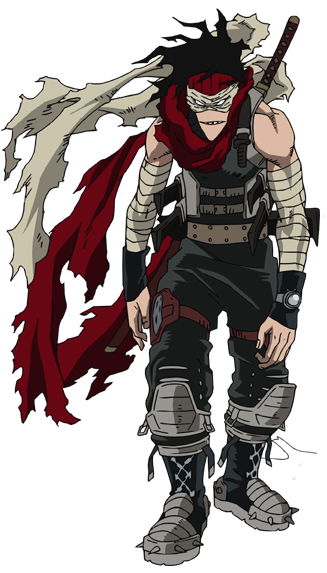 The infamous "Hero Killer" who targets Heroes he deems to be "Fakes" in hopes of creating a world where there are only purely selfless heroes like All Might. His Quirk, "Bloodcurdle", allows him to paralyze people by consuming their blood, with the amount of time spent paralyzed varying based on blood type.

Quirk: Quirkless (is a machine)

Intended to be the ultimate mobile supercomputer capable of answering almost any question, the Living Brain became a tool for criminals and a headache to Peter Parker at various points in his career. It reappears again in Izuku’s universe after the Prowler uploads its operating system into U.A’s database under All For One’s orders so that it can assist Shigaraki. 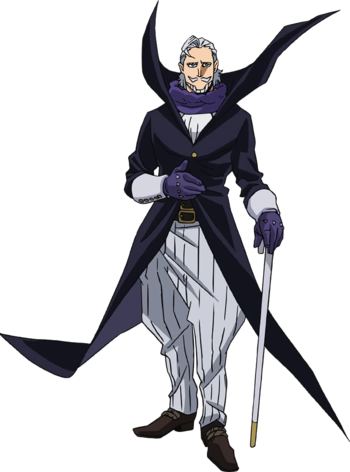 A 32-year-old man with a desire to carve his name into history. He performs crimes for the sake of drawing heroes to him so he can put on performances that are put online for the world to see. His Quirk is "Elasticity", which grants elasticity to anything he touches. 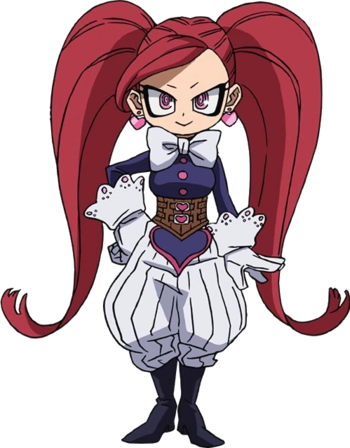 A young woman who is Gentle's greatest (and possibly only) fan. As a Villain she acts as his sidekick and camerawoman, code-named La Brava. Her Quirk is "Love", which grants an exponential increase in power to the ones she loves and further increases said boost depending on how strong her feelings at the moment are.

A gang of aspiring Villains riding around on rocket-powered vehicles. They're among the many upshot Villains who are taking inspiration from Marvel rogues with the tech they acquired from Mysterio. They're tearing up the streets of Musutafu while Izuku is busy training to get into U.A.

A group of Villains who used the equipment of Abner Jenkins

. They're brutally murdered by the Enforcers after failing to pay their dues.

Debut: Issue #16: The Coming of The League of Villains!

A pair of Villain siblings who are gold-star members of the Power Broker app. On loan from Mysterio to Tomura, the two quickly gain his ire thanks to Kangaroo's psychopathic and childish behavior while her brother feebly tries to keep her in check. Knowing that Mysterio has a bounty on Spider-Man, Kangaroo decides she's going to be the one to put an end to him but not before "playing" with him.

The original Hobgoblin. He seemed to turn over a new leaf after the Inversion crisis, starting the Kingsley Corporation to support superheroes. In actuality, he's hoping to control both superheroes and supervillains from the shadows to make a massive profit.

Roderick's younger brother and minion. He has been under his brother's thumb their entire lives and lives in terror of him, but wants to stand out in his own right one day.

Ben Urich's nephew and an ex-superhero. He moves in to fill the void of Peter's absence in Mayday's life after Peter goes missing, but wants to be something more than a mere friend to the Parkers..

The mysterious and feared hitman of Roderick Kingsley. Armed with a teleportation belt, he solves problems that arise in his boss’ carefully constructed con and assists Roderick’s collaborators. Mayday encounters him while he’s in the middle of helping the Demons corner and kill a Maggia member who went against his family’s promise to stay out of New York.

An amoral and cruel eugenicist and regular foe of the X-Men. Mr. Sinister constantly battled the mutant superhero group due to his belief in genetic perfection, regularly producing clones and conducting cruel human experimentation. Believed to be dead by the general population, Sinister was instead put to work on Krakoa to advance their genetic advantage over other countries. Unfortunately, they do not realize that he has circumvented their hold over him and now regularly works with Quentin Beck to experiment on humans, Mutants, and Quirk users.

Miles Morales' uncle and one of Roderick Kingsley's top agents. A thief and mercenary by trade who will stop at nothing to get what he is after. Despite being estranged from his brother, he maintains a close relationship to his nephew. When Jefferson is injured by the explosion caused by Phil's glider, he makes it his personal mission to make the new Hobgoblin pay.