The unfortunate passengers of All Aboard, and their charismatic conductor. 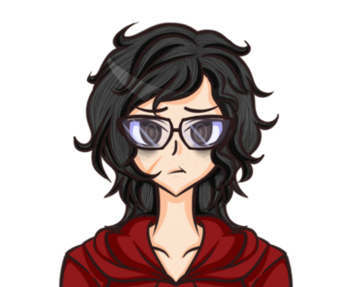 The SHSL Conspiracy Theorist, Airi Ayame is known for her work in the field of conspiracy theories, although Airi’s theories are usually considered baseless facts that lead to nothing more than speculation... or do they? See for yourself: her most notable theories you’ll find making online rounds are The Alienware Meteorite Coverup, and Apple’s Brainwashing iPhones. Both theories have several pages of evidence linked to them, and are all written by the nineteen year old student who continues to publish more of these articles on a daily basis. Everything from secret backdoor deals to the coverup of an entire small town being decimated by a meteor that has at least some kind of message from a civilization beyond the stars, can all be found on her personal blog. Strangely, not much is actually known about the girl behind them though...

Survives the killing game, and escaped the metro. 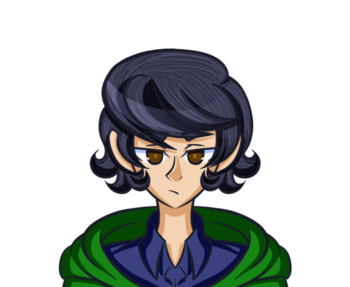 Akira Saitou is a Japanese high school student currently attending Hope's Peak Academy's Reserve Course. He has not accomplished anything remarkable enough to be accepted into the Talent Course. However, he is currently the vice president of the reserve course's Newspaper Club, and is one of the main photographers of the Reserve Hope Shimbun, created by the aforementioned Newspaper Club.

The Chapter 5 killer, and the mastermind of the killing game. He is executed at the end of the trial. 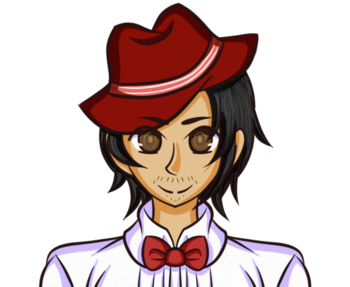 Alastair Matthews is an English magician and the SHSL Street Magician. Having come from a working class background, he initially began busking simply to earn money for his orphanage, although his performances attracted a larger crowd than he had expected. Since then, he has become a local celebrity in the borough of Camden, regularly bringing in large crowds with his act.

The second killer of Chapter 3, who was able to get away with his murder and escape. 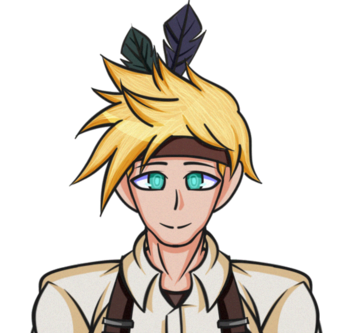 Billy McCoy was originally conceived in America by American parents, but ended up being born in Japan due to his dad, who was in the military, being stationed there. He was home schooled for a little while, but ended up working at a construction sight with his brother thanks to his step dad (under extreme supervision from the company, of course). One thing Billy and his brother always did since they were little was whittle together. Even with just a plain pocket knife, Billy was incredible at making wood carvings. It wasn't until he was 13 that he could fully enhance and prosper in his skills with wood carving after an accident that happened.

Survives the killing game, and escapes the metro. 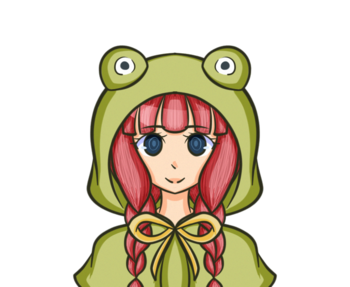 The first killer and second victim of Chapter 3, dying from blood loss from a head wound from Oliver after killing Tora. 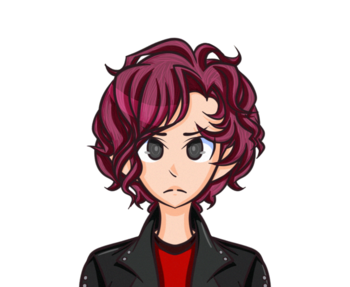 Hokori Tatsuki is a Pyrotechnic, which means that she specializes in fire designs. She is 19 years old right now and her birthday is November 2nd. Don’t get too close to her or else she might blow up. Get it, blow up? Anyway, her homelife is mysterious and if you try to talk to her she’ll push you away. She currently favors fire over any human being. She enjoys fires and firework designs. She dislikes social events and friends.

The victim of Chapter 2. She was killed when Shizuhiko called the train to run her over. 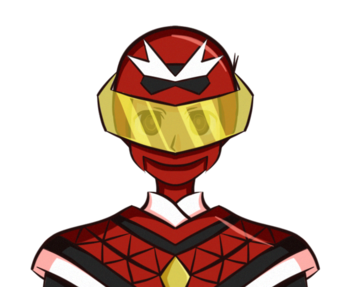 Some might know Kanpei Takasugi better as Visor Red, the very first of the Visormen at Matsushina Junior High. What began with the unexpected arrival of a single Super Sentai-like figure furiously cleaning up the school (literally and figuratively) ballooned into a whole squad of bodysuit-wearing students representing the student body. Visor Red's influence on Mastushina Junior High left the public school a transformed place, and today the Visormen serve as faceless representatives for different groups among the students. While their form of student council was never elected, the Visormen exert an unprecedented level of influence over the school in a non-threatening way that supports the institution itself. Visor Red unmasked himself at the end of his time at Matsushina Junior High, revealing himself to be Kanpei Takasugi and welcoming a new Visorman in to take his place as he went on to high school.

The killer of Chapter 1, and executed for killing Suga. 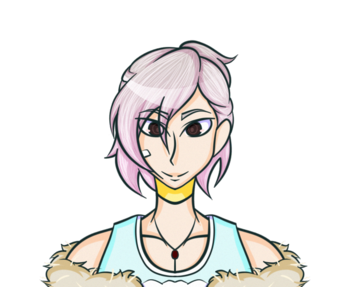 Suga (born in Tokyo, Japan, May 27th) is the only son of bankers Daisuke and Kanon Suga, and a well known mathematician. He was put into advanced programs for prodigies from age six onwards, and has since then gone on to make contributions to the study of mathematics, focusing especially on pure, abstract mathematics, rather than applied. He has won youth competitions catered towards mathematics on both a national and international level, and is today seen as one of the most promising young scientists nationwide. Non academics may know him as the reigning champion of the latest season of late night quiz show “Problematic Super Brain”, a competition based on puzzles and riddles, which he is slated to return on next year. The university of Tokyo has expressed interest in granting Suga a scholarship after he debuted as a guest lecturer on the topic of calculus at age thirteen, but despite his acclaim that topic remains hotly debated. The issue at hand appears to be related to a number of reports on his blog detailing Suga’s apparent love for the nightlife of Harajuku, reports the staff deems as not befitting behaviour for a scholarship student. Suga himself has not commented on the issue. Said blog, ❀~Gōkana Troublemaker~❀, mostly consists of fashion related topics, pictures of street fashion and updates on events and locations, usually based around Harajuku. It has a reputation as being a good source on the matter by people interested in street fashion, but remains widely unknown outside of those specific circles.

The victim of Chapter 1. He was killed when Kanpei shot him in the gut. 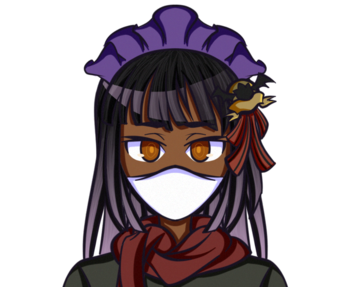 Kuroneko has exploded onto the film scene recently as their most recent movie hit theaters. This up-and-coming monster designer is well known for their ghastly creations in several high-profile movies in the last year, with some famous examples including: the Phasebrute (At Midnight They Maim), the Nethermorph (Monsters Undertaker), The Sorrow Beast (Waxwork’s Revenge), and the Dawnseeker (Skylights). Not much is known about them as a person, however; they rarely come into the spotlight and seem to keep to themselves. Kuroneko is not their real name, and the film company won’t share what it is. Nevertheless, their skills at designing otherworldly monstrosities are unmatched. They’re currently rumored to be working on a new movie, but no information has been released.

The first victim of Chapter 4, killed by being stabbed by Takumi. 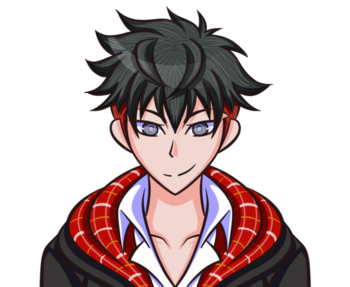 Quinn Yap is known as the youngest member in the business of murder mystery entertainment to date, on a professional level. His main headquarters of operation, “Fine Blood Wine: Dinner and Mystery Parlor”, is hosted in Rapid City, South Dakota, U.S.A. He also has been in other theatrical performances, and hosted a television show for celebrities to try to solve his murder mysteries. Quinn is seventeen years old, having started his business back when he was thirteen years old. His birthday is October 29.

Mysteriously disappears before Chapter 2's motive. He returns in Chaper 4, only to become the second victim from poisoning an hour after from Takumi accidentally activating a trap. 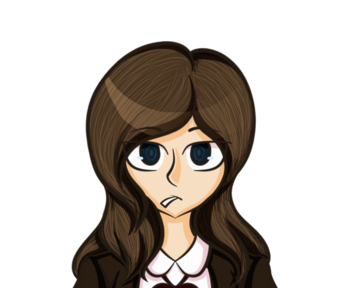 Setsuko Shiwa is a 16 year old internet critic who covers many topics in mainstream media with no real focus in one area aside from food and fashion, which she does not cover. Setsuko has been in the critic business for 1 year, starting when she was only 15. Her style of critiquing when it comes to movies and games is reminiscent of the YouTube channel Jontron, and she uploads to sites like VidMe, NicoNicoDouga, and YouTube. When it comes to art and music, they are written. She has gone to a few cons over the past year, having hosted a couple panels. Her upload schedule is once every two weeks, with no day she specifically uploads on. She doesn't make money off of her critiques despite them getting a lot of attention.

Survives the killing game, and escapes the metro. 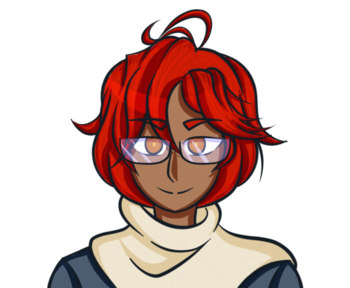 When it comes to mycology, Shizuhiko Omori knows what he’s doing. The young man has been known to study and grow a variety of mushrooms. Owning an indoor farm where he grows them to sell and even a terrarium that he carries around everywhere, Shizuhiko has extensive knowledge on these odd fruit and will be more than happy to share any of it.

The killer of Chapter 2, and executed for killing Horoki. 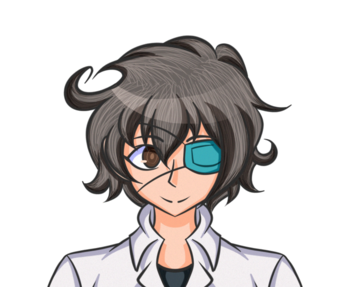 Everyone likes sweets, right? Well, most people do. But even most people probably don't know about the delicate art that Sugar Sculpting is - fusing candy and shaping it in various forms- of which Takumi Amai is a practitioner, specializing in the art of sugar pulling. Always having strived for perfection, their determination unwavering even when they had to retire from a big contest, their efforts have been rewarded: not only can they claim the first place of many other competitions, but their online shop has a lot of orders daily- and not to mention, their biggest reward: admittance into Hope’s Peak Academy, as the Super High School Level Sugar Sculptor!

The killer of Chapter 4, and executed by Jenova after accidentally killing Kuroneko and Quinn. 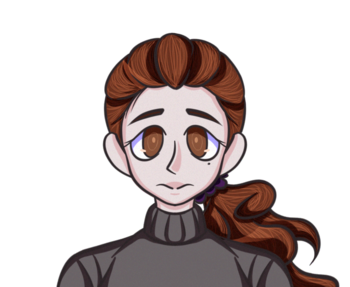 Born into a working class family, nobody would have suspected that Talia Newton would come to be renowned by philosophers over three times her age. Her philosophical writings have been printed in over 60 countries and she is considered the Socrates of our time. Despite this praise, she is very modest and rarely makes appearances in person, preferring to keep to herself.

Survives the killing game and escapes the metro. 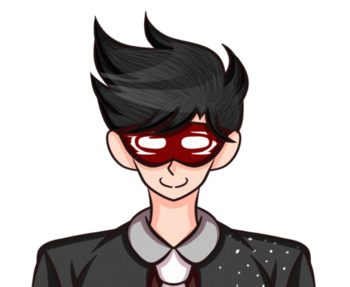 Yami Tora joined the ranks of Hope’s Peak Academy as the Super High School Level Occultist. He’s traveled the world ever since a young age, due to his upbringing as the son of an archaeologist. He has a particular interest in collecting 'haunted’ items, or items with strong spiritual connections, and even has a massive collection of artifacts and trinkets that would make a paranormal investigator crawl right out of their skin. According to his parents, the reason he wears his iconic blindfold over his eyes, is due to a pack of dogs that attacked him while he was a kid. Tora often boasts about his 'prized possession’, even going as far as carrying it around on his back at all times, though no one as of yet has seen what this object is.

The first victim of Chapter 3, dying due to being drowned by Choharu. 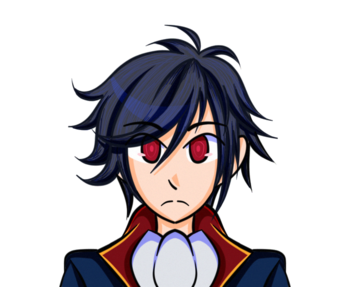 The family name of Richelieu is not just famous around the dancing community, but also around the world. Striking in with their fancy suits and masquerade masks, these elegant dancers were raised under the same roof, merged into different models. One of them is Zean Anthony Richelieu, a seventeen-year old man with big dreams. Raised by his father and taught by his aunt, the adolescent male escaped the family boundaries and went on to study the trickiest kind of dance, folk dance. Folk dancing isn’t very much common to France so he went on to study Filipino Folk Dance, which was where his Aunt grew up in. Unlike any other folk dance, Filipino Folk Dance showed more meaning into it. Each step represented a part of a story that came with the dance, which what got Zean intrigued with it. However, he did not do this alone. He is a member of the Folk Dance group named "Pas Des Tous", which grew fame and gave popularity back into Folk Dancing to the Filipino culture.

Although he didn't kill anyone, he was executed due to a mistrial in Chapter 3.

The victim of Chapter 5. His killer was Akira, the mastermind of the killing game.