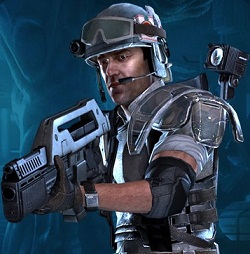 A member of the U.S.S. Sephora's 118th Battalion, Winter is part of the search-and-rescue team sent to investigate the U.S.S. Sulaco in the main game. He acts as the Player Character for the entirety of the main campaign. 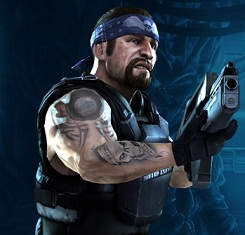 A Smartgun operator who often works alongside Winter.
Bella 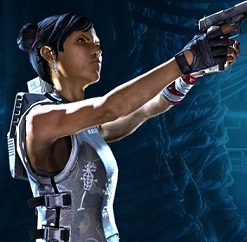 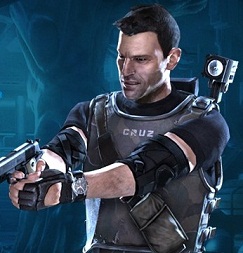 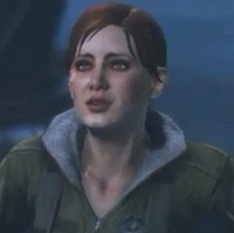 A dropship pilot for the Sephora.
Keyes 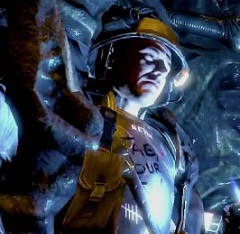 A Marine onboard the U.S.S. Sephora, who was captured early on during an incursion on the Sulaco, and has to be helped by Winter.

A Hyoerdyne Systems model 341-B android assigned to the U.S.S. Sephora, Bishop is stationed with other Colonial Marines on the ship, and is evacuated with Cruz, Winter, O'Neal and Bella on Reid's dropship to LV-426 after the two starships are destroyed. He takes on a greater role later in the game to help the rest of the Marines.

A mysterious prisoner that Winter and O'Neal are tasked with rescuing during the main campaign, who has some surprising revelations about what happened 17 weeks earlier on LV-426...

One of the executive officers within the Weyland-Yutani corporation, he oversees much of the Company's bio-weapons division, and is responsible for the operation of the Origin Facility built on LV-426. He appears in both the main game and the Stasis Interrupted DLC.

Appears in the Stasis Interrupted DLC. A scientist working for Weyland-Yutani, Levy ultimately betrays them to help a certain prisoner escape, and decides to aid in his quest to broadcast a Distress Call and destroy a hidden hive located on the surface of LV-426. Becomes the Player Character in the second half of the DLC.

The Player Character of the Stasis Interrupted DLC. A colonist onboard the U.S.S. Legato, Lisbeth is roused out of cryosleep and discovers that enemy forces have invaded the ship, and that xenomorphs are also involved. Banding together with a small group of survivors, she works to fight her way off the ship.

Appears in the Stasis Interrupted DLC. A former Colonial Marine turned colonist, Stone is onboard the U.S.S. Legato when it is captured by Weyland-Yutani commandoes, who use it as a breeding ground for xenomorphs. Stone eventually works to escape while helping several key figures throughout the Legato and Sulaco.

Appears in the Stasis Interrupted DLC. A colonist onboard the Legato, Turk aids Stone and Lisbeth on their quest to escape after it's besieged by Weyland-Yutani forces.