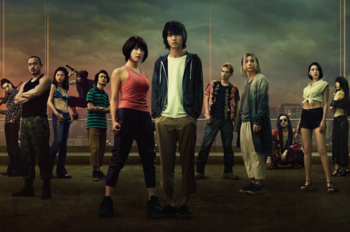 The protagonist of the story. He enters the Borderland along with Karube and Chota when he hangs out with them one night. He is very skilled at deduction and usually is the one to figure out the design behind each of the games.

One of Arisu’s best friends from the "real world". He worked as a bartender before entering the Borderland. He ultimately dies from losing in 7♥ Hide and Seek.

Arisu’s other best friend who was also brought into Borderland. He ultimately dies from losing in 7♥ Hide and Seek.

A determined woman and the first person Arisu and his friends meet within Borderland. She worked at a company and was recently given a promotion. She ultimately dies from losing in 7♥ Hide and Seek.

An athletic girl who is good at feats of agility, strength, and endurance. Ryohei first meets her in his second game, 5♠ Tag. He briefly bonds with her as they were close to clearing the game. The next time she sees him, Arisu despairs over the loss of his friends. She took care of him and accompanies him in his quest since.

No. 1 Takeru Danma "The Hatter"

The founder of the Beach. He wanted to create a paradise in hell, though putting up with people's indulgence took a toll on him...
No. 2 Morizono Aguni

The leading opposition of the Beach. His side attracts people favoring violence and fear.
No. 4 Suguru Niragi

A violent and enigmatic man covered with tattoos.

A tall, tanned woman in dreadlocks who is usually seen along with Chishiya. She is seeking to return to her world so that she could care for her supportive mother in return.

A Beach member in charge of keeping cars fueled.

K♠ Isao Shīrabi
Team K♣
A team of five citizens opposing the players. To clear K♣ Osmosis, five players must team up to outscore them within a time limit.

The leader of the opposing side who hosts the most difficult game involving teamwork.

He is the one who made the rules of this game.

The Drummer of Ginji's band. He's also a well-rounded athlete.

A parkour specialist, he can maneuver over the game field to hound down his opponent.
Jack of Hearts
The mystery citizen who is among the participants of J♥ Solitary Confinement. Surviving players get the game clear when this character is eliminated.

Eventually, the few survivors identified the J♥ as Enji Matsushita, a hypnotherapist who initially partner with serial killer Banda. Through subtle suggestions, he influenced other players into being more aggressive and rash.
King of Diamonds

A conflicted, intelligent man who hosts the most difficult game of wits.

He is first seen in the Beach. Named Keiichi Kuzuryū, he is an executive ranked Number 3. He sides with the Cult Faction, serving directly under The Hatter.
Queen of Hearts

An elegant, young woman in black who handles the most difficult game not for the faint of heart.

She, named Mira Kanō, is first seen as an executive of the Beach. She is ranked Number 7 and is under the Cult Faction.

An enigmatic man Arisu meets in the latter's second game, 5♠ Tag. Resourceful and creative, but he works only for himself, so he sometimes ends up going against the greater good.