The First Division aka "The First Republican" 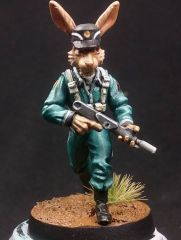 Don't be fooled by their looks, because these plain-looking guys are the most nastiest ones of all the ILR.
While not technically a character per se, they are especially relevant in context because they were (and they still are) the most feared ILR elite military unit among the EDF, since they, since they're the most fanatical military unit in the entire ILR (next to the Special Branch) and the most heavily armed of them. They can be easily identified by their cucumber green uniforms and their black militia caps, used as a reminder they were formely a planetary militia for the ILR.

One of the few female military officers inside the ILR army. Despite having never firing a gun in her life, Tasta is a member of the ILR Intelligence Division and it's considered as an insider heroine to many soldiers due to her contributions in the First Lepine War.

Another unusual female ILR officer, Torri's job is to interrogate POWs to extract whatever secret they could hold. She is notorious for her ruthlessness and being brutal in her job.

A decorated war veteran who held the front lines stead during the darkest days of the late war when the EDF's ruthless aggression forced the war to heights of violence never before believed possibly by the standards of whole setting at the time. He was also intrumental on saving ILR citizens from the EDF/ConFed] from the destroyed colonies nuked by them. He's also known as "The Butcher of Baka"note Yeah, that's his nickname due to his extreme ruthlessness and his extreme methods to deal with his enemies.
Neutral/Other

A Lepine academician from the ILR, albeit a civilian one. Jiro Koda is a professor of History and Comparative Literature from the Coteipi University and it's heavily implied the whole story of the First Lepine War is being told from his (and his colleagues) point of view via a book (which, out-universe, is the players' sourcebook), being he, somewhat implied, affected by the events of that conflict. Curiously enough, his in-universe book caught the attention of some EDF officers, which are very interested to hear about the ILR's point of view of the war.