Characters / Aladdin: The Series
aka: Aladdin The Return Of Jafar 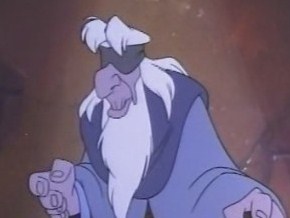 An enigmatic prophet and mystic who travels the streets of Agrabah, sometimes approaching Aladdin when he senses a need for Aladdin's services to fight the forces of evil. 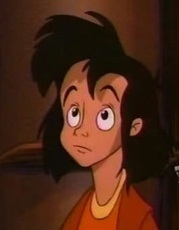 A young, orphaned street urchin girl who manages to find a bottle containing a female genie, named Eden, who becomes her surrogate family. 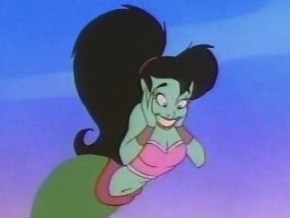 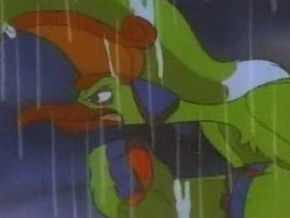 A powerful bird spirit or deity who rules over a rainforest far from Agrabah. Thundra is the goddess of the rains, responsible for controlling all rainclouds and thunderclouds. 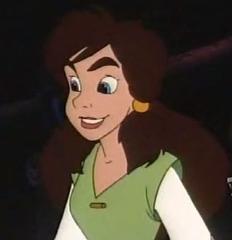 A street rat who fell in love with Aladdin after he helped her out of a jam. Unfortunately for her, he not only already had a fiancée, but she was the Princess. She ends up falling in with a group of Sand Witches to find a way of evening the odds. Eventually, she manages to befriend her rival and gets over Aladdin.

The ghost of an ancient pharaoh who sealed Bizarrah away. He is introduced when you search for Aladdin in his laboratory and gives exposition and instructions for some of the puzzles in Disney's MathQuest with Aladdin. 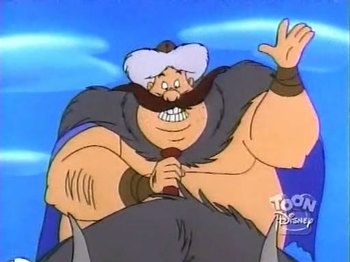 Prince Uncouthma is the large and powerful, somewhat dimwitted yet goodhearted and friendly ruler of the northern barbarian kingdom of Odiferous, a strange land that prizes strength and alarmingly fragrant odors, most notedly in its Trademark Favorite Food; yak milk-based cheeses. Initially an aspiring suitor for Princess Jasmine, he eventually settles down with his own bride, an Odiferan woman named Brawnhilda.

Isabella: (sighs) A world full of wishes before me. And I allowed myself to be used until I had nothing left!

A master magician who only appeared in a two issue Aladdin comic presenting an alternate version of The Return of Jafar. Isabella is similar in appearance to Jafar (except his clothing is green) and has the 'fortune' to be his last master. He uses his third wish to trap Jafar and Iago in the lamp again, sending them back to the cave. Due to persuasion by the Genie, the Sultan hires Isabella to a permanent entertainment job at the palace. 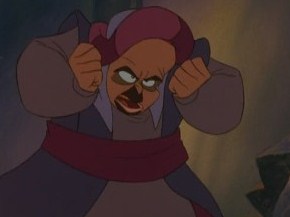 The leader of a gang of bandits, Abis Mal is big on ambition and ego, but short on skill, talents, charms and wits. He first appears in The Return of Jafar, where he becomes Jafar's unwilling sidekick after accidentally recovering the evil genie's lamp from a desert well. He later becomes a recurring antagonist during the animated series, constantly striving with the aide of his sole minion, Haroud Hazi Bin, to defeat Aladdin and become disgustingly wealthy. 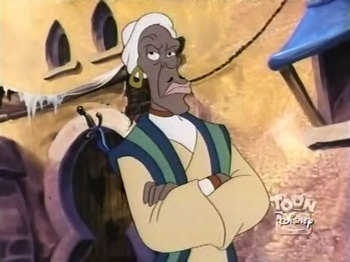 Unique to the animated series, Haroud is Abis Mal's one and only minion, reluctantly following his bumbling master through the desert, aiding in his schemes and trying to keep him from doing anything too stupid. Needless to say, it's a full-time job. 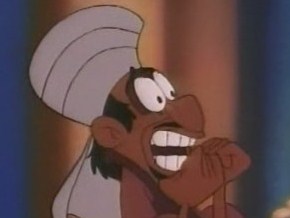 One of the many thieves who stalk the streets of Agrabah, Amin Damoola is notorious throughout the city and amongst his fellow thieves… as the absolute worst thief in all of Agrabah. He is so clumsy that he has been unanimously proclaimed "Butterfingers" by them, eliciting laughter and jeers from his constant bumbling. His burning desire is to prove he is not the worst thief and thusly become incredibly wealthy, which leads him to clashing with Aladdin several times. 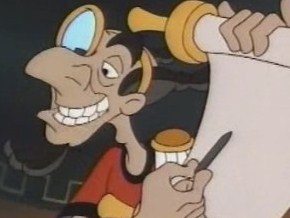 A brilliant and utterly insane Mad Scientist exiled from Greece, Mechanikles seeks to use his inventive genius to create devices with which to fulfill his various schemes, predominantly focusing on conquest of the world or exerting an orderly influence. An obsessive-compulsive with a fixation on cleanliness and neatness, Mechanikles is prone to hysterically manic fits but never loses his head and so always manages to get away. 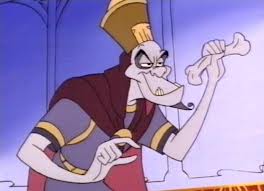 An undead sorcerer and the self-proclaimed "Duke of the Undead." After his attempt to make Jasmine his bride was thwarted by Aladdin, he attempts time and time again to banish Aladdin and his friends to the Netherworld as payback, only to always end up trapped there himself. 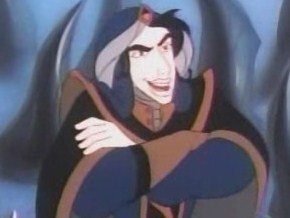 A malevolent and powerful young sorcerer who rules the Land of Black Sand, having taken over from the former ruler, the Evil Sorcerer Destane. Ever greedy for more power, he often butts heads against Aladdin as a result. Being the most competent and iconic villain of the series, he was considered to be the antagonist of the third movie of the trilogy, and if rumors are to be believed, to be revealed as Aladdin's long lost brother. 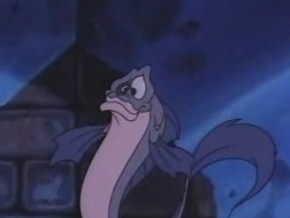 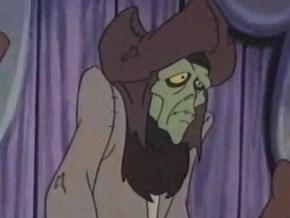 Former ruler of the Land of the Black Sand, an Evil Sorcerer so powerful that even Jafar feared him, until his former apprentice Mozenrath toppled him from his throne and turned him into one of his own undead servants, the Mamlucks. 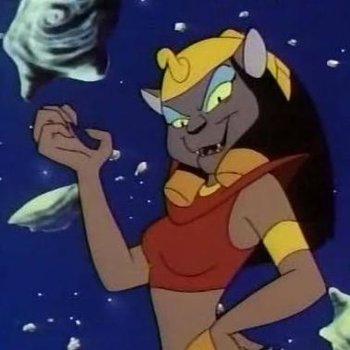 This female Evil Sorceress claims to be an incarnation of all evil, and yearns to crush Agrabah and all of the surrounding kingdoms to dust. 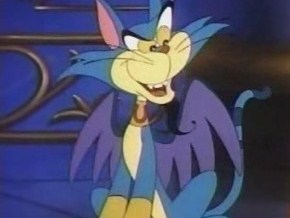 The personification of chaos and disorder. Chaos was manipulated by Mirage as part of a scheme to destroy Agrabah. 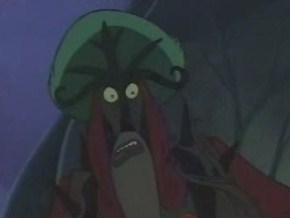 A mysterious plant-man encountered by the Sultan in his youth, Arbutus holds a cold disdain for humanity and seeks only to be left alone. When the Sultan dared to take one of Arbutus' prized blooms, Arbutus turned on him, promising only to let him leave when Arbutus was given leave to come and take the Sultan's most precious treasure in turn. 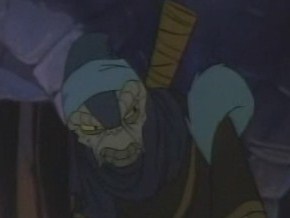 A mystical entity who roams the deserts, a reptilian being who makes a living as a hunter of genies. 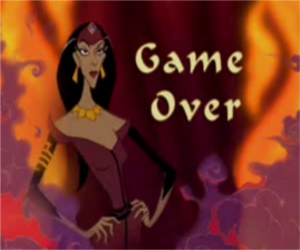 Jafar's twin sister who appears only in a tie-in video game. 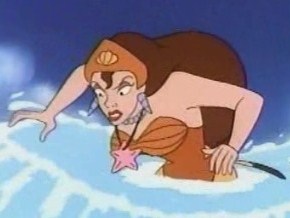 A haughty and malevolent mermaid whom Aladdin and Jasmine encounter during a trip to the coast. Unfortunately for Jasmine, the easily-jealous and possessive Saleen takes a shine to Aladdin and decides she wants him for herself. 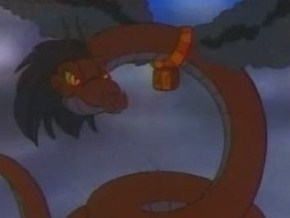 A nature spirit in the form of a giant, winged snake who was once ruler over the rainstorms and Thundra's partner. She stole his powers when she realized his tyrannical nature, imprisoning him inside a cave behind a waterfall that she froze solid. He eventually escapes, hoping to take revenge. 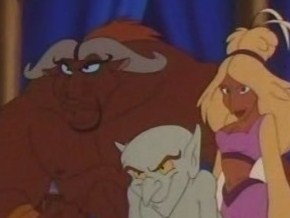 A trio of thieves who were once Aladdin's friends, and Abu's original owners, until they attempted to steal a magical gemstone and make a fortune from it. Instead, it transformed them into monsters, and they disappeared, only to eventually resurface seeking revenge on Aladdin and Abu, the only ones not transformed. 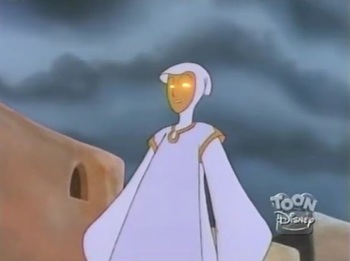 An omnipotent entity who only appears in the episode of the same name. 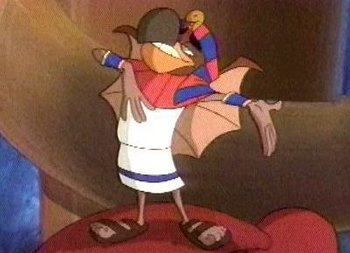 An Egyptian-themed Imp and conman who always causes trouble just for the sake of profit. He travels with a party of four nameless imps, who uses as his minions. 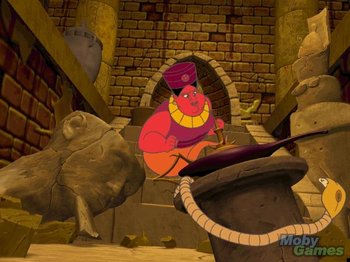 An evil genie who serves as the antagonist for the spin-off Edutainment Game Disney's MathQuest with Aladdin. 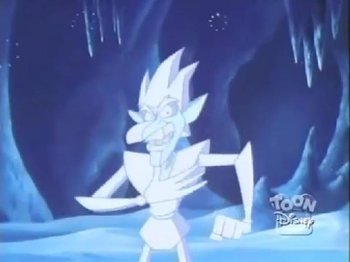 An ice ifrit whom the gang come across in a palace while looking for a treasure Iago told them about. Although initially befriended, they have to fight him when they realize he intends to freeze Agrabah and the rest of the deserts forever.

An ancient demon who once ruled over Agrabah who was inadvertently reawakened by Iago, and promptly set about trying to conquer Agrabah once again.