open/close all folders
The Jaegers 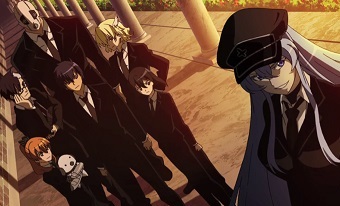 A former member of the Imperial Navy recruited by Esdeath as a member of the Jaegars. Wave is a simple man of common upbringing and is initially naive of the corruption of the Empire. Harboring strong convictions of honor and duty, Wave works tirelessly to make the Empire a better place for all.

His Teigu is Carnage Incarnate: Grand Chariot, a counterpart to the Incursio armor, but considered to be the superior model of the two.

"To kill the one you love... If someone else will do it anyway, I'd rather do it myself."
Voiced by: Ayaka Ohashi (Japanese), Juliet Simmons (English)

Akame's younger sister recruited by Esdeath to form the Jaegars. Like her sister, Kurome is a skilled assassin, forcibly trained since childhood by the Empire to kill effectively and without remorse. She holds a grudge against Akame for abandoning her and their former assassin squad in favor of joining Night Raid.

Her Teigu is March of the Dead: Yatsufusa, a katana that has the power to convert those it kills into undead puppets under its wielder's command. 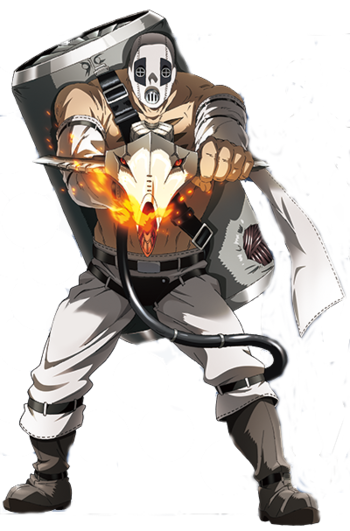 "I'm a soldier. I follow orders. Even for type of work... Even if I must kill."
Voiced by: Eiji Takemoto (Japanese), John Swasey (English)

An intimidating, masked member of the Empire's Incineration Squad. Before joining the Jaegars, Bols's duty was to wipe out whole villages, burning troublesome buildings and populations to the ground in the name of the Empire. When not on duty, Bols is a compassionate family man with a loving wife and daughter he adores.

His Teigu is Purgatory's Invitation: Rubicante, a powerful flamethrower whose flames could not be extinguished, even by water. 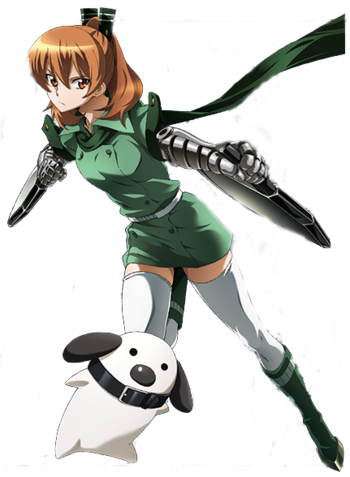 "In the name of absolute justice, I shall make evil pay, here and now!"
Voiced by: Kana Hanazawa (Japanese), Kira Vincent-Davis (English)

A young Imperial Guards soldier recruited by Esdeath as a member of the Jaegars. The impressionable Seryu was personally trained by Imperial Guard Captain Ogre and holds an overwhelming sense of loyalty to justice. Upholding the law and punishing "criminals" without mercy, Seryu makes it her mission to rid the Empire of villainous forces.

Her Teigu is Magical Beast Transformation: Hekatonkheires, a biological type that takes the form of a small dog nicknamed "Koro" that could grow to enormous size and strength. 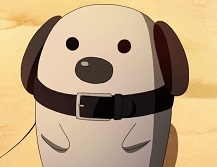 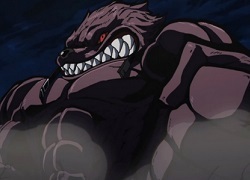 "Not even one of you will be allowed to escape."
Voiced by: Junji Majima (Japanese), Chris Patton (English)

A kind and charming man enlisted by Esdeath into the Jaegars. Run hails from a small rural village, and joins the Jaegers in hopes of one day reforming the Empire from within.

His Teigu is Limitless Flight: Mastema, a pair of discs that sprout angel-like wings, granting their user flight and the ability to fire razor-sharp feather projectiles. 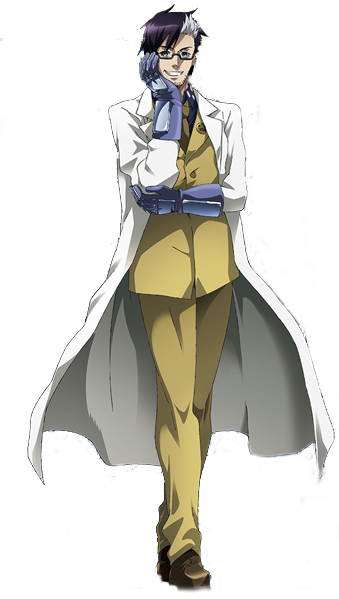 "First impression are important... and would of course be important to a stylish man like myself."
Voiced by: Ken Narita (Japanese), Jay Hickman (English)

A brilliant doctor and scientist of the Empire scouted by Esdeath to join the Jaegars. Though unparalleled in his practice, Dr. Stylish is a man of questionable morals, taking great pleasure in experimenting on living beings, especially humans.

His Teigu is Glorious Hands of God: Perfector, a pair of gloves that drastically improve their user's hand dexterity, allowing them to heal nearly any injury and perform complex surgeries with ease.

A group formed by three Teigu users who were the strongest Teigu-wielding group of the Empire until the appearance of the Jaegers and the strongest members of the army of Esdeath. Each one of them is very powerful and were feared for everyone in the Empire. 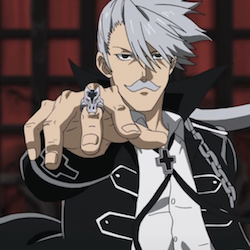 The leader of the Three Beasts. Liver was formerly a righteous general in the empire and Bulat's mentor and friend. Refusing to take bribes, he was imprisoned until Esdeath, recognizing his strength, offered him a place under her command. As a result, Liver has since idolized Esdeath is unfailingly loyal to her. Liver led the Three Beasts in framing Night Raid in a series of political murders to lure them out, eventually confronting Bulat and Tatsumi aboard a cruise ship.

His Teigu is Water Dragon Possession: Black Marlin, a ring that allows him to control and manipulate nearby liquids such as water or, in desperate situations, his own blood. 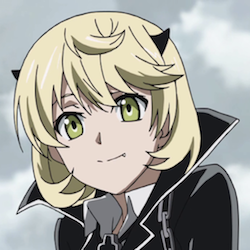 "Considering what I'm going to do to you, I'm pretty sure you'll wish you'd been cut in half"
Voiced by: Hitomi Nabatame (Japanese), Clint Bickham (English)

A member of the Three Beasts under Esdeath's command. His child-like appearance belies his extremely sadistic and cruel nature.

His Teigu is Military Music Dream: Scream, a clarinet that allows him to manipulate the emotions of anyone who hears its music through hypnosis. 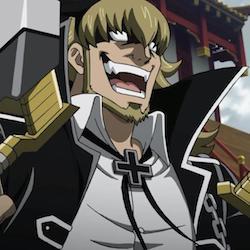 "Fifteen people defeated, is it? All right! The value of this experience will lead me to become stronger!"

A member of the Three Beasts commanded by Esdeath. He is a large, imposing man with an interest in killing so as to gain more "experience."

His Teigu is Double-Bladed Axe: Belvaac, a large double-bladed axe which can also be split into two separate axes that can be thrown and will pursuit their target until they hit.