Note that many tropes currently speak within the context of the Netflix series. As such, some tropes that apply to the TBS series might seem oddly applied, since some characters have changed personalities in between series.

Retsuko and Her Friends 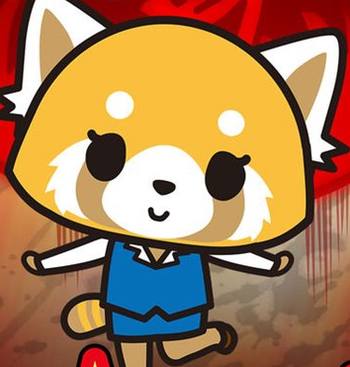 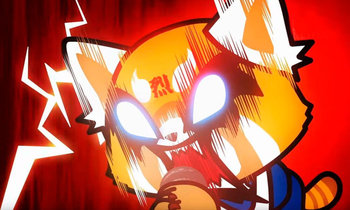 Normal Retsuko: There are thousands of girls who work in offices just like me. But this girl has a secret up her sleeve and a mic in her purse.
Metal Retsuko: CHOKE ON MY RAGE!!!

The title character. A hard-working and mild-mannered red panda who works a normal desk job as an accountant. However, she grows sick of her job and her coworkers at points, leading her to vent her frustrations into singing Death Metal. 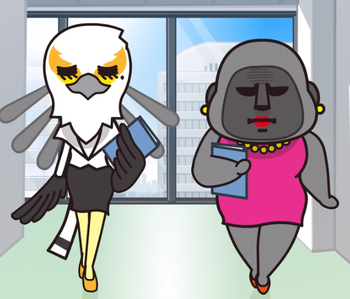 Gori: Not gonna lie, our “baddest bitch in the room” walk is murder on my back.
Washimi: Be strong, we can't show any weakness at work.

A duo of women who are considered extremely successful in their company. Gori is a Gorilla and supervisor on marketing and Washimi the secretarybird is the president's secretary.

They become close friends with Retsuko after they all start doing the same yoga class and often offer her advice.

Known as Eaglette and Ape Admin in the fansubs for the TBS shorts. 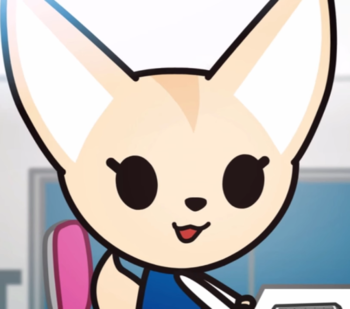 Retsuko's best friend at work and a computer wizard. While the fennec fox seems cold at first with both her monotone voice and cold attitude, she generally cares for her friends and will do whatever she can to make sure they're happy.

Known as Zelda in the fansubs for the TBS shorts. 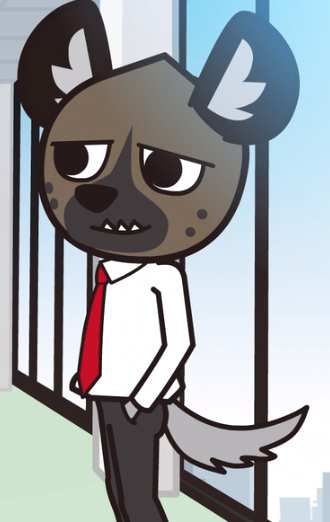 In the TBS series, Haida is a spotted hyena and is a chick magnet who uses his looks to attract his female co-workers into doing his work for him.

In the Netflix web series, however, Haida is a close friend to Retsuko and Fenneko. He tends to be paranoid about a lot of things and is easily flustered, especially over Retsuko, whom he also has feelings for.

Known as Heinrich in the fansubs for the TBS shorts. 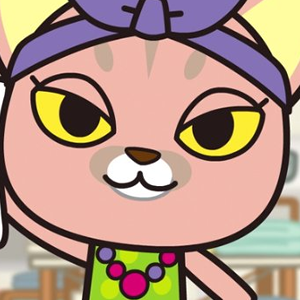 A cougar who is Retsuko's childhood friend. She manages to make it out there without being tied to a job. 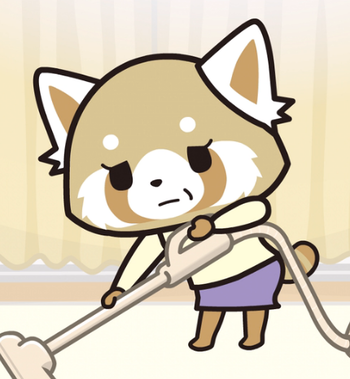 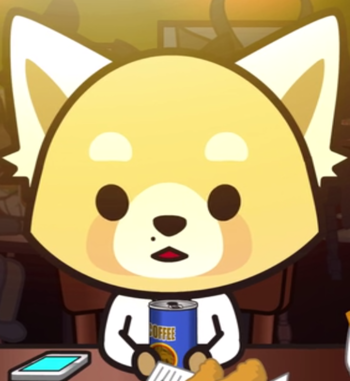 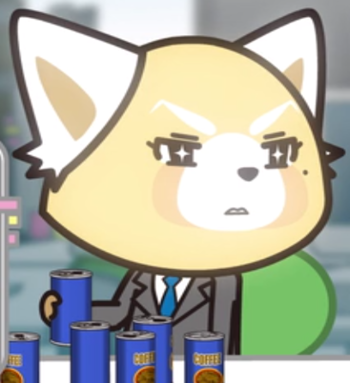 In both series, Resasuke is a red panda who's a love interest for Retsuko. However, in the TBS series, he doesn't talk and is only seen from afar.

The Netflix series expands on this, with him gaining an actual voice and small story arc. He's described as plain-faced and a bit of a loner.

Known as Lester in the fansubs for the TBS shorts. 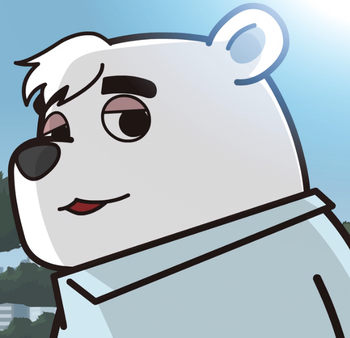 "Be honest, when you first saw me, were you disappointed?"

A friendly polar bear who is set up on an arranged date with Retsuko. 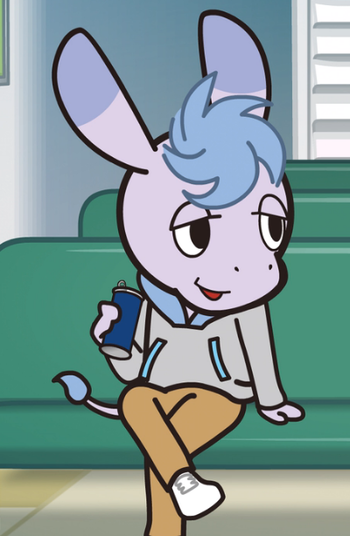 A slacker donkey who secretly is a huge tech mogul. 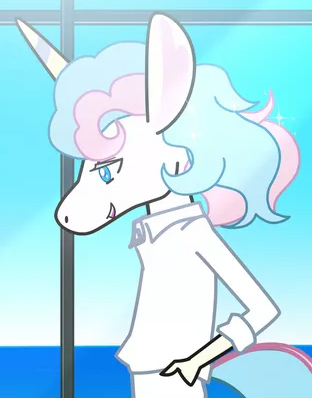 A virtual Bishōnen unicorn from the game Heartthrob! Virtual Boyfriend whom Retsuko has fallen in love with at the beginning of Season 3. 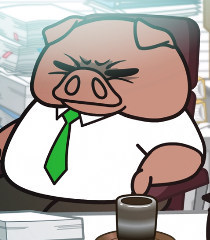 "We deserve a vacation!"

The head of the accounting department, Ton is a pig and a notorious chauvinist who terrorizes his employees and picks on Retsuko in general.

Known as Hog Honcho in the fansubs for the TBS shorts. 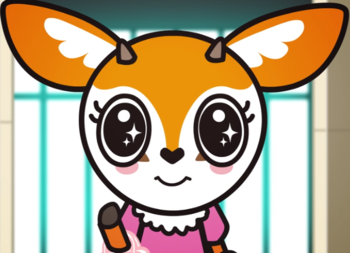 "You don't have to lie, because I don't really care either way."

A soft-spoken gazelle accountant who puts up an optimistic front when in truth she tries to kiss up and annoy others for her amusement.

Known as Giselle in the fansubs for the TBS shorts. 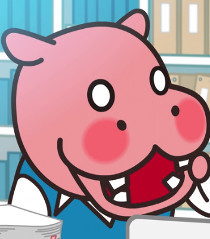 A Hippopotamus lady who is very much into gossip. She is a working mother with three children.

Known as Hippatricia in the fansubs for the TBS shorts. 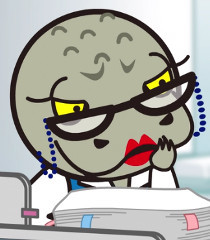 A komodo dragon who is a senior member of the accounting staff and a menace to those under her. She takes great joy in picking on Retsuko and dumping her work on her while trying to get one of her jars open.

Known as Scatherine in the fansubs for the TBS shorts. 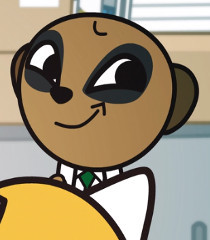 A meerkat and Ton's underling. A doormat to the extreme, Komiya follows Ton's every whim.

Known as Amir in the fansubs for the TBS shorts. 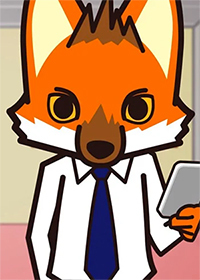 A maned wolf who works at the same company.

Known as Wolfgang in the fansubs for the TBS shorts. 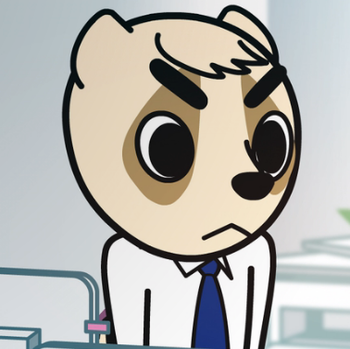 A Japanese badger who recently came out of college.

Known as Doug in the fansubs for the TBS shorts.

Other Members of the Company

A pallas cat who works with Resasuke in the Sales department. 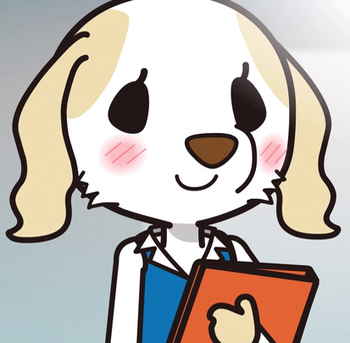 A Borzoi from the Administration department who quickly develops feelings for Haida. 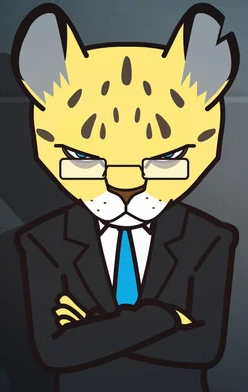 The intimidating leopard manager of the idol group. Retsuko accidentally bumps into his van and more or less is forced to work for him as the group's accountant to repay the debt. 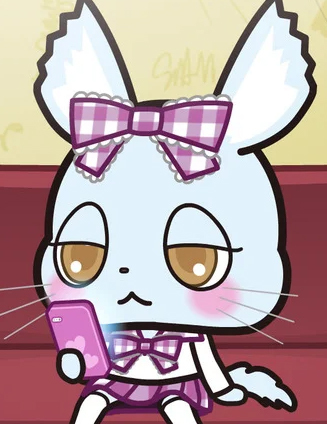 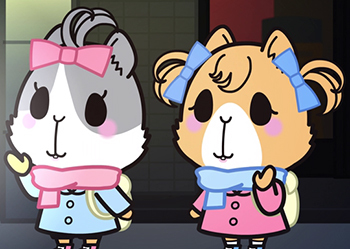 A pair of guinea pigs and the other two members of the group. 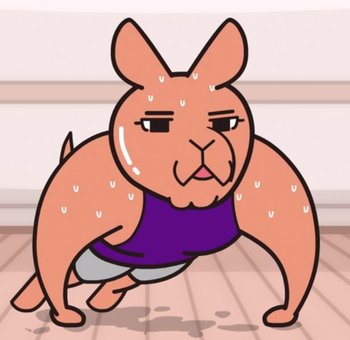 A kangaroo who is the instructor of a yoga class that Retsuko, Washimi, and Gori take together. They had travelled to India and learned the secrets of yoga before opening a studio back in Japan. Their name is unknown because the only word ever said by them is "Protein"... That's it. 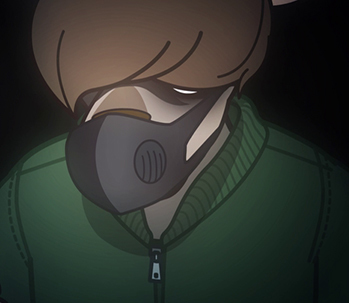 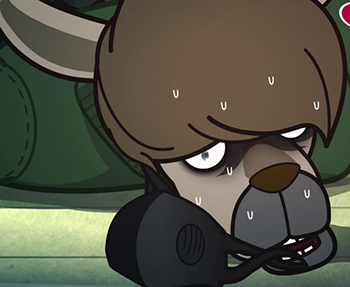 An entitled llama and long-time OTMGirls fanatic who despises the direction the band takes after Retsuko becomes a member. 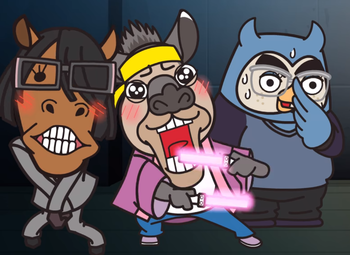 Tanaka (left), Bakkun (center) and Zukkun (right)
"Manaka, you're the best! Towering above the rest! If you don't believe us, put our love to the test!"

A devoted group of OTMGirls fans, comprised of Tanaka, Bakkun and Zukkun, a horse, tapir and owl respectively. They attend every gig and for a while seem to be the group's only source of support and income. 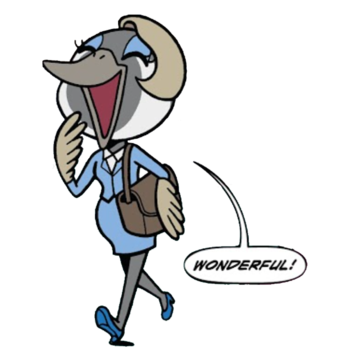 A goose from Carrier Man's Canadian branch who visits as a "productivity advisor" after her department beats Japan on employee satisfaction scores. Naturally, Retsuko is charged with handling her. 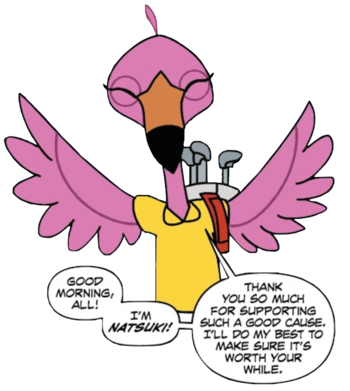 Appearing in Aggretsuko: Meet Her Friends: Issue 3. One of two professional golf players giving out a free class as part of a silent auction. Due to a mix-up, Retsuko books her as part of Ton's scheme to win the other golfer's class without spending too much money, with the put-upon employee taking (read:forced to take) her lessons. 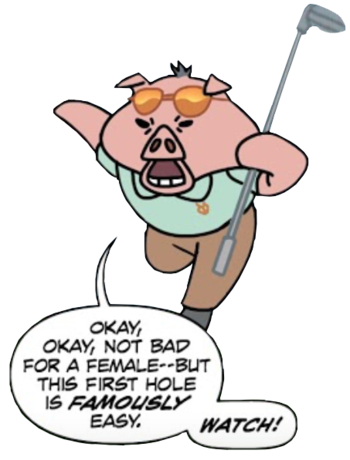 Appearing in Aggretsuko: Meet Her Friends: Issue 3. One of two professional golf players giving out a free class as part of a silent auction. Ton's preferred choice for a teacher, his skills are overshadowed by his winning personality, progressive opinions and humble attitude.