This is the list of characters of Agarest Senki Zero. Beware, there a lot of unmarked spoilers below. Read at your own risk. 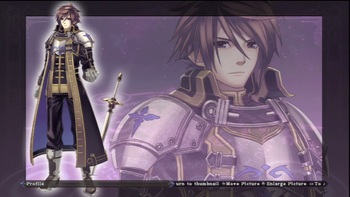 Sieghart is a young commander in service to the Armies of Light. He is very serious and focused, and has a reputation for being a very hard worker who tends to be stubborn and obstinate. Although sometimes hard to get along with, he is well respected by all of the men under his command. In spite of his youth, he is considered a gifted commander by his fellow officers and appears to have a bright future ahead of him. 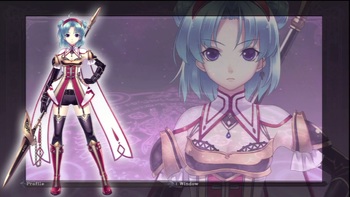 A heroine of the first generation, Friedelinde is a lieutenant under the direct command of Sieghart and also his de facto second-in-command. Friedelinde, or Linda as her friends call her, has very strong feelings for Sieghart and tries to express them in her own unique way, but his inability to recognize even the most basic of emotions both frustrates and depresses her. 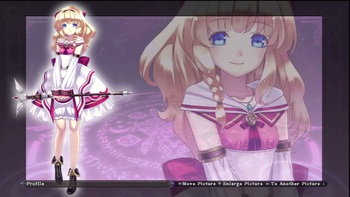 A heroine of the first generation, Routier is a young girl traveling through the land with a young onerthes man who she considers her brother. Having been constantly on the move, she never had the chance to make any friends and, as a result, is almost pathologically shy. Whenever she finds herself in an unfamiliar situation, or in the company of strangers, her first reaction is to hide behind her brother. Routier inherited the power to see into the future from her mother, who was rumored to be a fortune teller of great skill. 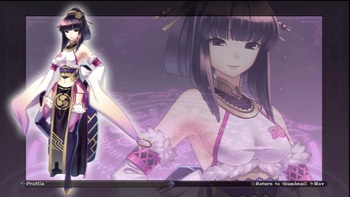 One of the heroines of the first generation, Sayane is a harpuia woman who very rarely gets angry and is always the eternal optimist with a smile of her face. However, she can be incredibly stubborn and obstinate. Although harpuia are known for their stellar sense of direction, that is one aspect of her heritage that she sadly did not inherit, as such advanced concepts of 'left' and 'right' genuinely confuse her. It was while she was lost that she first encountered Sieghart and his companions. Initially, she joined up with Sieghart and Company because it looked like they were having fun, but as Sieghart's personality grew on her she began to develop feelings for him.

Sayane was born in a human village located near the Scarred Mountains. As the village was the target of constant monster attacks, the villagers incorporated the surrounding natural features into a secure fort and organized to fight off the monstrous incursions on their own. As a result, martial arts training become mandatory for both men and women. In fact, a women's ability to fight was almost as important as their homemaking skills.

Sayane's hobby is writing a form of religious haiku that has its foundation in nature worship. Although she enjoys it very much, she isn't the most skilled writer, as her prose tends to be over-wrought and is almost always missing the seasonal and votive words that define the genre. 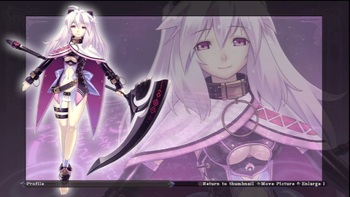 Mimel is a mysterious young woman who was saved from being banished to the frigid hell of Findeste by the forces of light, who recognized Mimel's overwhelming magical powers and her ability to wield the Power of Liberation. In order to save Sieghart, she pushed her magical abilities to a dangerous extreme and almost died as a result. Unfortunately, while bringing him back from the brink of death, she mistakenly transferred her Power of Liberation to him, altering the course of history as well as their individual fates. 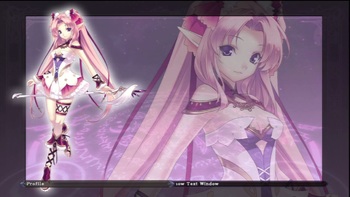 A high elf who is accompanying Sieghart on his travels at the suggestion of her father, Eleazal, the commander in chief of the forces of light. She was originally forbidden to go to the far north of the continent due to the war, but declared to her father that "I want to do whatever I am able!" and joined the war effort on her own. After much consideration, her father had her work behind the front lines as a healer. For many of the injured soldiers, Alice's gentle smile was enough to make them forget about their grievous wounds. She knows Sieghart, but by reputation only, having traveled with forces on a previous campaign.

Alice was born later in Eleazel's lifetime, so she was coddled and wanted for nothing. However, as her father was frequently away from home due to his duties as commander, Alice summoned a creature with a strength of will and character equal to that of Eleazel to act as a kind of surrogate father.

She eventually became the guardian of Sieghart's son Leonis and raised him as if he was her own flesh and blood. Of course, this means that she raised him to be somewhat unnaturally grave and thoughtful, though this may have been intentional on her part in a desperate bid to countact the insanity of the adults that surround him. 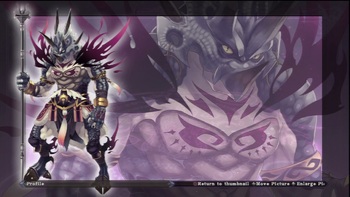 A beast summoned by Alice to act as a sort of part-time father figure when she was a child, Galios is what is known as a larva, who normally only exist as spiritual entities within the Boundary. However, by attenuating to the resonance projected by the magic of a high elf, a larva is able to cross over to the physical world and construct for itself a physical body that will fit the needs and thoughts of the elf that performed the summoning. While a larva such as Galios normally don't possess feelings, the intent behind Alice's summoning imbued him with the empathy normally only found in mortals.

Galios quietly and efficiently serves Alice as both protector and father-figure, and for the most part has little desire to interact with anyone else. However, he will on occasion train and spar against the soldiers around him. In addition, his air of command, combined with his incredible bravery, has earned the respect of all those who have fought by his side. The ferocity with which he wields his massive spears is legendary, as are the awkward situations that his bulky stature and imposing demeanor sometimes land him in. 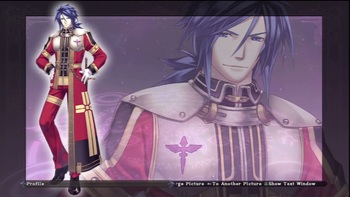 A lieutenant serving under Sieghart along with Friedelinde, Eugene is the sole scion of the Lagrange family and a cousin of Friedelinde. He was originally assigned the task of guiding Sieghart to Inicio and joined him when he and his company departed on their journey. 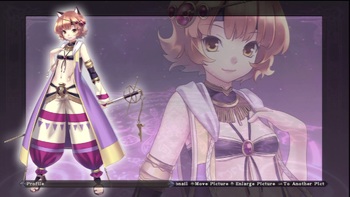 A cute and cheerful neocollum girl raised by the ryulent, Tetora is tasked with the unenviable job of cleansing the earth after being befouled by war. Although she appears to be a child, she shows a level of maturity that is far beyond her years as a result of her extensive travels. Except in the company of family, Tetora normally maintains a facade of playful cheerfulness at all times. 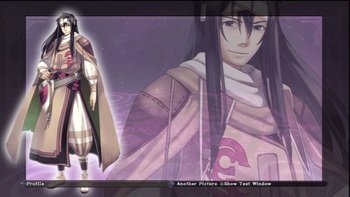 A young onerthes male who is traveling with Routier, a human orphan he has taken into his care. In order to keep a low profile and to avoid being targeted by onerthes hunters, he takes great pains to keep his third-eye concealed at all times. Although his race is known for their incredibly clairvoyant abilities, Cal-Vina's powers are almost non-existent. He left on his travels in order to gain life experience in hopes of expanding and training his clairvoyant powers. 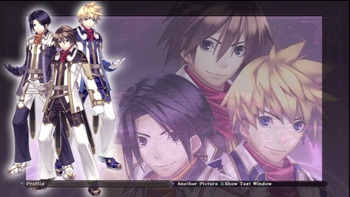 A hero of the second generation, Leonis is proud of the accomplishments of his parents in the name of peace and enthusiastically followed in their footsteps. Because he was promoted to the position of commander at such a young age, he can't stop wondering if his promotion was due to his skills or if he was simply put in charge because of his father's past successes.

His philosophy of living life to its fullest comes from the influence of those around him as well as the loss of his parents at an early age. Leonis and well-behaved and mature beyond his years as a result of being raised with a certain amount of discipline. However, as he is so self-sufficient, this rather large pool of parental figures suffer from crushing boredom, as they would like nothing better than to coddle him into insensibility.

Leonis' ultimate goal in life is to bring about peace in the world, although he is unsure of what his role would be in a world without war. 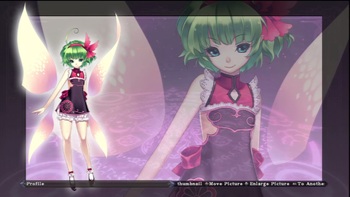 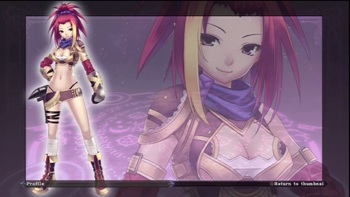 Daughter of Zelger, who joins the party as to help atone for her father's failure. Befitting her independant streak, her motto is "A woman's bravado must be equal to that of any man!" Dana's outgoing personality and automatic assumption of the older sister role makes her a good leader and the source of an endless stream of pep talks. 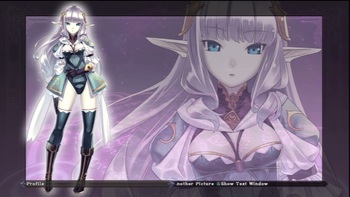 The Cloudcuckoolander
Voiced by: Jun Miruno.

Shernini is a syrium woman who is one of Apli's oldest friends. Being uninterested in violence, and unwilling to dwell amongst those who keep fighting, Shernini chose to live a quiet, solitary life deep within the forest. However, at the urging of Hass Calinou, she joins Leonis and his companions in hopes of ending the war. Shernini is most comfortable being amongst those of mixed descent as pure-bred high elves tend to make her uncomfortable. Unfortunately, her being syrium makes her an automatic enemy to some. 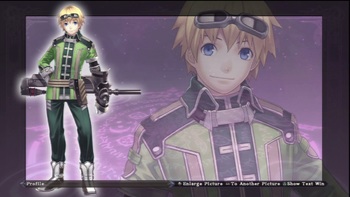 Niel is a young boy who inherited his father's personality, but unfortunately got his mother's rather stunning and decidedly feminine looks at the same time. He considers Leonis to be his big brother and tries very hard to be just like him. As being slightly shorter than other boys of his age, Niel is obsessed with his height, or lack thereof.

Vashtornote Please put any post-Reveal tropes in the Forces of Darkness section. Any tropes applicable to him from the first game should go in their respective locations as well.