Characters / A Song of Ice and Fire - House Stark - Direwolves

This is a listing of the direwolves kept by Ned Stark's children in A Song of Ice and Fire.

"Summer’s howls were long and sad, full of grief and longing. Shaggydog’s were more savage. Their voices echoed through the yards and halls until the castle rang and it seemed as though some very pack of direwolves haunted Winterfell, instead of only two… two where they had once been six. Do they miss their brothers and sisters too? Bran wondered. Are they calling to Grey Wind and Ghost, to Nymeria and Lady’s Shade? Do they want them to come home and be a pack together?"
— Bran Stark

During the very first chapter of the series, the Starks find a dead direwolf (impaled through the throat by a stag's antler) and her six pups; three males (Grey Wind, Summer, Shaggydog), two females (Lady and Nymeria) and an mute albino male (Ghost), who is found a little way off from his litter. "Does This Remind You of Anything?," the characters ask each other. Each trueborn Stark child takes a pup, with the Ned Stark's illegitimate son Jon Snow taking the albino pup, who is part of the litter but also somewhat of an outsider, just like him. The personalities of the wolves mirror their owners'. They are the first direwolves seen south of the Wall in two hundred years.

"He's a direwolf, not a dog, and dangerous to men he does not trust."
— Robb Stark

Robb's direwolf. Grey Wind is a fast and grey direwolf who fights alongside his master in the War of the Five Kings. 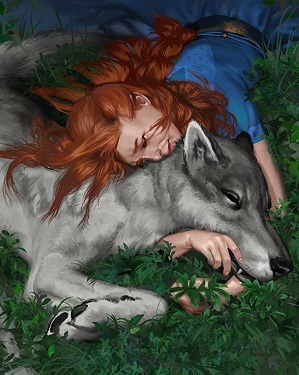 "She is of the North. She deserves better than a butcher."
— Ned Stark

Sansa's direwolf. Lady is the best behaved and most obedient of the direwolves.

"We had to throw rocks. I told her to run, to go be free, that I didn't want her anymore. There were other wolves for her to play with, we heard them howling, and Jory said the woods were full of game, so she'd have deer to hunt. Only she kept following and finally we had to throw rocks. I hit her twice. She whined and looked at me and I felt so 'shamed, but it was right, wasn't it? The queen would have killed her."
— Arya Stark

Arya's direwolf. She is a wild and unkempt creature, much like her master. She is forced to leave Arya's side early in the series and now roams the Riverlands, building up a pack of hundreds of common wolves that have become the terror of the countryside. 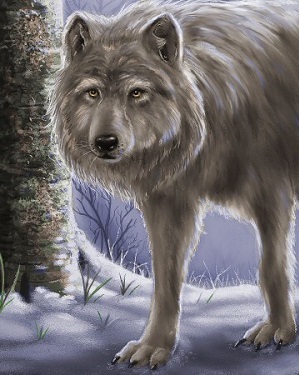 Bran's direwolf and closest companion. He often wargs into Summer and lives as his wolf.

Rickon's direwolf. He is the most wild and potentially the most dangerous of all the direwolves, thanks to becoming bonded with a temperamental three year old.

See the The Night's Watch page.