Characters / A Song of Ice and Fire - House Glover

This is a listing of the members of House Glover in A Song of Ice and Fire. 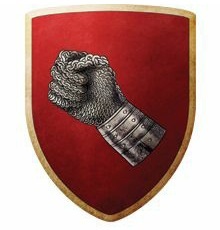 A powerful noble house seated at Deepwood Motte, a small fortress and town located on a hill in the Wolfswood on the northwestern coast, near the Bay of Ice. They are one of the principal houses sworn to Winterfell and have several smaller houses sworn to them that reside in the Wolfswood, which include House Forrester, House Woods, House Branch, and House Bole. They once ruled as kings before being reduced to vassals by House Stark.

Their blazon is silver mailed fist on scarlet. Their words are not mentioned in the books. 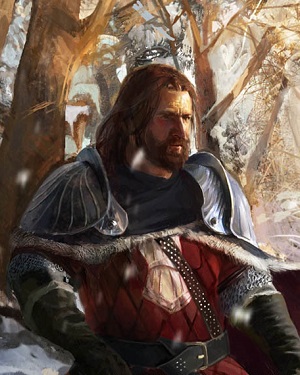 Head of House Glover and Master of Deepwood Motte. He is unwed, but might be a widower according to semi-canon sources.

Brother of Galbert Glover and the current heir to House Glover. He is one of Robb Stark's commanders and was assigned to fight under Lord Roose Bolton. Married to Sybelle Locke and has a son named Gawen and daughter named Erena.

Wife of Robett Glover and mother to his son Gawen and daughter Erena. She is highly religious and prays often to the Old Gods.

A member of House Glover who served as The Squire to Brandon Stark. His relationship to the main Glover family is unknown.

Clans Bole, Branch, Forrester, and Woods of the Wolfswood are sworn to the Glovers.

A member of House Woods who serves the Glover's as a scout. He guides Stannis Baratheon's army through the Wolfswood to the Bolton occupied Winterfell.

A member of House Branch who serves the Glover's as a scout and joins Stannis' army with Ned Woods.