Characters / A Song of Ice and Fire - House Frey

This is a listing of members of House Frey that appear in A Song of Ice and Fire.

House Frey of the Crossing 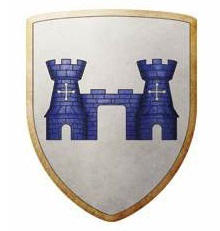 Powerful bannermen of House Tully, and Lords of the Crossing. Their seat, the Twins, is the only way to cross a major river, which has made them very rich. The current head of the house is Walder Frey, with most of his progeny being just as weaselly and scheming just like him, holding intense grudges and high ambition. Although not a traditional "Great" house, they rise in power during the civil war, though they are always disliked amongst their current allies. Lord Walder Frey is over 90, currently on his 8th wife. With over 25 legitimate sons and countless daughters, bastards, and grandchildren, he brings new meaning to the Big, Screwed-Up Family trope. Their members tend to have a weaselly appearance and their sigil is two towers. Strangely for a house with such a major role in the plot, their words have not been revealed, even through Word Of God, though it is implied in the HBO Series their words are "We Stand Together".

House Frey is a relatively young noble house (~600 years old) who rose to their status through collecting bridge fares via their strategic location at the Green Fork, growing wealthy in the process. They have a considerable rivalry with the Crannogmen and House Reed of the Neck, having tried to gnaw lands from them for centuries. Alongside the keeps of their vassals of Houses Erenford and Charlton, the Twins is the northernmost castle in the Riverlands.

Tropes related to House Frey applying to them in general or to individuals without their own sections. 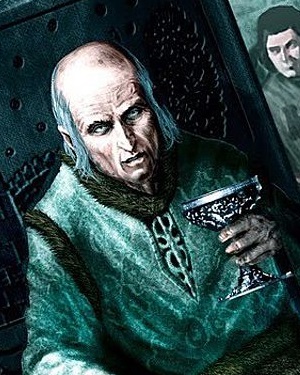 "You will forgive me if I do not kneel, I know. My legs no longer work as they did, though that which hangs between’em serves well enough, heh."

Current Lord of the Crossing, Walder Frey is a weaselly, ambitious man well into his nineties and on his eighth wife.

"They are all waiting for me to die. Stevron's been waiting for forty years, but I keep disappointing him. Heh. Why should I die just so he can be a lord?"
—Lord Walder Frey

Firstborn son of Lord Walder Frey and his first wife Perra Royce and heir to the twins. He has been married three times (to Corenna Swann, Jeyne Lydden, and Marsella Waynwood) and has numerous children, three sons Ryman, Aegon, and Walton, born of his first, second, and third wives, respectively, and a daughter by his second wife, Maegelle, who was married to Ser Dafyn Vance, with three children Marianne, Walder, and Patrek Vance. He is the full brother of Emmon, Aenys, and Perriane, who is married to Ser Leslyn Haigh with three sons Harys (the father of Walder Haigh), Donnel, and Alyn.

Third son of Lord Walder Frey and his first wife Perra Royce. He is married to Tyana Wylde and has two sons: Aegon and Rhaegar Frey.

Fourth son of Lord Walder Frey and the first son of his second wife Cyrenna Swann. He is married to Alys Frey and has two children, Tytos, married to Zhoe Blantree, and Kyra, married to Ser Garse Goodbrook, and four grandchildren, Zia and Zachary from Tytos, and Walder and Jeyne Goodbrook from Kyra. He is full brother of Septon Luceon.

See The Faith of the Seven character page.

Sixth son of Lord Walder Frey and first son born to his third wife Amarei Crakehall. Married to Bellena Hawick and has one son, Arwood. He is full brother to Lythene (married to Lucias Vypren), Symond, Danwell, Merrett, Geremy, and Raymund.

Seventh son of Lord Walder Frey and second son born to his third wife Amarei Crakehall. Married to Bethario of Braavos with whom he has three children: Alesander, Alyx, and Bradamar.

The eighth son of Walder and a failed tourney knight. He married to Wynafrei Whent with no children.
Merrett Frey*

Ninth son of Walder Frey and fourth son born to his third wife Amarei Crakehall. Married to Mariya Darry and has four children, Amerei, Fat Walda, Marissa, and Little Walder. Serves as a POV character for the epilogue of A Storm of Swords.

The tenth son of Lord Walder Frey, he is the fifth son born Lord Walder Frey's marriage to Amarei Crakehall. He married Carolei Waynwood and had two children, Sandor and Cynthea Frey.

Twelfth son of Walder Frey and the first son of his fourth wife Alyssa Blackwood. He is married to Leonella Lefford and has four children, Tysane, Walda, Emberlei, and Leana. He is full brother to Jammos, Whalen, Morya (married to Flement Brax), and Tyta. He serves as the steward for the Twins.

The fourteen son of Lord Walder. He married to Sylwa Paege, with children Hoster and Merianne "Merry".
Ser Perwyn Frey

The fifteenth son of Lord Walder Frey and the first son born in the marriage between Walder and Bethany Rosby. He is full brother to Benfrey, Willamen, Olyvar, and Roslin.

The sixteenth son of Lord Walder and second son born of his marriage to Bethany Rosby.

The eighteenth son of Lord Walder Frey, the fourth with his sixth wife Bethany Rosby.

Twenty-second and youngest son of Walder Frey, the fourth with his seventh wife, Anarra Farring...maybe. He is full brother to Arwyn, Wendel, Colmar, Waltyr, and Shirei.

"That one is more dangerous than any of his trueborn brothers."
—Jaime Lannister

Eldest bastard of Lord Walder Frey. He is a noted warrior and often given command of any military operations House Frey conducts. His personal sigil is a silver-grey castle on blue beneath a red bend sinister. Married to a woman of House Charleton and has two children, Walda and Aemon Rivers, and a granddaughter from Aemon, also named Walda.

A younger bastard of Lord Walder Frey. His mother was a peasant who milked goats.

"A sot, a fool, and a craven. Lord Walder had best outlive this one, or the Freys are done."
—Jaime Lannister

Eldest son of Stevron Frey and his first wife Corenna Swann and new heir to the Twins after his father died, until his own death. He is married and has three sons, Edwyn, "Black" Walder, and Petyr.

"Forgive my Aegon the noise. He has less wits than a crannogman."
—Lord Walder Frey

Second son of Stevron Frey and first child of his second wife Jeyne Lynden. He is full brother to Maegelle. He is a half-wit who is used as the jester of the Twins.

The only son of Ser Hosteen Frey and Bellena Royce. Married to Ryella Royce, and has four children: Ryella, Androw, Alyn, and Hostella.

"The big one they call little, it comes to me he's well named. Big outside, little inside, and mean down to the bones."
—Osha

The only son of Merrett Frey and Mariya Darry, brother to Amerei, "Fat" Walda, and Marissa Frey. His personal coat of arms is the twin towers of House Frey quartered with the brindled boar of House Crakehall and the plowman of House Darry. He is tall and stout, with a red face and big round belly.

The eldest son of Jammos Frey, himself thirteenth son of Walder and second son of his marriage to Alyssa Blackwood, and Sallei Paege. He is brother to Dickon and Mathis. His personal coat of arms quarters the tree and ravens of House Blackwood with the twinning snakes of House Paege and the twin towers of House Frey. He is described as small and fox-faced.

The son of the late Geremy Frey, and a squire in The Vale.
Alesander Frey

The oldest son of Symond Frey and a singer.
Bradamar Frey

The second son of Symond Frey, and the ward of a merchant in Braavos.

Eldest son of Ser Ryman Frey, Ser Stevron's grandson and Lord Walder's great-grandson. Married to Janyce Hunter and has only one daughter: Walda. He is the new heir to the Twins after his father's death. 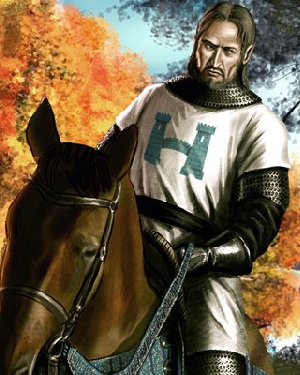 Third son of Ser Ryman Frey, Ser Stevron's grandson and Lord Walder's great-grandson. Married to Mylenda Caron, who is three times his own age. They have one daughter: Perra Frey, though maybe she is actually Black Walder's daughter.

The fourth daughter of Lord Walder and the second one born to Alyssa Blackwood. She remains a maid — supposedly — at 29 years.

The eldest daughter of Merrett Frey and Mariya Darry. She's known for her promiscuity. She was married to Ser Pate of the Blue Fork. As part of the Frey-Lannister alliance, she's married to Lancel Lannister and becomes Lady of Darry due to her mother's claim.

The only daughter of Walton Frey, himself third son of Stevron Frey and only child by his third wife Marsella Waynwood, and Deana Hardyng. She is sister to Steffon and Bryan.

A cadet branch of House Frey established in Riverrun during the War of the Five Kings. From the start of the war, this cadet branch fought for House Lannister and was awarded with Riverrun following the Red Wedding.

Second son of Lord Walder Frey and his first wife, Lady Perra Royce. He's married to Genna Lannister and has four sons (Cleos, Lyonel (who is married to Melesa Crakehall), Tion, and "Red" Walder) who are allegedly his. He is now head of House Frey of Riverrun and Lord of Riverrun.
Lady Genna Lannister 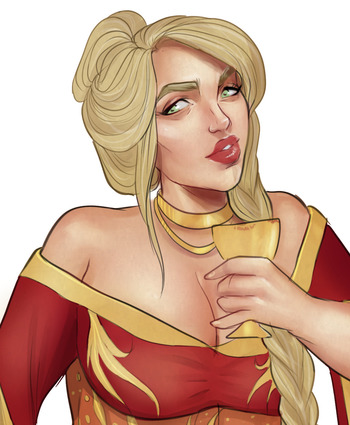 "Men are such thundering great fools. Even the sort who come along once in a thousand years."

Third child and only daughter of Tytos Lannister and Jeyne Marbrand. Married to Emmon Frey, with whom she has four sons (Cleos, Lyonel, Tion, and "Red" Walder). Genna had a close relationship with each of her brothers, and has a personality to match each of them. She was betrothed and wed to Emmon Frey by her father when she was only seven-years-old, a match ten-year-old Tywin objected to. Nevertheless, she has grown into a strong representative of House Lannister whose counsel many respect. 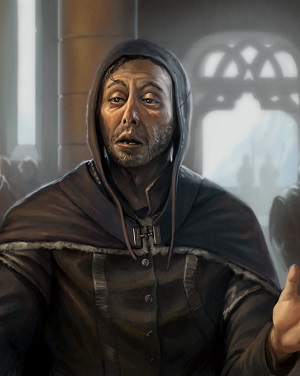 "Ser Cleos looked like a weasel, fought like a goose, and had the courage of an especially brave ewe."
—Jaime Lannister

The eldest of Emmon Frey and Genna Lannister's four sons. Married to Jeyne Darry, sister of Mariya, his half-uncle Merrett's wife, with whom he has two sons, Tywin and Willem. He's fighting for House Lannister at the start of the War of the Five Kings. His personal coat-of-arms is the twin towers of House Frey and the golden lion of House Lannister, quartered.

Third son of Emmon Frey and Genna Lannister. Like his older brother Cleos, he's fighting for House Lannister at the start of the War of the Five Kings. He's part of the host commanded by Jaime Lannister.
Tywin Frey 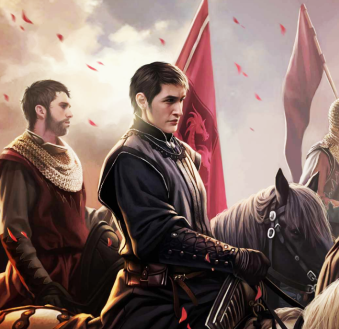 Lord of the Crossing during the Dance of the Dragons. He fought valiantly for the Blacks until being killed at the Fishfeed.

Alternative Title(s): A Song Of Ice And Fire House Frey Of Riverrun