Characters / A Song Of Ice And Fire House Dustin

This is a listing of the members of House Dustin and it's vassals who appear in the Fantasy series A Song of Ice and Fire. Visit here for the main character index. 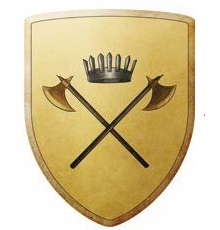 "Fear is what keeps a man alive in this world of treachery and deceit. Even here in Barrowton the crows are circling, waiting to feast upon our flesh."
—Roose Bolton

A powerful Northern noble house seated at Barrow Hall in the town of Barrowton, from where they rule over the Barrowlands. During the Age of Heroes they ruled as Barrow Kings, styling themselves Kings of the First Men, until they bent the knee to House Stark. They have a few smaller house sworn to them, including House Stout. Their arms portray two rusted longaxes with black shafts crossed, a black crown between their points, on yellow. Their words are not known.

"The day I learned that Brandon was to marry Catelyn Tully, though... there was nothing sweet about that pain. He never wanted her, I promise you that. He told me so, on our last night together... but Rickard Stark had great ambitions too. Southron ambitions that would not be served by having his heir marry the daughter of one of his own vassals."

The former head of House Dustin, killed during Robert's Rebellion.

"Best make an end to these lions before the dragons come."

Lord of Barrowton during the Dance of the Dragons, he sided with Rhaenyra Targaryen and became one of her top generals.

A petty noble house sworn to House Dustin. Their seat is Goldgrass, a small keep near the eastern gate of Barrowton.

The grizzled old Lord of Goldgrass.

An elderly knight of House Stout who serves in the Night's Watch.