A group of Ultimates that had been invited to become the 80th Class of Hope's Peak Academy, shortly before the Tragedy hit. During the Hope's Peak Killing Game, they were captured by Ultimate Despair and sent up into space for their own Killing Games. 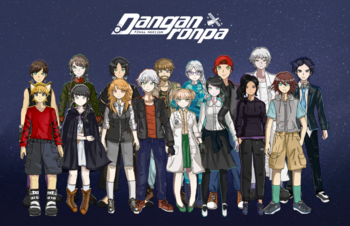 Students scouted and sent invitation letters to attend Hope's Peak as Class 80 shortly before the Tragedy struck. Captured by the Despairs at some point during the Hope's Peak Killing Game. This class ended up on Horizon Station. All of them have some degree on mental instability, and spent time in the station's sanitarium.

Heh it's a Thief's job to open doors. Let's see where this goes.

A young silver-haired thief who's successfully stolen (among other things) the Mona Lisa. He seems to have a good head on his shoulders.

He (or rather, his other half Mr. Psycho) is the culprit of the Third Trial. However, he manages to survive the execution and hide in the vents.

He escaped the station, survived the moon, and went on to have a child with Alice.

Well it is sort of nerve wracking, but it's nice to know I'm not alone.

A short but well-endowed English girl with a fondness for animals and an unwillingness to take off the black glove on her right hand. Hangs out with Hayate, Shiori, and Akiko the most.

She escaped the station and the Moon Base, and goes on to open an orphanage and have a daughter with Hayate.

You should be more careful girl. Asking people the wrong question can get you into a world of trouble.

An anti-social young man with exceptional skill with guns. He's determined to win the Killing Game his own way.

Is the victim of the fourth case, courtesy on a summoned monster clawing the effects of cyanide poisoning into his throat.

Magic. That is the only explanation.
No, you're wrong!

A cute-but-quiet young girl with an interest in magic. She becomes good friends with Alice, Hayate, and Galexialyn.

She escaped the station and moon, along with Mr. BonBon.

People always ask for the truth, but rarely are they prepared for it.

A mysterious person with a gender that's difficult to discern. They have a creepy aura about them and no real knowledge about the concept of 'having friends'. Bonds a little with Shiori, though.

Is technically the culprit of the fourth trial, having used magic to save Shiori at the cost of Ringo's life. However, since she used a summoned beast to do the actual killing, she isn't executed.

She escaped the station, but ultimately (technically) died on the Moon.

Shuhei Kisaki, Ultimate Scientist. I believe that's the only greeting that is necessary for the moment.

A tall young man with an interest in science (specifically Forensics). Is pre-Killing Game friends with Giselly and Miyaki (from Sea of Tranquility).

He escaped the station and the moon.

Look I'm used to pissing people off, it's my charm

A Japanese/Filipino girl with a rather sour disposition. Knows Shuhei from before the Killing Game.

She was the mole, having been forced to try to kill Alice in exchange for the destruction of the Despair computer virus she was forced to make. Was the final (student) victim of the killing game.

If you need someone to juggle a thousand things at once, I'm your man!

A young man with great skill at organizing celebrations. Befriends Rei early on.

One of the victims of the third trial, after causing the fatal events in the first place.

A beautiful violinist with a hidden dark side to her. She befriends Nico during the first day on the station.

Is the culprit of the second trial, having been coerced into killing by Raef (then killing him in turn).

A heavily bearded teen who's good at survival. Gets along well with Nico.

One of the Third Trial victims.

I don't like the implications of just making random assumptions. Though the one thing I have trouble guessing is anything to do with politics.

A silver-haired girl with her own YouTube channel and an amazing ability for guessing developments, having once guessed the ending of a five-book series shortly after the first book was published. Would prefer to be known as an Educated Guesser. She quickly befriends Rei during the first few days on the station.

The first victim of the second case.

Sorry if I was rude before, not all parts of me agree.

An energetic girl with more personalities than there should be, she has a rather sporty look for someone with her talent. There's a reason or two for that.

Blown up shortly before the final day on the station.

A perpetually shirtless man with long hair and self defense skills. Good friends with Akiho.

He escaped the station.

A Japanese/Welsh girl with a standoffish disposition. She befriends Alice over the course of the game.

Blown up shortly before the final day on the station.

A mysterious individual with fox ears on their head. Befriends Hayate early on.

One of the victims of the Second Trial, after trying to manipulate the culprit into doing his bidding.

An American football player. Changed his name and left America after his father succumbed to cancer. Has anger issues and an unwillingness to surpass his father.

The first victim of the Horizon Station Killing Game.

Students scouted and sent invitation letters to attend Hope's Peak as Class 80 shortly before the Tragedy struck. Captured by the Despairs at some point during the Hope's Peak Killing Game. This class ended up on Tranquility Base.

A clearly caucasian man with a Japanese name. There is a reason for that. Currently bunked with Evan.

A Japanese/German playwright. Currently bunked with Dylan. Not actually the real culprit of trial 1.

A Belgian who has DJ'd with Sayaka and Ibuki in the past. Currently bunked with Tae Min.

Is killed in the fifth case.

A Japanese boy who doesn't like to use his real voice. Currently bunked with Shohei.

Dies as a victim of the fourth case.

He was one of the two victims in the Second Trial, killed by strangulation.

Voted as the culprit of the First Trial. His knowledge that the Green House door was chained despite never seeing the door itself seemed to indicate it was the correct decision. Turns out it wasn't.

A foul-mouthed American/Canadian girl who always speaks her mind (and flirts with the guys). Currently bunked with Lia.

She escaped the moon, as did Seath and Veeza.

A Japanese girl with a bob haircut and a hand puppet. Currently bunked with Misuzu.

Well, you should never judge people for their appearance, for our body is nothing but a temporary shell!

A Japanese girl with a rather pleasant disposition. Currently bunked with Choko.

A narcoleptic Irish girl who loves to hug. Was homeschooled. Currently bunked with Miyaki.

A victim of the third trial.

A blue-attired girl and friend of a couple of Horizon Station occupants, as well as Shuhei from Class 80-A. Currently bunked with Mallory.

A victim of the First Case.

A girl from Nigeria with no time for romance. Currently bunked with Yukiko.

She was the culprit of the Second Trial, after her roommate talked her into it.

Other Class 80-B Students / Artificial Humans

A Korean boy and 'superhero', one who seems to have actual superpowers. Goes by the alias Oki Tokki, and wears a rabbit helmet. Currently bunked with Alex.

A black-haired American/Japanese girl who isn't talented in any one specific thing, but is good at learning things fast. The youngest girl in the cast at 14 (she skipped a grade or two). Currently bunked with Mirielle (who keeps flirting her in her Lupin persona).

She escaped the moon, and disappears as the latest Ultimate Phantom Thief.

A French girl with a nervous disposition. She has a more extroverted (and flirtatious) persona of Arsene Lupin the 7th. Currently bunked with Sierra (whom Lupin keeps flirting with; no word on Mirielle's thoughts on the matter).

Is stabbed to death in the fifth case.

A muscly Greek with an interest in mythology. Currently bunked with Fukuya/Jason.

Died in Dylan's body in the fourth case, having been brainwashed to kill Ren in his own body in a Mutual Kill.

A Japanese albino. Can sometimes channel the dead. Currently bunked with Zalicka.

She was one of the two victims in the Second Trial, killed by strangulation.

One of the two victims of the First Trial.

A guy from Cuba. The youngest boy in the group at 14. Currently bunked with Kakeru. The actual culprit of the third and first trials, and had a hand in the second.

Fakes his death and impersonates Evan in Ren's body following the fourth case, then kills and is killed in the fifth case.

Pleasure to meet all of you, these are certainly strange circumstances. However I believe we can make the most it, if we remain diligent.

See her section in the Ultimate Despair folder for more.

I was already in one of these sick games, I thought it was all over for me.

After being killed in the Hope's Peak Killing Game, Sayaka was somehow revived (leading to her ghost disappearing from Makoto). She was found frozen by the students of Class 80-A during the third day of the Horizon Station Killing Game and awoken, joining the game herself.

She's tragically killed off again, killed by a bomb implanted in her neck by the Mastermind.

The one controlling Monokuma in the killing game. All that's currently known is they're a young (probably blonde) woman a couple of years older than Class 80 who considers Junko a 'big sis'. Is the real Hiyoko Saionji, still an agent of Despair, and a Hate Sink besides.

Is killed by being sucked out the airlock without a spacesuit shortly before the meteor comes.

Told you I'd come back

A vicious serial killer capable of killing large crowds of people singlehandedly. He was mentioned in passing in the main story. He seems set to have a larger role in Final Horizon, and may even be one of the students on the station.