Character page for the webcomic A Ghost Story. 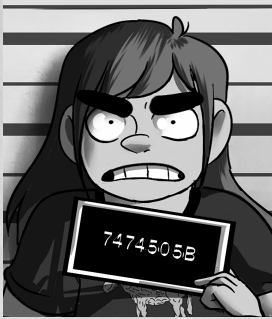 An unlicensed ghost exterminator with a talent for witchcraft and causing trouble. Maxine has an obsession with the supernatural and a love for her job, even though the changing times have made such a career far from lucrative. Combined with her disregard for the law and general recklessness she is as often as much of a danger to those around her as the ghosts she is hired to exterminate.
Advertisement:
Jack 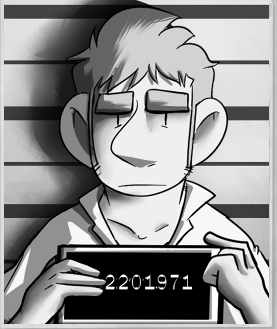 Maxine's partner-in-crime and a disgraced newscaster. Jack lost his former job in a very public and humiliating scandal that left him infamous nationwide. Now he works with Maxine hunting ghosts and trying not to the die. Tormented each day by those who recognize him, nearly killed by ghosts or worse, and constantly in trouble with the law, Maxine is the one bright spot left in his life and he helps to anchor her somewhat to reality.
John Wayne 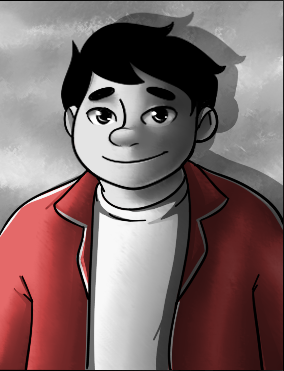 The son of Maxine and Jack's landlords. John Wayne is always willing to lend a hand, and with Maxine around that quality tends to lead him into danger. Friendly and patient to a fault, he has far more tolerance for Maxine's antics than his parents or most people for that matter.
Victoria

A reclusive wealthy author and nominal benefactor to Maxine and Jack. She specializes in fiction and non-fiction works about the paranormal, and has a house full of ghost-possessed inanimate objects as research material - and good company, as she rarely leaves home.
Lucy

A strange, shape-shifter who appears as a grossly deformed human woman. Has a friendship of sorts with Maxine and (to a lesser extent) Jack. Lucy, Alice and Vera knew each other as children, and she seems to be an ordinary human possessed by an unknown entity.
Phil

Long-suffering member of the local police. Unfortunately has Maxine on his beat, leading to frequent - and for Phil, unwanted - encounters.
Advertisement:
Vera

Maxine's longtime best friend. A happy-go-lucky sort who loves baiting Jack, and who has strange, unexplained (even to herself) powers.
Alice

Vera's estranged older sister, who is missing an eye. Works at the local hospital as a nurse. Very reluctantly provides care to Maxine as needed in exchange for her not revealing an amazing power of her own. This power is a healing factor that allows her to survive an auto accident and explosion.
Valdo

A large, laconic Italian-American butcher who has a side trade dealing in various arcane materials for local witches. Has known Maxine for most of her life. Father of Jeremy who does occasional "scouting" for his father as an EMT.
Mrs Qiao

Jack and Maxine's landlady and proprietor of the Chinese restaurant on the lower floor of the building. Usually very upset with Jack and Max over almost perpetual delays in the rent. On good terms with Valdo.