A Certain Magical Index / Scientific Railgun / Scientific Accelerator character index
Main Characters
Index Protagonists | Railgun's Main Cast
Science Side
The Teachers and Students of Academy City | Academy City Founders, Researchers and Law Enforcement
Academy City's Dark Side | The Sisters | Other Science Side Characters
Magic Side
England and its Allies | The Roman Catholic Church | GREMLIN | True GREMLIN | Other Magic Side Characters
Other Characters
Other Light Novel, Manga, and Anime Characters | Audio Drama, Video Game, and Movie Characters
Introduced in New Testament Vol. 10, this group is not to be confused with the GREMLIN organization led by Othinus. This group consists of Magic Gods, or Majins, from multiple pantheons. They have been observing Touma and Othinus' adventures from a hidden dimension, until Aleister Crowley breaks in and confronts them directly. Afterwards, they decide to get involved in the action personally. Their goal is to convince Touma to become their "scorer".

Tropes common to the group: 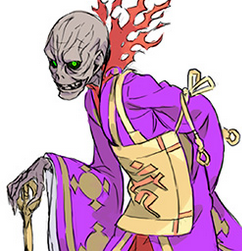 A Majin from Japanese Buddhism. Prior to becoming a Majin, he was a regular Buddhist priest who tried to become a Buddha via self-mummification in order to save all humans. 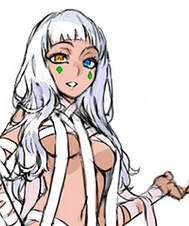 A Majin from the Egyptian pantheon. Nephthys is a Majin born out of the collection of hundreds, if not thousands, of slaves buried alive with their pharaoh putting together every small piece of magic knowledge they knew and had access to in the pyramid. 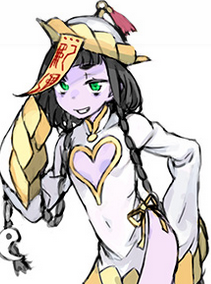 A Majin from the Chinese pantheon. Niang-Niang voluntarily took her own life to strip away the impurity of a worldly life, becoming a Xian.

A Majin from the Vodoo pantheon.

A Majin from the Greek pantheon, Chimera is described as a narcissistic that has completely left the category of "human" in her quest to improve her beauty.

A Majin from the Celtic pantheon. The same king of gods spoken of in Celtic tradition.

A Majin from the Roman pantheon.

A Majin from the Aztec pantheon. Rather than the original Tezcatlipoca of myth, this Tezcatlipoca was created in the 16th century, in order to fight against the Spanish who was mistaken for the original Quetzalcoatl.

A Majin with unknown origins. Lovecraft used it as a reference material, but the fiction and non-fiction got mixed up together so badly that the Forgotten God lost its original form. Research into it was also stopped after people decided there was a connection to Crowley.