Broken Base / Sonic the Hedgehog 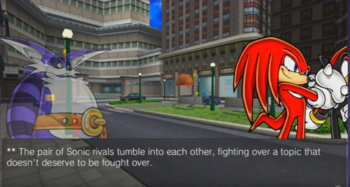 Knuckles and Shadow can't agree that their games are equally awesome? At least we can agree that Tails games are awesome too, which is why he has more games. Wait...

Perhaps a more accurate descriptor would be Atomically Fissioned Base. And each faction hates all of the others. This article best sums up the fandom's splintered state.