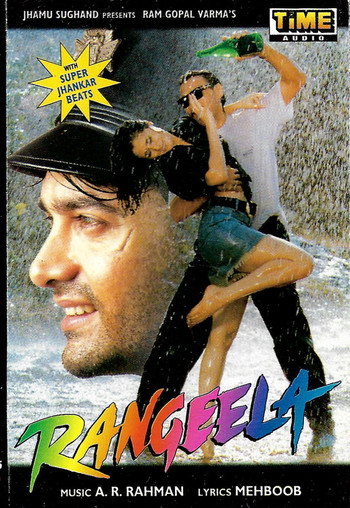 Rangeela (colorful) is a 1995 Bollywood musical romantic film starring Aamir Khan, Urmilla Matonkar and Jackie Shroff. It was the first original Hindi language film to feature A R Rehman as its Music Director. Rehman had until this point mostly scored movies made in South India that were dubbed into Hindi. The movie got a Hollywood remake in Win a Date with Tad Hamilton!.

The plot focuses on Munna, an orphaned Street Urchin from Mumbai’s slums and Millie, his childhood friend and aspiring actress. Millie gets occasional bit parts as an extra in movies, but is a talented dancer, hoping to get her big break. Munna gets by, selling scalped movie tickets. Munna is in love with Millie but Cannot Spit It Out. Millie is discovered by a talent scout while dancing by her lonesome in an abandoned warehouse and is invited to audition for a movie starring famed leading man Rajkamal played by Jackie Shroff.

After a very successful audition, Millie is selected to be Rajkamal’s leading lady in his new film. She immerses herself into her role, but slips farther and farther away from the simple girl Munna knew. Seeing that she seems happy in her newfound fame and with Rajkamal, Munna starts to let her go. But Rajkamal catches wind of this. Will he claim Millie all for himself or will he reunite the two childhood friends?