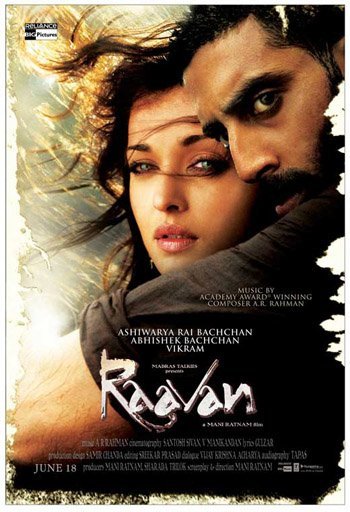 A retelling of the Ramayana, the famous legend of the god Rama, who invades Lanka to rescue his wife from the demon king, Ravana.

This version portrays Ravana in a more sympathetic fashion while Rama is portrayed as an Inspector Javert unwilling to consider Ravana as anything except evil despite copious evidence to the contrary. In the Hindi language version, the Ravana Expy is Beera. He kidnaps Ragini Sharma, wife of policeman Dev Pratap Sharma (played by Vikram). Beera seeks revenge for the death of his sister, who committed suicide after being arrested and raped by Dev's subordinates.

The director, Mani Ratnam, filmed both the Hindi and Tamil versions simultaneously. In the Tamil language version, entitled Raavanan, Aishwarya Rai reprised her role as Ragini, while Vikram portrayed Veera (the name changed slightly due to the phoneme differences between the two languages) and Prithviraj portrayed Dev.

The switching of Vikram's role functioned to highlight the grayness of the hero, since in one film he plays hero and in the other he plays villain. Of course, since most people only saw one version due to the language barrier, the role switching is moot unless you're doing some sort of meta analysis. In a more practical sense, switching Vikram's role was a smart move commercially, since he played the anti-hero (Veera) for the Tamil audience, who know him as a respected actor. By contrast, Vikram is unknown to the Hindi audience, so he played the antagonist (Dev) in the Hindi movie, while the more popular Abhishek Bachchan played the hero.