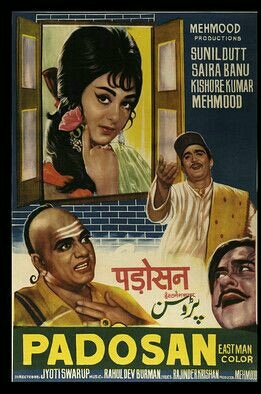 A Romantic Comedy Bollywood movie released in 1968, Padosan (Neighbour) is the story of Manchild Bhola (Sunil Dutt) who falls in love with Girl Next Door Bindu (Saira Banu). He refers the matter to his guru (teacher, in this case music/drama) Vidyapati, played by comedy veteran Kishore Kumar. Vidyapati develops intricate schemes to catch her eye, quickly realizing that the key is to appeal to her love of music - fed by Master Pillai (veteran comic Mehmood in a Funny Foreigner role as a stereotypical South Indian), who we quickly realize is also infatuated with Bindu. The solution is obvious: Bhola can win Bindu's heart by serenading her. Unfortunately, his voice turns out to be only slightly better than the neighborhood donkey.

A second solution is immediately obvious: Bhola can mime singing, while Vidyapati hides in his room and sings on his behalf. This scheme - along with other schemes - works for a while, but eventually all is revealed. Bindu, upset at this betrayal, decides to marry Master Pillai after all, but a quickly rigged fake suicide works to prove that Bindu loves Bhola best, and the two of them end up married and happy.