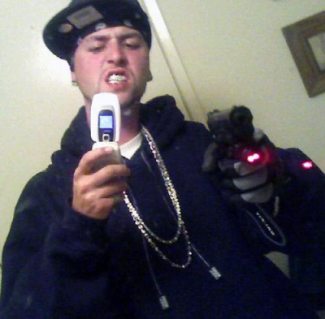 Our hero.
These are text messages I exchange with my 17 year old cousin Bennett. He is a white boy that thinks he's a Crip, is currently unemployed, has a girlfriend named Mercedes, and is one of the most unintentionally funny and brilliant souls on the planet.
By the way, this blog is 100% real.
— Mac

As you may know, American teenagers living in The New '10s get bad press from pretty much everyone. The criticisms? Some complain about their attitudes and general lack of respect. Others call them illiterate and lazy. Still more cite teens' obsession with sex as the sign of a degrading society. Then, of course, you get a vocal bigoted few who simply throw their hands up in the air and blame Hip-Hop.

Is any of this true? Maybe.

...Especially maybe if you're Bennett.

What began as a low-key Tumblr blog recounting the musings and misadventures of the author's young, wannabe-gangsta cousin skyrocketed to viral fame as viewers realized that Bennett's antics were a lot funnier than expected. As of early 2012, Texts From Bennett has a massive Facebook and Twitter following, as well as its own merchandise. You can find it here.

Now if only we could be sure whether the whole thing is made up or not...