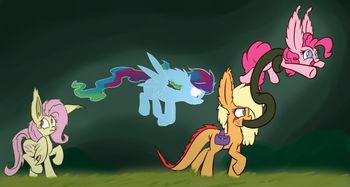 Pinkie Pie: So I'm a psychic and last Tuesday I had a vision from Celestia herself and she told me that all the Equestrian ponies and all you Everfree ponies should become best friends forever! And I was like 'Okie-dokie!'. So it's totally my destiny now to round up a adequately diverse and delightfully relatable gaggle of Everfree ponies and learn them the wondernessfullness of Equestrian civilization while at the same time teaching us Equestrian ponies the terrificness of our Everfree counterparts!

is a Tumblr webcomic and Ask Blog by Heir of Rick

, based on My Little Pony: Friendship Is Magic.

The comic takes place in an alternate Equestria where there are two different subgroups of ponies: Equestrian ponies (the 'normal' ponies seen in the show) and Everfree ponies, a diverse group of ponies that have traits of fantasy creatures and monsters.

In this universe, Pinkie Pie is a psychic Equestrian pony who is on a mission to make friends with Everfree ponies, and attempt to reconcile the two groups. The rest of the Mane Six appear as Everfree pony counterparts of their canon selves, each with the traits of a different creature from the show:

The comic is deliberately lighthearted in tone with a cartoonish atmosphere, and doesn't take itself too seriously. Pinkie Pie can receive questions from the Tumblr audience through her Crystal Ball, and the Monsters are also usually happy to answer if they're near it.

There are also some non-canon fanworks based on the comic: