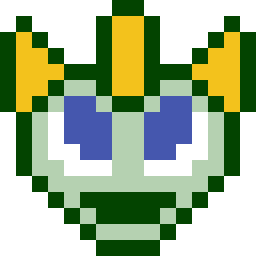 Are these colours familiar, or is it your imagination?
Advertisement:

What is there to say about Froghand

that may be expressed in such few words? At the same time as it's unabashedly vulgar and laced with absurd stories that are tangentially related to the subject at hand, it manages to be inspirational and sincere while still maintaining a good sense of humour, even when going deep into topics that would normally bore even the most interested reader. Written and designed by one faceless, nameless, bisexual

upstanding young bloke named Froge (and not "Froghand" as so many have been misled), the entire blog, in its hundreds of thousands of words of glory, is dedicated to the Public Domain

, because Digital Piracy Is Okay.

He talks about every subject with the full respect it deserves, such as 6,000 words

about The Beginner's Guide (which caused the developer to read his blog), and his 21,000 word rant

against Valve Software, which caused him to be banned from numerous subreddits

. Even amongst this, he manages to sneak in a kind article about something else, such as a satirical review about poorly-drawn berries

at the request of a friend. His audience is few but his acclaim is great; he self-describes

as the "Longform Zero Punctuation", and takes inspiration

from so many more!

He currently focuses on reviews of games and books, with occassional articles detailing something entirely different so long as it fits the "Reviews and Culture" index. There's also a "Big Ups and Fuck Yous

" section on the main page, which is devoted to both praising subjects he finds worthy of admiration, and to bringing attention to the ills of the world, or at least the Internet, or at least something he found mildly annoying. Both update every single day, and it's a rarity for him to skip one (12 / 180 days were missed, according to the First Quarterly Froge Ball

And everything can be found on his Neocities page

, featuring whatever shit he's posting nowadays. Given his desperation for lewd cat pics

, you can also e-mail him at the address at the bottom of his blog, and nowhere else, so don't search for familiar names using this page history.

Froghand shows off THESE examples: