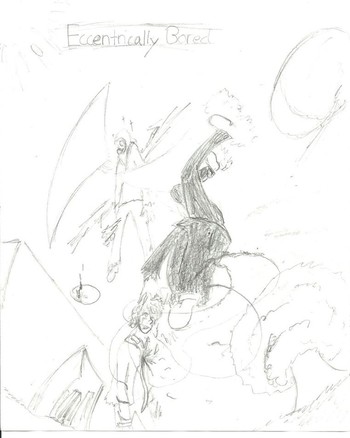 Eccentrically Bored tells the story of Joey Steward, a college student who finds himself drawing the attention of dangerous supernatural entities.

The story initially follows the format of a slenderblog. Joey goes about his life, and begins catching glimpses of the Slender Man watching him. However, at the same time, there is a serial killer terrorizing his community, and the victims of said killer seem to be appearing alive and well, and attacking Joey with murderous intent...

Being one of the earliest works in The Fear Mythos, Eccentrically Bored helped pioneer a number of the concepts in the series— most notably the concept of the Grand Game and the Fear known as the Archangel. The story is very basic and threadbare compared the blogs that would come afterward, but the story is still read by fans and other Fear-writers both for its historical significance, and the fact that it spawned a much more well known sequel: Hidden in the Trees.

This blog contains examples of