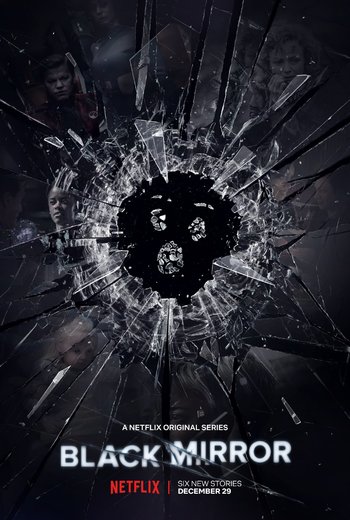 A fourth series was announced shortly after the third series aired, with Charlie Brooker later revealing that he had been writing it since July 2016. He also said the series episodes would be more diverse owing to them being written during the height of the US 2016 Presidential Election campaigning, including a bit more optimism because, to quote, "[he didn't] know what state the world's going to be in by the time these [episodes] appear, [so he didn't] know how much appetite there [would] be for nothing but bleak nihilism" — he thought that the world could very well have become so dark with Donald Trump in charge that Black Mirror needed to be lighter.

The series was released slightly over a year after series three, for post-Christmas 2017 on December 29th. Not only did this mean that everyone would be able, and anticipating, to watch, but also that it could incorporate the Holiday season into its advertising. The idea of Black Mirror being a depressing look at the future was played with in a Netflix short that was wishing everyone a Happy New Year, typically an optimistic look at the future, by juxtaposing clips from past episodes with real events that happened in 2017.

The fourth series also had a greater number of contributors, with Rashida Jones writing an episode, Jodie Foster directing another, and a story fragment from yet another being adapted from a short story by Penn Jillette. It can also be seen to once again deal with greater issues that more concern misuse and abuse of technology by assholes, rather than purely be about corrupt technology. Some morals that may be present (but it's still Black Mirror, so maybe not) include how the oppressed can easily become the oppressors, given the right power — something ever increasing in real society; a discussion on how there is no right way to do parenting, but forbidding everything will wind up terribly in any number of ways; the negatives and often illegality of new science and technology trials, and institutionalized criminal racism; and that true love can conquer all.